Mercy Fridays: A Year of Stories, Tears and Hugs

Tears, prayers, caresses — but most of all, listening — were the hallmarks of Pope Francis’ “Mercy Friday” visits during the Year of Mercy. 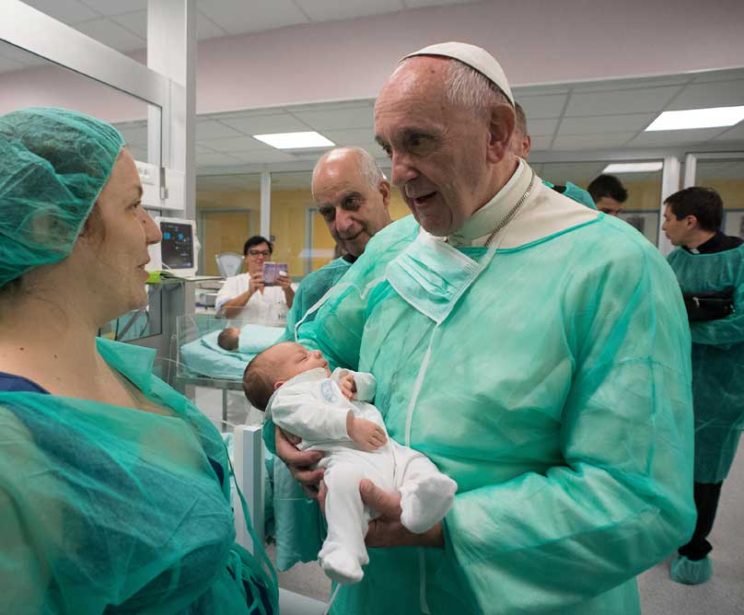 Pope Francis holds a baby as he visits the neonatal unit at San Giovanni Hospital in Rome Sept. 16. The visit was part of the pope’s series of Friday works of mercy during the Holy Year. (CNS photo/L’Osservatore Romano)

As the jubilee began last December, Pope Francis said he would ditch the media one Friday afternoon each month and personally try to give life to the corporal and spiritual works of mercy.

Throughout the year, he used his weekly general audiences and monthly Saturday jubilee audiences to teach about the reality of God’s mercy and the obligation of sharing mercy with others.

But the Mercy Friday visits—even the two that were not held on a Friday — were about presence. Almost every month throughout the year, the pope visited a group of people — people recovering from addiction, women rescued from prostitution, infants in a hospital neonatal unit, and others — as his own expression of the corporal works of mercy. The Mercy Fridays gave them a chance to tell the pope their stories and, usually, to share a late afternoon snack with him.

Nearing the end of the Year of Mercy, Pope Francis paid a visit to seven families formed by men who left the priesthood to marry. The Vatican said the visit was a sign that God loves and is merciful to everyone experiencing difficulty.

“The Holy Father wanted to offer a sign of closeness and affection to these young men who made a choice that often was not shared by their fellow priests and families,” the Vatican said.

After serving in parishes, the Vatican said, “solitude, incomprehension and tiredness because of the great requirement of pastoral responsibility put in crisis their initial choice of priesthood”. The crises were followed by “months and years of uncertainty and doubts that in many cases led them to believe they had made the wrong choice with priesthood. So they decided to leave the priesthood and form a family”.

Pope Francis entered the apartment and was greeted by the priests’ children, who embraced him. The adults, “could not hide their emotion”.

The former priests and their families did not feel judged by the pope, the Vatican statement said, but felt his closeness and affection. He listened to their stories and paid particular attention to the concerns they raised about “juridical procedures”, apparently in reference to the process of releasing a priest from his priestly promises.

Pope Francis’ “paternal words reassured every one”, the Vatican said. “In this way, once again, Pope Francis intended to give a sign of mercy to those who live in a situation of spiritual and material difficulty, showing the obligation to ensure no one feels deprived of the love and solidarity” of the Church’s pastors.—By Cindy Wooden, CNS