GUNTHER SIMMERMACHER presented the Rhythm & Truths music show on Radio Veritas a while back. Here he discusses some of the songs he played on the  Christmas special broadcasts and his reasons for choosing each song.

I finally achieved a long-standing ambition in August this year: to present a music programme on radio, to share with others my love for all kinds of popular music, from almost all genres and all eras. With Radio Veritas, my brief for the Rhythm & Truths show was to put together music according to a weekly Christian theme (such as prayer, Jesus, Justice and Peace, praises and so on). It was rather good fun, though labour intensive, to search my eclectic music collection for theme-appropriate songs, and to research the background of some of them, working on the assumption that behind every song, there is a story. 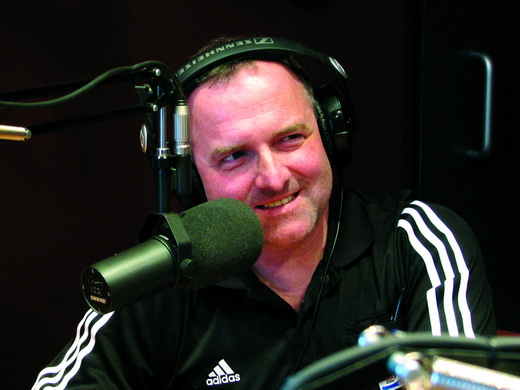 The oldest song I have played in the first 16-episode season of Rhythm & Truths dates back to 1906, a recording of the hymn “Nearer My God To Thee” by a fellow named Richard Jose, who in his younger days sang in the saloons of the real Wild West. On the other end of the spectrum, several other songs I played were released just this year’proof that in popular music, the message of faith still gets heard.

The first season closed with two shows of Christmas music. That excluded chestnuts roasting over open fires, jingling bells, mommas kissing Santa Claus, heartbreaks from last Christmas, Rudolph the Red-nosed Reindeer, or idle speculation about snow falling in Africa this Christmastime. The focus was on the feast of the Nativity, its meaning and celebration. Some were pop interpretations of famous hymns. “Silent Night” featured twice in very different versions. The Temptations sang it straight; in the other version, Simon & Garfunkel’s quiet harmonies echo the peace of the song while over them a broadcast of the 7 O’clock news is played that speaks of little by way of peace. It is perhaps the most poignant of all version of “Silent Night”.

Every year we hear the slogan “Put Christ Back Into Christmas”. And it is right to commend the Knights of da Gama for their effort to place the focus on the reign of the new-born king, not on the supremacy of mammon. But when last was Christ actually in the temporal celebration of Christmas? The country singer Red Foley made the same command, “Put Christ Back Into Christmas”, in 1953, which suggests that the Saviour was absent then already. Indeed, in the 17th century, the puritan tyrant Oliver Cromwell banned Christmas in England because the feast was an excuse for debauched behaviour by the rabble, who at that time were allowed to play tricks on their supposed betters. Even then, the focus was not on Christ. Still, Red Foley was going to stick to his guns, and in his song insisted that you don’t wish him “Happy X-Mas” or “Happy Holidays”.

There actually is nothing wrong in itself with the usage of X-Mas. The first letter in the Greek version of the name Christ is the Chi, which the Romans tendered as an X. So X came to be an abbreviation of Christ which was used even in many New Testament manuscripts).

The great gospel/soul group The Staple Singers also lamented the commercialisation of Christmas in their 1970 song “Who Took The Merry Out Of Christmas”. They might have agreed with Cromwell that Christmas is pointless if it lacks sense of the holy. The Staple Singers decried both war and commercialism. There’s a great line early about humans trying to make it to Mars: “Searching for light but can’t seem to find the right star”. The right star, of course, is born in Bethlehem. And there’s another complaint about how Christmas is treated, and Catholics will agree with it, as the Staples Singers scoff at the secular distortion: “Making believe he was just another baby boy.”

One of the stranger contemporary singers is Sufjan Stevens, a practising Christian (of High Anglican background, I’ve been told) who is probably most popular among non-believers. Some years ago the Detroit-born singer-songwriter started a custom of recording acoustic Christmas albums for his family and friends. He burnt the recordings on to CD and sent those out instead of Christmas cards. Of course, his fans wanted to get their hand on those as well, so a few years ago he released a 4-CD of these private recordings.

The song which we heard on Rhythm & Truths was “Lo How A Rose Ever Blooming”, the English version of the German hymn “Es ist ein Ros entsprungen”, which goes back at least to 1599. In Germany, Catholics sing a version dedicated to the Blessed Virgin, while Protestants dedicate it to Jesus.

A Christmas standard which is younger than many people think is “Mary’s Boy Child”, a song which in SA is now most commonly associated with Boney M through their Christmas album, which is as ubiquitous as it is ghastly. The song is just over 50 years old. It was first recorded by Harry Belafonte (who was raised a Catholic) in 1956, and was written by Jester Hairston, who died in 2000 at the age of 98. Hairston also wrote the “Amen” song which Belafonte’s friend Sydney Poitier sings with the East German nuns in the film Lilies Of The Field (so that isn’t an old spiritual either).

In 1960, the folk singer Odetta posed a rather good question with her song, “What Month Was Jesus Born In?”. We celebrate Jesus’ birthday on December 25, but we don’t really know when he was born. The gospels don’t tell us, and all sorts of theories have been advanced for the date of the most famous birth in history.

Our atheist friends tend to claim that Christians appropriated for Christmas the Roman pagan feast of Saturnalia, a rather nasty week-long affair of lawlessness that culminated in the human sacrifice of a citizen. The trouble with that idea is that Saturnalia ran from December 17-23. Nor is there persuasive evidence that Christians usurped the pagan festival of Sol Invictus, or Mithra’s birthday. Unimportant though the exact date of Christ’s birth is, Odetta unsurprisingly takes it that Jesus’ was born in the last month of the year. So we may as well stick with that.

Rhythm & Truths is off the air now, though I believe that repeats will be broadcast periodically until the show returns next year.

In the meantime, the playlists for every show and videos and introductions to most of the songs that have been played are available on the Rhythm & Truths website: rhythmandtruths.wordpress.com

Thank you for reading. Goodbye and be Saved.

Where Do Our Christmas Traditions Come From?

How Do They Celebrate Christmas around the World?

The Western view of Christmas is becoming increasingly uniquitous, partly thanks to American TV and movies. However, most countries have...