How Do They Celebrate Christmas around the World?

The Western view of Christmas is becoming increasingly uniquitous, partly thanks to American TV and movies. However, most countries have their own peculiar traditions. GUNTHER SIMMERMACHER looks at how Christmas is celebrated in Ethiopia, Finland, Iraq, Jamaica, Kenya, Latvia, Lebanon, Denmark, India, Germany, Lebanon and other countries. 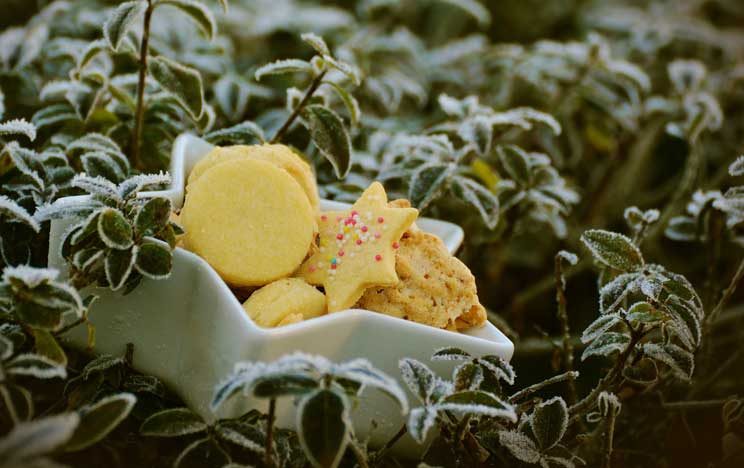 FINLAND
The BUZZ: After a weeks-long build-up, Christmas officially kicks off at mid day of Christmas Eve with a televised message by the mayor of Turku. Many families precede their Christmas dinner on December 24 with a sauna. Around Christmas, many families visit the graves of loved ones to place candles on the tombstone.
The LOOK: Straw decorations are very popular. Christmas trees often are decorated with apples and sweets. Many homes set up a bird-feeding station on a pole.
The FOOD: At a Finnish Christmas, you wouldn’t be surprised to eat roasted ham, dried cod, and rice pudding.
Fancy THAT: Finns claim Father Christmas as their own, claiming he lives in Lapland (Danes will argue he lives in Greenland). Thus, In Korvatunturi, north of the Arctic Circle, there is a theme park called Christmas Land, featuring Santa, his reindeer and elves.

INDIA
The BUZZ: India’s Catholics attend midnight Mass, while Protest-ants tend to have their services on Christmas Day. Children are usually quizzed about the nativity story before receiving their gifts. Many children also celebrate Christmas by setting off firecrackers.
The LOOK: Nativity scenes and Christmas trees are widespread. In some parts of India, banana and mango tress are decorated, with the leaves of the latter being used for indoor decorations. Some Christians use small clay oil lamps, a custom borrowed from the Hindu feast of Diwali.
The FOOD: There is no typically Indian Christmas food. Dishes such as roast duck, chicken masala, mutton chops and prawns are popular.
Fancy THAT: Although India’s Christian population is tiny, Christmas is a public holiday. Hindu shopkeepers will decorate their shops, and some even engage a Santa Claus to amuse (and attract) children.

KENYA
The BUZZ: The religious significance of Christmas is still taken seriously by Kenyan Christians. Thus, church attendance is virtually obligatory, even among those who otherwise don’t go to church. Christmas is celebrated on the 25th. On Christmas Eve, many children will go from home to home singing. The gifts they receive, usually money, is then given to their church as a Christmas offering.
The LOOK: Nativity scenes are popular. Homes and churches are decorated with bright balloons, ribbons, flowers and greenery.
The FOOD: Extended families usually come together to roast a goat, or other meat (nyama choma), with chapatis (a flat bread).
Fancy THAT: Many Kenyan children try to replicate snow by shredding chicken feathers. 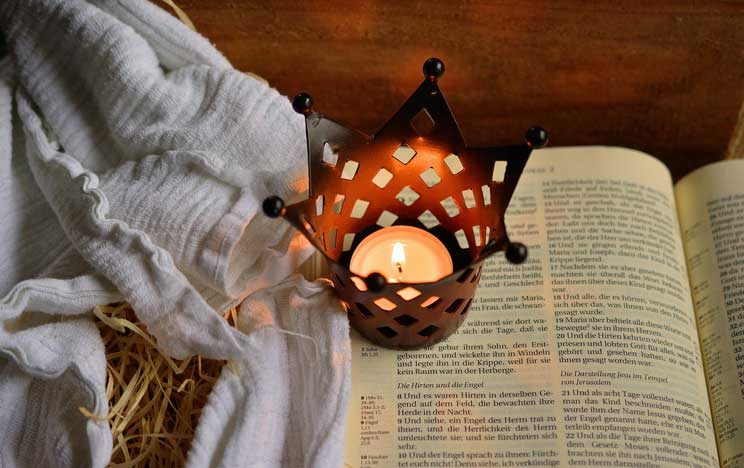 LATVIA
The BUZZ: Christmas is celebrated on the 24th, when children receive their presents after dinner  but not before they have recited a poem (a custom that is widespread throughout northern Europe). The tradition of the yule log, symbolising the burning of last year’s worries, remains popular in Latvia.
The LOOK: Rooms are decorated with straw ornaments, pine branches, bright cloth and juniper berries.
The FOOD: The traditional Christmas meal is boiled pig’s head, served with sauerkraut. Also popular are brown lentils with bacon, and sausages. As in Germany, gingerbread is popular at Christmas.
Fancy THAT: The first recorded instance of a pine being used as a Christmas tree is from Latvia, in 1510. Some legends falsely involve Martin Luther in that story.

LEBANON
The BUZZ:: Children receive their presents on Christmas Eve. Before the extended family gathers for lunch on Christmas Day, friends visit each other on Christmas morning. Guests are likely to be offered coffee and liqueurs. Bonfires are held in town centres, an occasion for meeting friends, singing carols and telling stories.
The LOOK: A few weeks before Christmas, Lebanese Christians will plant seeds in cotton wool or flowerpots, in time for them to bloom around Christmas. The plants form part of traditional Lebanese Christmas decoration.
The FOOD: If a family has had a new baby during the year, a special dessert called mughli is prepared.
Fancy THAT: At Christmas, a dance called the dabkeh is performed by traditionally dressed young men and women who hold hands in semi-circles.

GERMANY
The BUZZ: In Germany, Santa Claus visits twice: on December 6 in the form of St Nicholas (the model for Santa), who places small gifts in specially polished shoes, and again in the form of the Weihnachtsmann (Christmasman) on Christmas Eve. During advent, most German towns have a Christmas market, with a trademark smell of roasted chestnuts. On Christmas eve, after dinner, children receive their presents (the Bescherung). Usually, they are ushered out of the room while adults set up the gifts, and light the Christmas tree candles.
The LOOK: Traditionally, the German Christmas tree features real candles, for which special holders can be bought, as well as sweets and pine cones. The advent wreath is ubiquitous (but with red candles), and nativity scenes are common, especially in southern Germany.
The FOOD: Typical Christmas main courses are roast goose or carp. Sweet stuff includes Stollen (a heavy fruit cake) and Lebkuchen (similar to gingerbread).
Fancy THAT: Many German Christmas traditions have been exported to the English-speaking world, mainly thanks to the German-born Prince Albert, consort to England’s Queen Victoria. 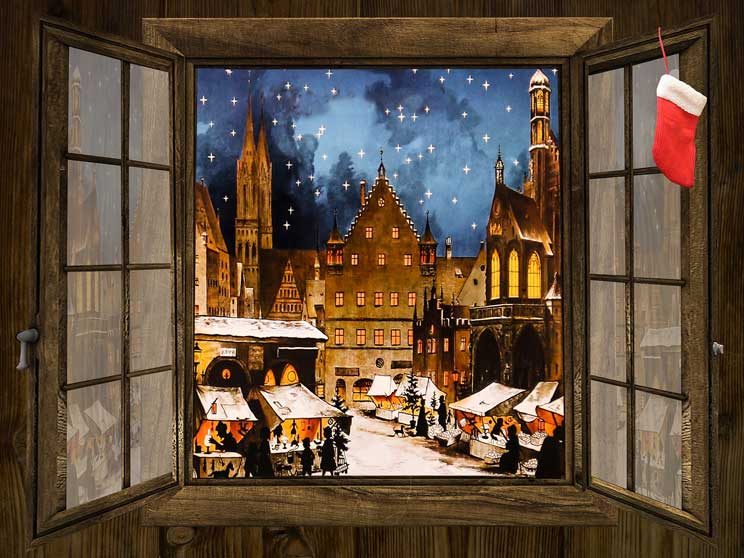 JAMAICA
The BUZZ:: The Western traditions predominate, although in rural areas the jonkanoo celebration a tradition with African roots rings in Christmas, which includes parades of masked men.
The LOOK: Not much different from what one may find in most former British colonies.
The FOOD: Curried goat, oxtail, and roasts, accompanied by gungo beans are popular, followed by watermelon. A Jamaican Christmas specialty is spicy rum or wine-based sorrel.
Fancy THAT: Jamaica is the land of rastafarianism and Bob Marley so one is likely to hear Christmas songs and carols set to a reggae beat.

DENMARK
The BUZZ: As in most northern and central European countries, the celebrations proper in Denmark begin on Christmas Eve, though much socialising takes place over the lighting of advent candles. On Christmas Eve, the family has dinner, sings carols around the Christmas tree and exchanges gifts.
The LOOK: Decorations are often home-made out of straw, coloured paper and wood. The Christmas tree is decorated only on the 24th, and children are not allowed to see the decorated tree until dinner.
The FOOD: Stuffed goose is to the Danish Christmas dinner what the turkey is to Americans. For dessert, many Danes have rice pudding (grod), with one almond which is supposed to bring its finder luck. The Christmas plate, filled with fruit, nuts, sweets and delicacies is an old Danish tradition.
Fancy THAT: Children will leave out a saucer of milk and grod to appease Father Christmas’ (Julemanden) mischievous elves (Juul Nisse), who are depicted as wearing grey clothes with red hats and stockings.

ETHIOPIA
The BUZZ: Ethiopian Christians are mostly Coptic Orthodox, and their Christmas (or ganna) is celebrated on January 7. The day before, Christians gather in public spaces to pray and chant, a celebration that lasts through the night. Next day at church, congregants receive candles with which, once lit, they circle the church three times. The Mass can last three hours, throughout which the congregation stands. Little importance is attached to gifts, with children usually receiving new clothes.
The LOOK: The Band Aid charity single Do They Know It’s Christmas? observed rightly that there won’t be snow in Africa this Christmas-time (except on Mount Kilimanjaro). Ethiopia is thus spared the sight of sweating Santas and incongruous reindeer. Generally, Ethiopian Christians don’t go in for ostentatious Christmas decor.
The FOOD: The typical Christmas meal is doro wati,: spicy chicken dish served on an injera (comparable to the Indian roti), a pancake on which the food is held, and with pieces of which the stew is eaten.
Fancy THAT: In most Ethiopian churches, woman and girls sit apart from men and boys.

GREECE
The BUZZ: St Nicholas is an important figure in a Greek Christmas  but rather as the salty patron saint of sailors than as the warmly dressed navigator of snowy terrain. In this Orthodox country, priests are often asked to bless houses. On Christmas Eve, groups of children go from house to house performing kalenda (carols accompanied by percussions) in return for dried fruit, sweets or even small gifts.
The LOOK: The Christmas fir tree is not widespread, but evergreens are decorated with tinsel and a star. Most homes sport a wooden bowl containing holy water with a cross wrapped in basil sprigs suspended over it with wire.
The FOOD: A 40-day fast precedes Christmas. At Christmas, pork is the traditional meat. Also popular is the decorated, spicy Christmas bread, Christopsomo.
Fancy THAT: While children in the West receive their presents on December 24 or 25, and most Orthodox on January 6 (the feast of the Epiphany), Greek children receive theirs on January 1, St Basil’s Day.

IRAQ
The BUZZ: The Christian community in Iraq is tiny, so Christmas passes by the Iraqi public almost unnoticed. On Christmas Eve, Christian families gather to listen to the story of the Nativity, often recited by one person while the others hold candles. On Christmas day, clerics carry figures of the Christchild in a procession. Often, the priest will bless one congregant, who blesses the next, who in turn blesses another and so on.
The LOOK: While decorations tend to be discreet, bonfires are traditional on Christmas Eve and on Christmas Day.
The FOOD: Iraqis have no special Christmas food.
Fancy THAT: Thornbushes are burnt on a bonfire on Christmas Day as indicator of fortune – if it burns down to ashes, good luck will follow. 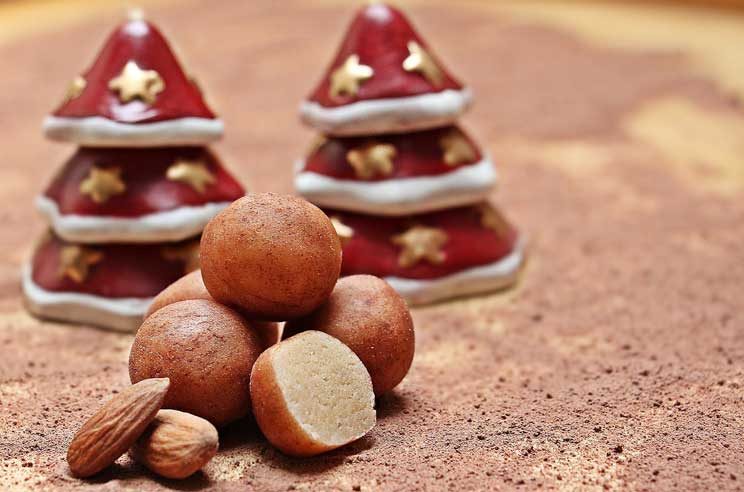 JAPAN
The BUZZ: Less than 1% of Japan’s population is Christian, so what traditions exist are imported courtesy of the pervasive American culture. While Santa is beginning to assert himself, gifts are brought by the Japanese god Hoteiosho, who has eyes on the back of his head (useful for seeing who was naughty and nice). Japanese Christians do not emphasise the family on Christmas, but good deeds.
The LOOK: Decorations usually reflect the American style, but origami (folded paper) swans are popular. Decorations are removed on December 26 to prepare for the New Year, an important time for Japanese.
The FOOD: Because of a lack of tradition, Japan has no typical Christmas fare. Special Christmas cakes are becoming popular, however.
Fancy THAT: The piece of music most closely associated with the Christmas season in Japan is Beethoven’s 9th Symphony.

FRANCE
The BUZZ: Throughout advent, Christmas markets sell seasonal crafts and fare. After Midnight Mass  signalled by ringing bells  the feast, begins. While children receive their gifts at Christmas (and before that on St Nicholas Day on December 6), adults tend to exchange gifts on New Year’s Day.
The LOOK: Nativity creches are ubiquitous, with santons (little saints), local personalities and, alas, even celebrities finding a place alongside the Holy Family and the shepherds. Christmas trees often sport big, red ribbons and  fire hazards notwithstanding  candles.
The FOOD: If it is France, the food will be good and plentiful. What exactly a meal is likely to consist of depends on regionality, though poultry is a good bet. And, of course, good wine.
Fancy THAT: Pere Noel (Father Christmas) is accompanied by Pre Fouettard, who offers counsel as to the behaviour of a child throughout the year.