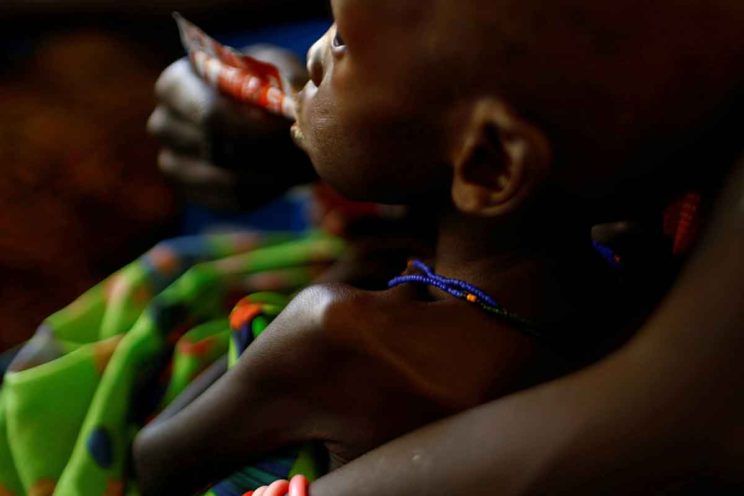 People are beginning to starve to death in South Sudan.

The United Nations has formally declared that a state of famine exists in this east African nation, with 100,000 people immediately facing starvation, and 1 million additional South Sudanese teetering on the brink of famine.

“Many families have exhausted every means they have to survive,” said Food and Agriculture Organisation representative in South Sudan, Serge Tissot.

These predominately farming people have lost livestock, sold farming tools and eaten their stock of planting seeds. They have nothing left to live on.

And as things stand now, this monumental human crisis will get worse.

The U.N. warns “The total number of food insecure people is expected to rise to 5.5 million at the height of the lean season in July if nothing is done to curb the severity and spread of the food crisis.”

South Sudan, the world’s newest nation – just over five years old – has been struggling to survive since its birth.

Not only is it one of the very poorest countries on earth, it has also suffered during most of its short life from an ongoing civil war.

Just days ago, the Catholic Bishops of South Sudan issued a pastoral message to their suffering brothers and sisters saying “Our country is not at peace. People live in fear. The civil war … continues. Despite our calls to all parties, factions and individuals to stop the war, nevertheless killing, raping, looting, displacement, attacks on churches and destruction of property continue all over the country. … There is a general lack of respect for human life.”

The South Sudanese bishops then note that while poor rains have affected parts of the country, the famine is man-made. And with deep insight they say, “Hunger, in turn, creates insecurity, in a vicious circle in which the hungry man, especially if he has a gun, may resort to looting to feed himself and his family.”

President Trump wants to increase already astronomically high military spending by $54 billion, while making deep cuts in poverty-focused foreign aid, which is a tiny portion of the U.S. budget – less than 1 percent.

Now consider that Yemen, Somalia and Nigeria are on the brink of famine

I know, it’s overwhelming. But what do you think it’s like for them?