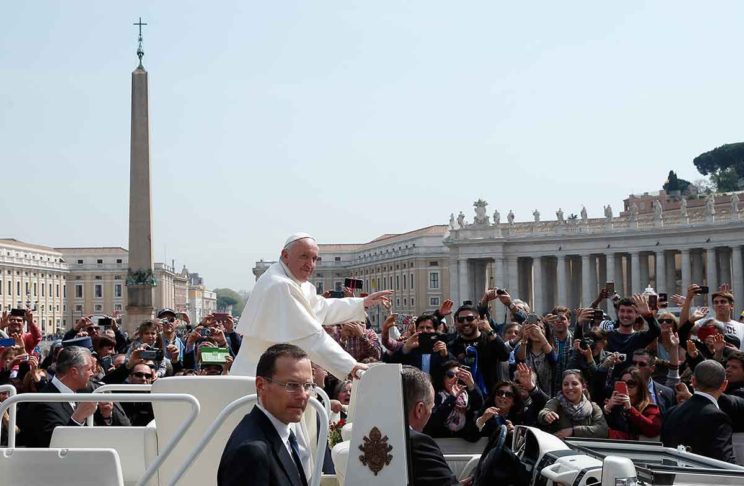 Pope Francis leaves his general audience in St. Peter’s Square at the Vatican

Christians must give witness to hope through their lives as Jesus did and make room for him in their hearts to fight evil by doing good to others, even their enemies, the pope said at his weekly general audience.

“The mafiosi think that evil can be overcome by evil. They take revenge; they do so many things that we all know. But they do not know what humility, mercy and meekness are. And why? Because the mafiosi have no hope,” he said.

Arriving in St. Peter’s Square, Pope Francis made his way through the crowd of 15,000 people, greeting individuals and even making a quick stop to sip some mate tea offered by a group of pilgrims from his native Argentina.

Arriving at the stage, the pope spotted a familiar face among the Argentine pilgrims, and warmly embraced an elderly woman and spoke to her while other people in the group reached out to touch him.

Continuing his series of talks on Christian hope, the pope reflected on a verse from the First Letter of St. Peter, in which the apostle calls on Christians to “always be ready to give an explanation to anyone who asks you for a reason for your hope.”

The “secret” to understanding this hope, the pope said, is that it is rooted in the paschal mystery of Christ’s victory over death.

“Our hope is not a concept nor a sentiment; it is not phone call or a pile of riches,” he said. “No, our hope is a person, it is the Lord Jesus who we recognize alive and present in us and in our brothers and sisters.”

A person who lacks hope, the pope added, is incapable of giving or receiving the “consolation of forgiveness” and unable to make room for Christ in their hearts.

St. Peter’s assertion that “it is better to suffer for doing good” than doing evil, he continued, doesn’t mean that it is good to suffer, but that suffering for the sake of good means “that we are in communion with the Lord.”

Christians who wish to follow Jesus’ example are called to love and do good, even to “those who do not wish us well or even harm us,” Pope Francis said.

“It is the proclamation of God’s love, an immeasurable love that is unending, that is never lacking and constitutes the very foundation of our hope,” he said. By Junno Arocho Esteves Catholic News Service