The Revealing Diary of a British Trooper 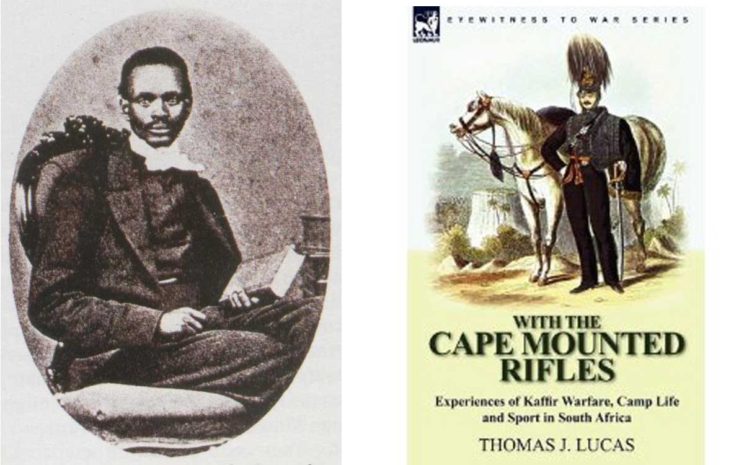 Thomas J Lucas, a trooper in the Cape Mountain Rifles of the Cape Colony during the mid-19th century, kept a private journal. He began it when he was shipped off from London on the ship Idia to what they then called Kaffiland, the Cape Colony.

Like most Brits in that era, he was impressed only by things that served the advancement of the British empire.

This is how he describes the journey to Cape Town: “[The] ordinary crew of the Idia was supplemented by 40-50 Lascars [Indian sailors], who were shipping back to Calcutta.” Their manners and “varied picturesque costumes, made our decks quite gay in the tropical sun”.

But he didn’t like them, describing them as “useless, lazy, unmanageable indolents in bad weather [who] even refused to go aloft and only encombouring the sailors who managed to do work done by two Lascars in bad weather…” The “encomboured” sailors, naturally, were European.

He goes on in such colourful language, categorising the “pappist” [sic] — that is, Catholics — as lazy drunkards

“Among the most inveterate victims to mal de mer [is] an old Roman Catholic priest, one Fr Watkins, a Welshman, who in ordinary times was the life of the saloon…doing duty in the interior of the Cape for more than 30 years.”

Arriving in Cape Town, Lucas does not bother much with dates, but the city’s “imposing headland of Table Mountain…laying the table cloth…from a solid cloud of dazzling white vapour hanging on its summit” seems to have improved his mood, even almost against his prejudices.

Malay servants became his weak spot, for their docility and industry. He describes this affection in the same manner as those today who know how to conceal their prejudices when they express their preference for Somali, Malawian, Zimbabwean or other immigrants whose cheap labour they exploit with impunity.

At a remove of more than 150 years, the language is familiar, with the “whale boats plying full of Malay in picturesque costumes and reed hats [lending] life and colour to the scene” of alighting passengers.

But to Lucas, the “Hottentots” (Khoisan), who refused to indenture themselves to the Europeans, were useless drunkards who preferred to beg the streets for “Cape Smoke” (peach brandy). “You find them strewn along the taverns having dropped face down from doppie [sic] swigging, as such can’t avoid driving over them”.

After our orderly officer gets off in Algoa Bay (now Port Elizabeth} en route to the then-capital of the region, Grahamstown, his new heroes are the amaMfengu because they assume the tasks done by the Malay in Cape Town.

They have “done us good service as yeomen”; they “amass money by plying as carriers on the main roads…are very useful as surfmen, busily employed to unload boats, working half-naked and always good tempered and willing”.

And they are, literally, the lifeline of the British soldiers who employed them to track amaXhosa and generally familiarise the soldiers with the terrain.

Lucas boasts about how intelligent they are in learning the “tools of civilisation”.

This condescending admiration persists until the advent of the Kat River Rebellion, where amaMfengu and Khoisan people joined the war on the Xhosa side, handing the amaNgqika chief Maqoma the only decisive victory against the British, at the Battle of Waterkloof.

At that point Lucas resumes the cussing language, adding “treacherous Fingoes” to his standard vocabulary: “indolent”, “useless”, “bastards”, and all.

He mentions a horse sale transaction with the only “thrifty and industrious Kosa [Xhosa]”, named Festiri, as an example of, as he puts it, “a kaffir of the future”.

Festiri belonged to one of the first Xhosa families who converted not only to Christianity but also to what we now call Western civilisation. He was the first “to take up the plough” together with irrigation schemes to guarantee bumper harvests. Festiri was the first to put glass panes on his windows — hence his name, which is derived from Afrikaans “venster”.

Festiri belonged to the illustrious Xhosa family, the Sogas. He was the one who taught his younger, the famous Tiyo Soga — the first Western trained clergy in the Southern Africa — how to read and write.

Old Soga, Tiyo’s grandfather and counsellor to the king Ngqika, was the son of Jotella, Maqoma’s coeval and friend. These connections have a tragic side, and were also the reason why Tiyo fled to Scotland for elementary education.

Tiyo, the marked man — standing on wings between the distrust of both the blacks and whites—holds the distinction

of being only the second African man to be ordained a clergyman by a British Church, in 1856 (the first being Samuel Ajayi Crowther who went to work as a missionary in Sierra Leone).

Tiyo was the first black African to wear a red toga of the graduates of Glasgow University.

The Sogas grew up around the missionary station of Thyume, close to what today is known as Keiskama Hoek. The missionary satiation was founded by John Brownlee of the Glasgow Missionary Society in 1820. I’ve mentioned Tiyo in this column before, but only as an author of very famous Xhosa hymn: “Lizalis’ Indinga Lakho, Nkosi Yenyaniso” (Fulfil Your Promise, Lord of Truth).

Next month I will take Tiyo’s life story from the time when his studies at Lovedale are disturbed by the War of The Axe (fifth Frontier War); interrogate why his mother, Nosuthu, took refuge with him on the missionary, and why they decided it best that he leaves for Scotland to continue his studies — and preserve his life. And I’ll look at how in 1846, like the prophet Samuel’s mother, she dedicated her son to God as she watched her 15-year-old being uprooted from his native environment to be thrust on strange land across the waters.

She said: “My son is the property of God; wherever he goes, God goes with him…”

Mphutumi Ntabeni’s new book The Broken River Tent on 19th-century Xhosa Chief Maqoma will be published in May by Black Bird Books, a subsidiary of Jacana Publishing.