New Cardinal from Laos is Known for Kindness 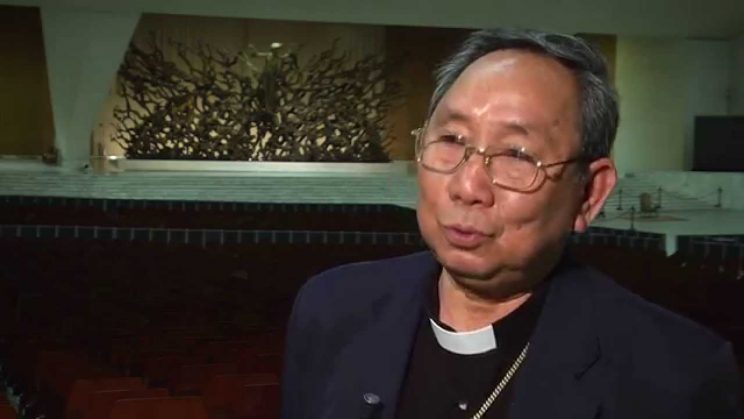 Cardinal-designate Louis-Marie Ling Mangkhanekhoun, who will become the first cardinal from Laos, is an ethnic Khmu, a hill tribe from northern Laos and southern China.

When St. John Paul II named Cardinal-designate Ling as apostolic vicar of Pakse, Laos, in 2000, the cardinal-designate told ucanews.com, “I never dreamed that this appointment was possible.”  Pope Francis named his to the College of Cardinals; he will be elevated in a consistory at the Vatican June 28.

In a country with only about 45,000 Catholics, Cardinal-designate Ling has a method of seminarian education based on lay catechists, reported ucanews.com.

He explained his system to the Rome-based AsiaNews in 2015: “The positive thing is that we have married catechists who are true missionaries, who go to live in the villages and become the ‘roots’ of evangelisation. They go, live, they begin to build bonds …”

“We offer this experience to the seminarians. Seminary students must study three years, then they must stop for at least a year, up to three years, to mature in their decision, but also for pastoral experience as catechists, carrying medicines, aid, prayers for the people of the mountain. They integrate with the villagers, live as the villagers do in everything.

“We now have eight major seminarians. They are very dedicated to the people, to the families. Through this sharing, we make our most important contribution, that is the faith,” he said.

Catholics in Laos told ucanews.com that Cardinal-designate Ling is diligent and kind to the local community.

He has taken a keen interest in environmental issues, opposing the rapid deforestation by well-connected companies that pushed villagers from their land and created a spiral of social problems. Damming in Laos had threatened ecosystems, while rampant corruption was speeding the degradation.

“Now we are starting to destroy ourselves,” Bishop Ling told ucanews.com in a 2015 interview. “It’s not from climate change itself but (it is) coming from human beings, and humans doing something very wrong to destroy the earth.”

Cardinal-designate Ling was born April 18, 1944, in northern Laos and was ordained a priest in 1972.

An apostolic vicariate is a church jurisdiction established in mission regions where the hierarchy is not yet fully organized. Pakse is one of four vicariates in Laos, which has no dioceses.