Places Where Mary Has Appeared 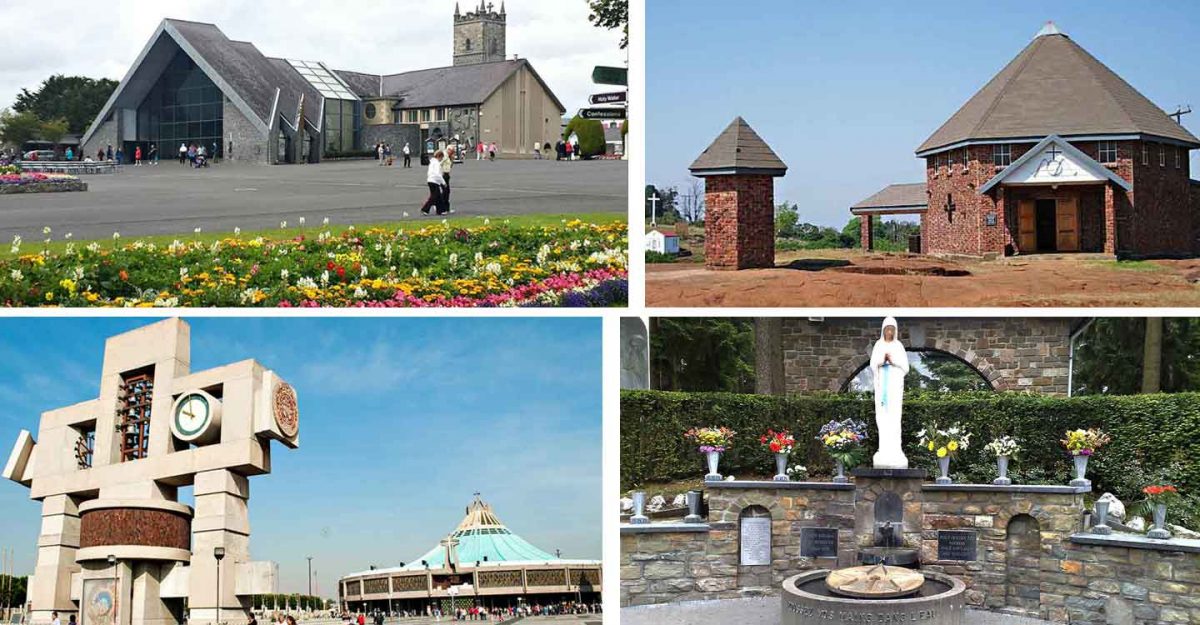 As the Church celebrates the centenary of the apparitions of Our Lady in Fatima, FR RALPH DE HAHN looks at other approved visions of Mary.

The visitations of the Blessed Virgin Mary to earth are beyond counting. These apparitions stretch from the Wild West to the oriental East, with practically every country claiming this heavenly favour. However, only a few are approved by the Holy See.

There are also reported apparitions to Muslim and Jewish communities. What they all emphatically state is that the Mother of Jesus the Redeemer is also the mother of all the redeemed. She is a caring mother, profoundly involved in the lives of her wayward children.

She appears at a time when the world is straying from the Eternal Truth, her own son — the Son of God.

She comes with a message, often a warning, or to console and encourage as only a mother can.

The three major shrines of France testify to her appearances in the 19th century to combat the powerful forces of rampant rationalism, materialism and secularism when the spiritual side of man — intellect and will — was being ignored.

In the so-called “Enlightenment” era, when the supernatural was seen as a joke and science and human reason as having all the answers, Mary appears as a mother to give her children new hope and the promise of victory.

We must not forget that the evils of that century provided the fertile soil for the disastrous 20th century. Totalitarianism and two world wars accounted for more deaths than all previous wars put together!

Seeing that man was making such a mess of his beautiful creation, the Heavenly Father sent his son and his predestined daughter to earth; and Jesus, in turn, sent his mother, hoping that having disobeyed and rejected him, we might yet listen to the plea of a caring mother.

She brings back the light into our darkness, reminding us of our former dignity, and that we are loved by the Father. She declares the power of his Truth, for truth is nothing less than God himself, and reveals that there is no conflict between reason and faith.

The human intellect seeks the truth, a truth which is not the projection of our experience (subjectivism ) — but we are to conform our lives to that objective truth revealed in Christ.

While only nine of the major Marian apparitions are approved by the Vatican, many others are still under the Holy See’s scrupulous investigation.

Approved by the Vatican

In the latter, Mary appeared four times to a humble Native Indian, Juan Diego, on the Tepeyac Hill.

She sent him to the local bishop with a batch of very rare flowers bundled in his tilma, a shawl-like garment. When he opened it before the bishop, it revealed the perfect image of the Lady who appeared on Tepeyac Hill.

That tilma, with the perfect, unblemished image of the Virgin of 1531, is still on view to the many thousands of pilgrims who visit the Guadalupe shrine today.

Here, Mary expressed her motherhood over all God’s children and her caring concern for the unborn. She is now the universal protector of the unborn and the patron of all pro-life bodies.

When the Muslim Turks were looking to conquer Western Europe in 1571, it was prayerful recourse to her in the decisive battle of Lepanto that saved Christian Europe from the powerful Muslim invasion. It was at that historical hour when all Christian Europe answered the cry of Pope Pius V and prayed the rosary non-stop through day and night.

When Paris was hit by epidemics in 1830, Mary appeared three times to Sr Catherine Labouré in the chapel of the Daughters of Charity of St Vincent de Paul, at the Rue du Bac in Paris.

It was here that she showed the design of the now famous Miraculous Medal, which declares her the Immaculate Conception.

It was by that title that she introduced herself to Bernadette Soubirous, a sickly girl of 14, at a grotto named Massabielle near the southern French hamlet of Lourdes in 1858. Bernadette experienced a total of 18 apparitions, despite the cruel persecution of the local authorities.

Here Mary clearly declared that she is the Immaculate Conception, confirming a dogma promulgated four years earlier. Here Mary pleaded for prayer and penance for the conversion of hard sinners.

This shrine is now world famous for its countless miracles of body, but also of heart. The miraculous spring still flows, bringing healing to millions.

High on the mountains of La Salette in south-eastern France, Mary appeared to two children, Maximin Giraud, 11, and Mélanie Calvat, 14, in September 1846, while they were caring for their animals.

Mary appealed for the observance of the Sabbath, and for the conversion of the millions who had turned away from God. She pleaded for an end to blasphemy and for true repentance.

This visit of Mary as “the beautiful lady” brought a wonderful revival to this area.

In January 1871, as the Franco-Prussian war was threatening the area of Pontmain, in north-western France, Mary appeared in the sky for about three hours as the “Lady of Hope” to a group of young children who described a “lady wearing a star-studded blue dress”.

At Pontmain she emphasised the love of Jesus and his concern for the people, and encouraged the children to pray.

The region was spared invasion by the victorious Prussians.

At Knock, a small village in Ireland’s County Mayo, 15 villagers between the ages of 5 and 75 saw a silent apparition which lasted about three hours outside the gable end of the local church in August 1879.

It was raining in the region that day, but not over the area of the apparition.

It was a silent apparition; no words were spoken. All the witnesses testified to seeing three figures in the apparition:  Mary, Joseph and St John the Apostle, as well as a lamb on the altar with a host of angels present.

In 1932 Pope Pius Xl declared Our Lady of Knock “Queen of Heaven and of Ireland”.

It was the winter of 1932-33 in Belgium, in the village of Beauraing, when Mary appeared as a very young lady of maybe 18-20 on 33 occasions to a group of five children in a convent garden near a hawthorn tree.

She declared herself as “Mother of God and Queen of Heaven” and, displaying the rosary, she again made the appeal for the conversion of sinners.

The children spoke of Mary as the Virgin with the golden heart.

Mary appeared again in Belgium in January 1933 in the small village of Banneux to Mariette Beco, 11, just outside her family home. Her family was not practising the faith.

Here Mary made eight appearances. She declared herself to be the “Virgin of the Poor”, promising to intercede for the poor, the sick and the suffering.

And, of course, in 1917, exactly 100 years ago between May and October, Mary appeared at Fatima to the three Portuguese children: Lucia, 10, and her two cousins, Francisco, 9, and Jacinta, 7.

Here she described herself as the “Lady of the Rosary” and was deeply concerned about the waywardness of man and revealed the cry of her Immaculate Heart.

She made an urgent plea for prayer, especially the rosary, and promised that her Immaculate Heart would ultimately triumph — but the world would have to listen to her Son or there would be “the annihilation of many nations”.

She foretold the end of the First World War in 1918, but also warned of a more terrible world war.

She asked for penance, conversions and trust in her motherly love, and then asked all the bishops, as one with the Holy Father, to consecrate Russia to her Immaculate Heart.

It was here on October 13, 1917 that between 70000 and 100000 people witnessed the miracle of the falling sun at Fatima, to which local and foreign newspapers of that period give written testimony.

There are many hundreds of recorded appearances and miracles, far too many to mention here. Here in South Africa we have the reported ten apparitions between 1955 and 1971 to Benedictine Sister Reinolda May at Ngome in Eshowe diocese.

At Ngome, Our Lady said she wished to be venerated as “the Tabernacle of the Most High”. This has been accepted as worthy of veneration by the local bishop.

Another famous shrine of Our Lady is in Rwanda where she appeared between 1981-83 in Kibeho. In various messages to various schoolchildren — only three of whom have been recognised by the local bishop as authentic visionaries — she warned of violence and hatred, presumably predicting the Rwandan genocide of 1994 which killed half a million people.

One of the three approved visionaries, Marie Claire Mukangango, was murdered in the genocide.

The local bishop approved the apparitions as authentic.

The alleged apparitions of the Blessed Virgin at Medjugorje in Bosnia-Herzegovina to six young people, beginning in 1981, are still not approved, neither by the local bishops nor by the Vatican. Medjugorje still draws huge crowds of pilgrims every year.

The few apparitions already approved by Rome effectively confirm that Our Blessed Lady did in fact make her appearances at that particular spot because we know that any official statement demands years of thorough researching and questioning — with the aid of the various sciences.

What is meaningful to us is that Mary is our Mother, and still cares so deeply for all her wayward children.

Bishop: ‘Mary is not Appearing in Medjugorje’

The commission that now-retired Pope Benedict XVI established to study the alleged apparitions of Mary at Medjugorje, Bosnia-Herzegovina, reportedly voted...