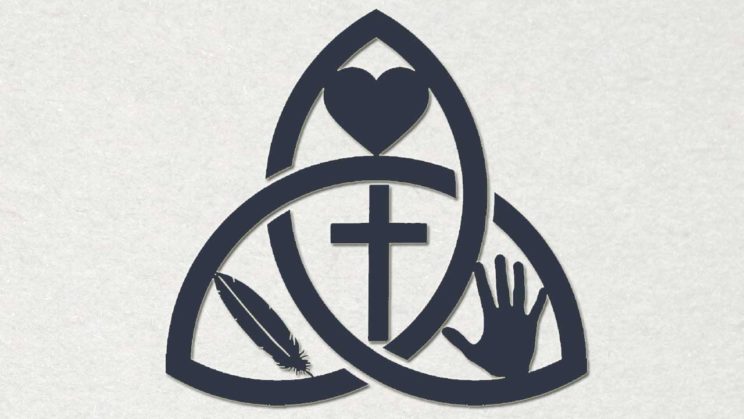 By Fr Allan Moss OMI – The sacred liturgy on Trinity Sunday proclaims: How great is your name, O Lord our God, through all the earth! (Ps 8:2). In the Old Testament, God’s sacred name is revealed as Yahweh, meaning I Am. Jews, out of reverence, will not pronounce it, saying haShem (the Name) or Adonai (Lord).

Ultimately, the divine nature of God, as the Trinity, is love. Israel always spoke of God’s hesed ve’emeth, his steadfast love and faithfulness. It connects with the meaning of his name, I AM  always here, and for you. The full revelation of God is seen in Jesus, the Risen Lord, standing in our midst, Emmanuel, God with us always. As Son of God, he reveals the Trinity.

Here are some words used for the Trinity, in Greek, Latin and Hebrew, the early languages of the Church: Hagia Triada (Trias), Beata Trinitas and Hashilush Haqadosh.

The doctrine of the Trinity was not created at the Church councils; they merely articulated the mystery of faith believed since apostolic times. They used the language and culture of the day, which was Greek, hence the philosophical approach. They tried explaining the Trinity as divine persons having the same essence (homoousia); and the nature of these persons (hypostasis); and how they relate to one another (perichoresis).

Such new terminologies in the Church warranted further explanations and more councils to clarify and re-define. That is the background to the Nicene Creed with its jawbreakers, such as consubstantial, compared to the more simple, ancient form of the Apostles’ Creed.

I once heard a priest preach on the Blessed Trinity. Play C,  he told the musician. After that he called for E, then G. We heard each note singly. Then he asked the three notes be played together. The triad was a beautiful harmony, a C Major chord. He explained the chord to be like the Trinity, each note in the triad like each Person in the Trinity.

We are looking at a mystery beyond human comprehension, a tremendous love, who loves us into existence and destines us to share in the depths of his own life. Jesus’ prayer is Father, that they may be one, even as you and I are one (Jn 17:22). Full life in the Trinity is the Spirit empowering us in Christ, who shows us the way to the Father, and the Father pouring out his Spirit upon us, full of love for his children.

I think of my little friend Angelina being upset because her father came late to pick her up after school. He patiently listened to her complaints. He apologised and made it clear how much his beloved daughter meant to him. He explained that he will always be there for her. She ended up drawing closer and snuggled up against him as he took her home.

Angelina should have no problem later in understanding God as a Father who cares, Jesus Christ who shares, and the Holy Spirit who dares us to come closer to a God who loves us.