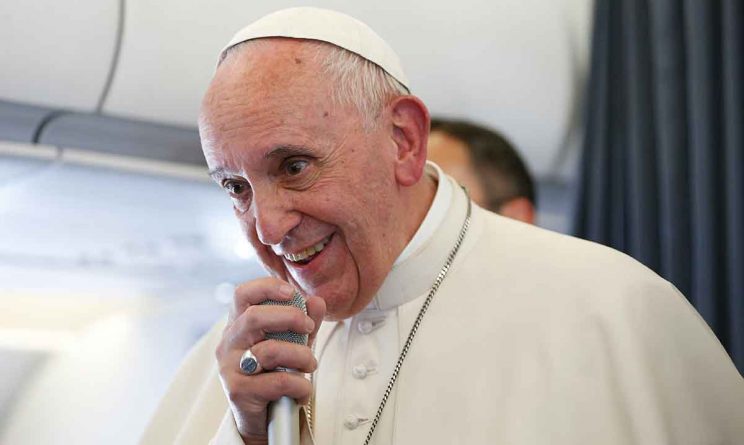 Pope Francis speaks with journalists aboard his flight from Portugal to Rome May 13 where he expressed doubts about the on-going apparitions at medjugorje. (CNS photo/Paul Haring)

Lucy Ruben, Pretoria – It was with dismay that we read the pope’s comments on the apparition and messages of Our Lady of Medjugorje (May 24), and to not even visit this small village on his trip to Croatia in 2015 seems an unreasonable snub.

Only peace and spiritual enrichment have come from Our Lady’s messages there.

Considering that Medjugorje is right in the middle of a potential war zone — 25km from Mostar where 170 Bosnian orphans were held hostage in the 1990s, 300km from Sarajevo, the city in which the assassination of Duke Franz Ferdinand sparked World War I, and 50km from Srebrenica, where 8000 Muslim men and boys were massacred in 1995 — it would seem that Our Lady chose the right place to bring her messages of peace.

Even sceptics from The Guardian newspaper in London went there on pilgrimage two years ago. One said the peace was so palpable that you could hardly talk.

Do we need the sun to fall from the sky as in Fatima to recognise the presence of God?

Pope to Volunteers: Guard against Doubt and Fatigue by Being with Christ
Share