Focus on life, not death

Pope Francis encouraged the priests of the Congregation of the Resurrection to model their ministry and their basic attitude on that of Mary Magdalene, the Easter morning “apostle to the apostles.” 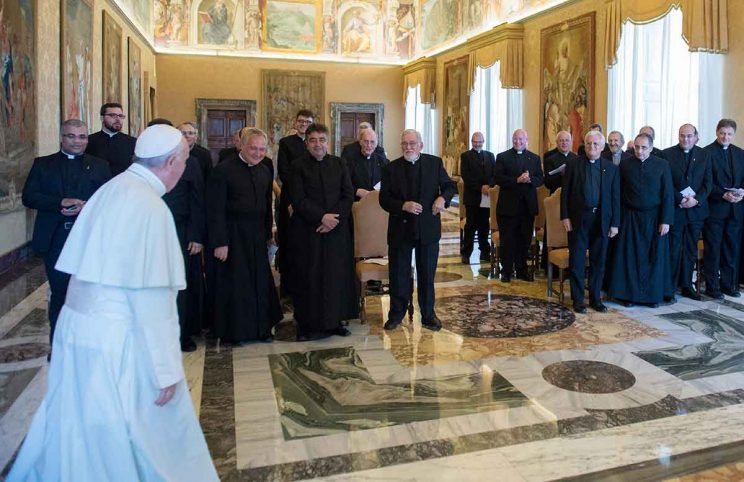 Pope Francis arrives for a meeting with priests of the Congregation of the Resurrection at the Vatican. (CNS photo/L’Osservatore Romano)

“Mary Magdalene and the other women who went to the tomb that morning were women ‘on the move’: They abandoned their ‘nest’ and set out; they took a risk,” Pope Francis said, meeting with members of the Resurrectionists’ general congregation.

“The Spirit is calling you too, brothers of the Resurrection, to be men who set out, to be an institute ‘on the move’ toward every human periphery, wherever the light of the Gospel needs to be brought,” the pope told them. “The Spirit is calling you to be seekers of the face of God wherever it is to be found: not in the tombs — ‘Why do you look for the living among the dead?’ – but where it lives in the community and in mission.”

Order founded on the resurrection

The order, Pope Francis said, was founded “to testify that the resurrection of Jesus Christ is at the basis of the Christian life” and to witness to the presence of the risen Lord in the church and the world today.

READ  Pope: Present in the Eucharist, Jesus Transforms those who Receive Him

“In this regard, I would propose to you as an icon Mary Magdalene,” the pope told the priests. After the crucifixion, she had gone to Jesus’ tomb, but found he had risen. “This is the joyful good news she brought to others: Christ is alive and he has the power to conquer death and bestow eternal life.”

Christians are called to focus on the power of the risen Lord and his presence even in places and situations that at first glance seem dark and devoid of life, Pope Francis said.

“Nostalgia for a past that was rich in vocations and impressive achievements must not prevent you from seeing the life that the Lord is causing to blossom today, too, in your midst,” he told them.

“Do not yield to nostalgia, but be men who, moved by faith in the God of history and of life, proclaim the coming of the dawn amid the darkness of the night.” By Cindy Wooden Catholic News Service