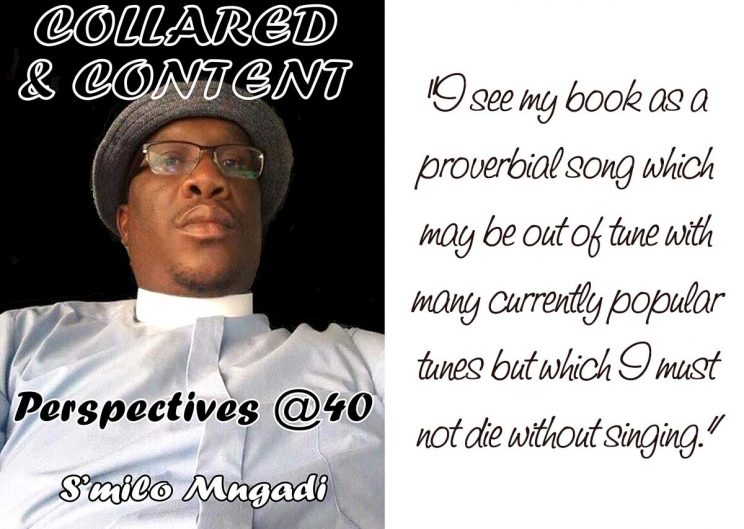 In this new book, Collared & Content, Perspectives @ 40, Father S’milo Mngadi shares his views from his 40 years on earth and 15 years as a priest, ranging from family to society; politics to people; theology to religion, sexuality to identity and much more.

Fr Mngadi says his book is not an autobiography nor is it a memoir, though it has elements of both. He described it as a collection of viewpoints arising from his life-experience. It follows his life-story from birth up until his present role as pastor of St Albert’s parish in Vosloorus, Johannesburg archdiocese.

“The elements of a memoir are that it’s selective; not mentioning every detail,” he said, joking that “a man must keep some cards up his sleeve”.

“However, these autographical and memoir traits were a springboard for the reason of the book being from my perspective. By perspective, I basically mean how I view things. Obviously, how we view things can be quite fluid,” he said.

Fr Mngadi admitted that his views are not absolute and noted the possibility that on some subjects he might be missing the point altogether.

He said he sees his book as a proverbial song which may be out of tune with many currently popular tunes but which he must not die without singing.

“Most probably, by the time you read this book, my ‘perspectives’ on certain matters dealt with in it would have changed. It is a risk that I understood and consciously took,” Fr Mngadi said.

Fr Paul Manci SCP, rector of St John Vianney Seminary in Pretoria, “a man of wisdom and great intellect”, told Fr Mngadi: “Maybe we are afraid to write because in future our ideas will change, but books with our names will continue to represent what we no longer hold and we will thus be embarrassed by the products of our pens.”

READ  Shepherds on the Green: A Relaxing Day off for Priests

Fr Mngadi dedicates his book to God for “I am because She is”, as well as to his late parents, Max and Sis Thoko, who accepted him as a tender from God, and his late spiritual fathers, Fr James Dlamini — his parish priest for 36 years — and Bishop Paul Themba Mngoma, who ordained him.

Fr Mngadi was born in Mariannhill diocese in KwaZulu-Natal. After finishing school, he trained for the Catholic priesthood and was ordained in 2002 at the age of 25.

He has served in his home diocese and in Gauteng as a pastor in various parishes. A former social communications officer of the Southern African Catholic Bishops’ Conference, he presents a regular show on Radio Veritas.