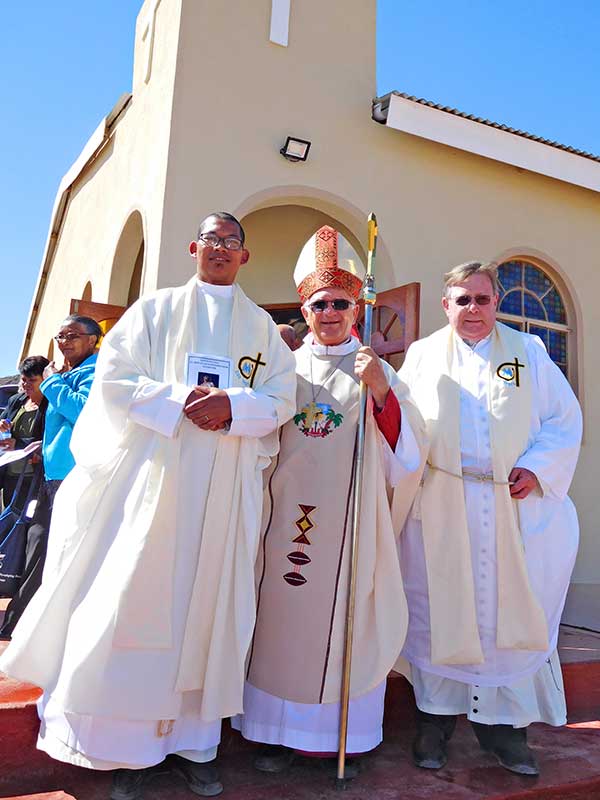 Three Oblates of Mary Immaculate at the entrance to the new church of St Sebastian in Nourivier, Northern Cape: (From left) Fr Sebastian Rossouw, Bishop Edward Risi of Keimoes-Upington and Oblate provincial Fr Ronald Cairns. The church replaces an older prefab building from the 1980s. Nourivier parishioners themselves made the cement blocks the new church is constructed from.

Nourivier, a small hamlet tucked away in the hills of the Kamiesberge, about 40 minutes from Kamieskroon in the Northern Cape, celebrated the blessing and opening of its new church.

The new St Sebastian church, which can seat 150 people comfortably, replaces an older prefab building which the late Fr Alois Eckerstorfer OSFS erected for the community in the 1980s.

Parishioners and Benefactors Made the Church Possible

Parishioners of Nourivier made the cement blocks with which the church was built. Benefactors throughout the country donated windows, the granite altar, and the lectern.

Contractor  Zihaadt Cloete and his workers from Springbok donated their time and expertise. Much support was received from Catholics in Springbok.

Fr Rossouw asked his many friends and parishes in Johannesburg, and in particular his home parish of Eldorado Park, for help.

The church was completed within a year.

Strong Ties With The Methodist Community

It is situated in the heart of the Methodist mission territory. Catholics settled there in the 1950s. The two churches have always enjoyed good relations, with Catholics at times gathering in the Methodist church, and their children to this day attending the Methodist school in the area.

The small church was packed to capacity and beyond, with a tent outside for the occasion.

At the entrance to the church a sign quotes Psalm 127, which was cited when the first sod was turned at the blessing of the foundation: “Unless the Lord builds the house, in vain do its builders labour.”

For a young Durban Catholic a large tattoo of a crucifix is a public declaration of his faith which was...