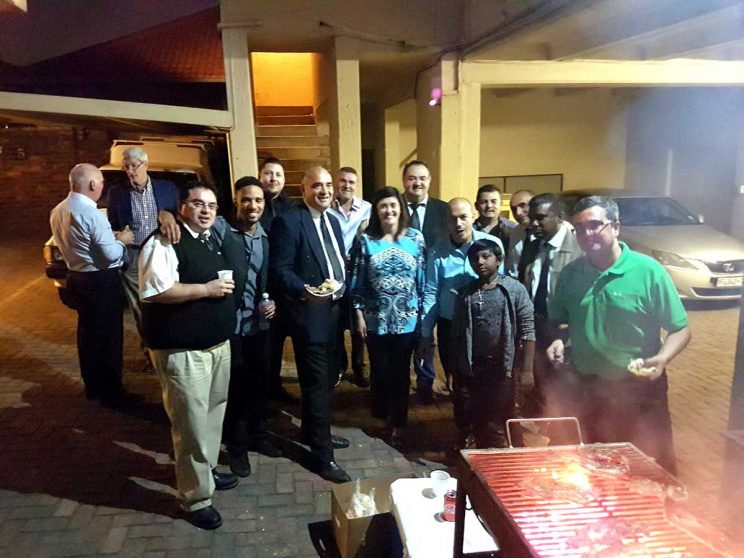 The new weekly Men in Christ Show on Radio Veritas was launched with a braai outside the radio station’s Edenvale studio.

Radio Veritas’s newly launched show “Men in Christ — The Essence of the Christian Man” has been on the air for a month, and what a ride it’s been.

The weekly show, billed as “a show for men by men” got off to a busy start with a studio full of proud and suited-up Men in Christ members, who celebrated with a launch braai at the studio, arranged by Manny Baeta and Radio Veritas director Fr Emil Blaser OP.

The Topics of Men in Christ

Albert and Tony de Nobrega were the first guests on the show, speaking about Men in Christ and their rosary group, and Herbert Smith and Joey du Preez also joined them in the studio to share their testimonies.

The show was well received, with many positive comments sent in.

The Men in Christ team has since hosted many male guests — and also a first woman guest, Leeza Menezes.

Among the topics the programme has examined are spiritual authority and the role of a man in terms of being a husband and father.

The show’s presenters will continue to explore the journey of their roles of men and will have some young men coming in to share what they look forward to as future fathers and husbands.

An All Saints and Advent Shows

The Church calendar at this time also allows for some themed shows such as specific saints, All Souls and preparation for Advent.

“As a team, we are extremely blessed to have been given this avenue to minister to men of our communities,” said Carlos Camara, a member of the team.

“Radio Veritas has been so accommodating and its team has trained us really well, giving us free licence to put our show together, with their final approval.”

The Men in Christ Show airs on Radio Veritas every Wednesday at 19:00 on 576AM (in Gauteng), DStv audio channel 870 or streamed on www.radioveritas.co.za