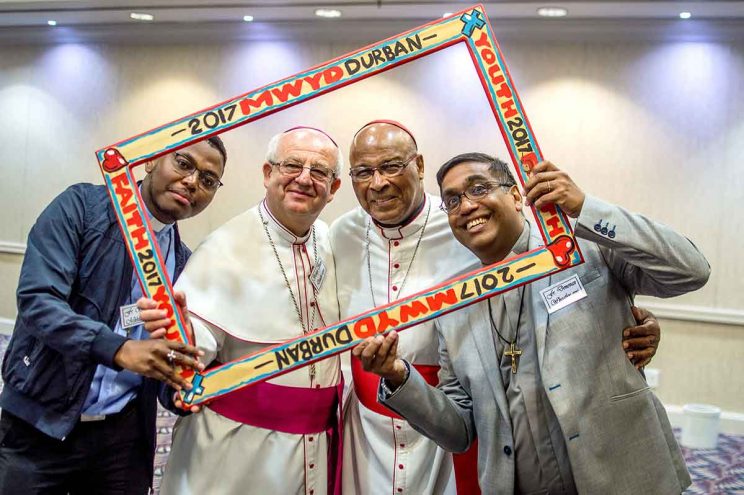 By Illa Thompson – The archdiocese of Durban facilitated a legacy breakfast for 70 chosen stakeholders, people of influence and businesspeople to create awareness about two major projects undertaken by the Church in KwaZulu-Natal: the Mini World Youth Day and the Napier Centre 4 Healing.

Cardinal Wilfrid Napier outlined his expectations for the projects, reminding guests that plans are well underway for MWYD, to be held in Durban from December 6-10.

At the breakfast, hosted and sponsored by Tsongo Sun Hotel Marine Parade, they also learned about the new aftercare facility for post-rehab narcotics addiction patients, the Napier Centre 4 Healing, which will open in Ekukhanyeni mission, near Verulam on the KZN North Coast.

The cardinal has prioritised the establishment of a recovery centre for narcotics addicts who have completed the formal rehab process.

Initially the centre will be able to accommodate 14 adult men. Further phases will allow their facilities to be extended to cater for women.

The Napier Centre 4 Healing follows in the footsteps of the successful interfaith facility, the Denis Hurley Centre in the heart of Durban, which works with the city’s destitute and marginalised.

Cardinal Napier shared two anecdotes which led to his commitment to support these two projects and his focus on special ministry to youth and young adults.

Cardinal Shares Stories that Moved Him to Action

The first was his experiences of youth and young adults at every World Youth Day going back to Cologne, Germany, in 2005.

A young woman from Zimbabwe told him: “I have always been proud and happy to be a Catholic. Unfortunately, it is a sentiment not many young Catholics seemed to share with me. Since coming to WYD in Cologne I’ve discovered that I’m not alone. Here are thousands of Catholic youth and young adults who are just as happy and proud as I am to be Catholic.”

READ  The Mystery of the Eucharist – Our Source of Life

The second was what he had heard a young man say as he appealed for help during the cardinal’s visit to the Denis Hurley Centre outreach clinic at the old Dalton Hostel Beer Hall.

The appeal was simple and from the heart: “Please, Sir, I would like to go to rehab. Whoonga has ruined my life. I’ve dropped out of school, I’ve been kicked out of my family home for stealing, I’ve impoverished my family to feed my drug habit, and now I’m living on the streets. I want to turn my life around.”

Cardinal Napier told the guests: “These two factors are behind your being invited to share this breakfast this morning. MWYD and NC4H are two sides of the same coin — they express in the most graphic way possible, the thinking behind the choice of Pope Francis’ theme for the next Synod of Bishops: Faith, Youth and Vocation Discernment.”

Speakers Nina Freysen Pretorius of the Conference Company and Pearl Ramotsamai spoke in detail about the MWYD and the NC4H respectively, to give attendees a better understanding of both projects.

For more information on either project, contact Barbara Koorbanally at Durban archdiocese on 031 303 1417.