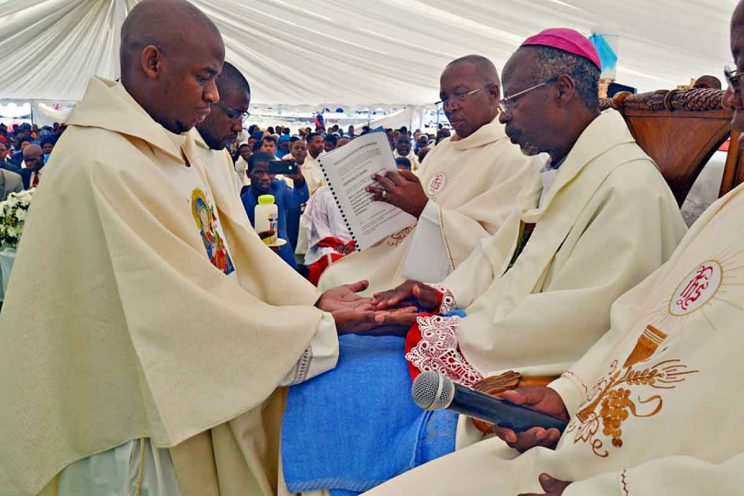 Bishop Frank Nubuasah of Francistown anointed the hands of Fr Tshiamo Makaba during his ordination to the priesthood in Gaborone.

By Sr Phatsimo V Ramokgwebana SC – Bishop Frank Nubuasah SVD of Francistown, Botswana, presided over the first ordination to the priesthood for Gaborone diocese as its apostolic administrator.

Fr Tshiamo Logic “Rock” Makaba was ordained at Thapelong parish in Kanye, the first Catholic priest to be ordained in the area.

Born into a non-Catholic family, he began his Christian journey in 1988 after his baptism at St Theresa’s Catholic mission in Lobatse. Fr Makaba attended confirmation classes at Thapelong parish and was an altar server.

He shared his teenage desire to become a priest with the late Fr Cathal Butter CP of Lapa la Lorato parish. “Fr Butter encouraged me to keep on praying about my vocation, but soon returned to his home country of Ireland,” he said.

“Nevertheless, God’s love never left me alone. Within no time, Fr Morena Koetlisi OMI played a great part in my life through his encouragement, and helped me to join the minor seminary in Kgale.”

After completing his senior studies in 2006, he did his spiritual year and concluded his orientation programme in Botswana in 2007. The same year, he was sent to St Augustine Major Seminary in Bulawayo, Zimbabwe, but returned home after two months.

The following year he started a diploma in information technology at Botho University in Botswana, where he graduated in IT. In 2010 he still felt a serious desire to become a priest and returned to his seminary studies, completing his formation.

‘Ordination to the priesthood is not child’s play’

Starting his homily, Bishop Nubuasah told the congregation in Setswana: “Peo ya moprista ga se matshamekwane” (Ordination to the priesthood is not child’s play).

The bishop confirmed with the candidate, when brought forward by his parents during the ceremony, that he wished to go ahead with ordination, and his parents said Tshiamo had freely made his choice. Bishop Nubuasah, in his homily, told Fr Makaba he had been called by God, and soon would become a priest, a dignified vocation and also a response of humility to God.

‘Whatever we do is for the glory of God’

The bishop said from now on Fr Makaba would become different, his hands would be applied with the oil of chrism and begin to bless in the name of Jesus. This anointing would set him apart, and make him a priest for eternity. Turning to the congregation, Bishop Nubuasah appealed to them to keep Fr Makaba in their prayers and never cease to support him in his vocation, for he brings to them abundant graces and blessings from God as his heritage is only God.

Fr Makaba himself said: “I am here today as living testimony of what God can do for us, and whatever we do is for the greater glory of God.”