The Christmas edition of The Southern Cross in 1942 was a slim affair at ten pages, but there was a lot to read. GÜNTHER SIMMERMACHER steps into a time-capsule from 75 years ago.

These days, the Christmas issue of The Southern Cross is bright and colourful, with a wide variety of articles which, we hope, help to enrich the celebration of the great feast of the Nativity. But 75 years ago the Christmas issue, dated December 16, was a slim ten pages, due to paper shortages caused by the Second World War which at that point had more or less reached its halfway point.

There are only three photos in the newspaper: two on the front-page (of the Holy Family and Bethlehem in Palestine), and one of a fallen soldier on the back-page. The cover price was a princely 3 pence — a “tickey”. 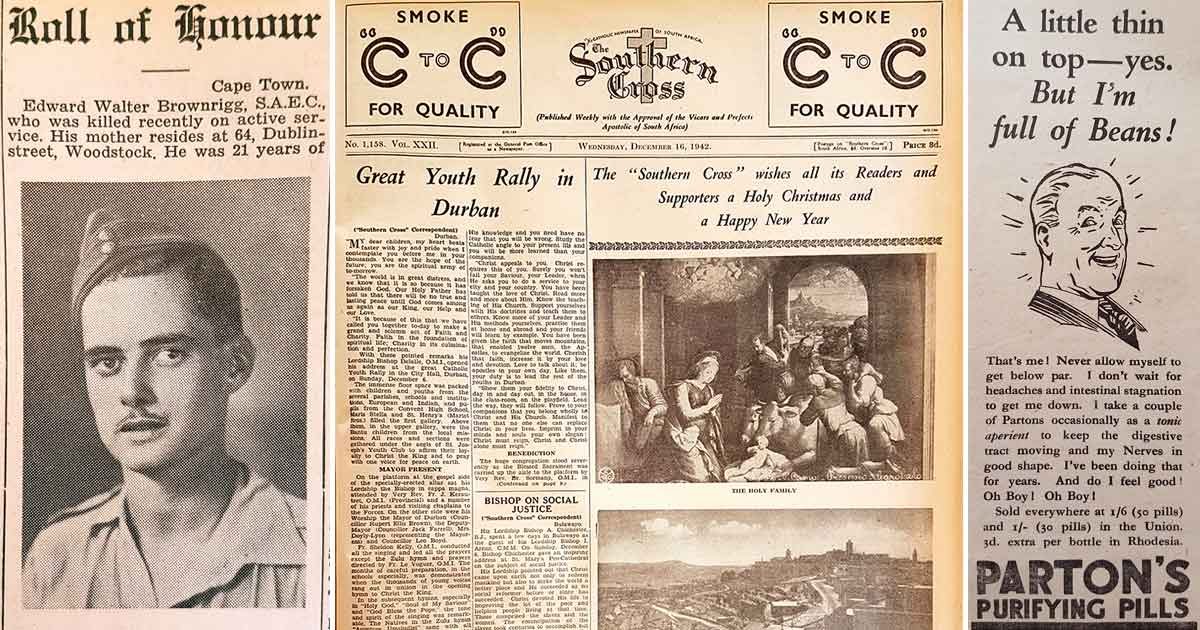 (Left) A sad feature during the war was the Roll of Honour for South African Catholics killed in action. Among them was 21-year-old Edward Brownrigg of Woodstock, Cape Town, an alumnus of St Joseph’s College in Rondebosch. (Centre) The front-page of The Southern Cross of December 16, 1942, reports on a youth rally in Durban and features images of the Nativity and the town of Bethlehem in Palestine. (Right) One of the adverts in the issue!

In the front-page lead, Durban held a youth rally in the City Hall. All race groups were represented though it seems that the seating was not uniformly desegregated. Whites, coloureds and Indians occupied most of the lower tier and  Africans the upper tier, with pockets of racially mixed groups.

The rally was addressed by Durban’s Bishop Henri Delalle OMI, who entered wearing a cappa magna, the purple cape with a metres-long train.

The Blessed Sacrament was carried up to the makeshift altar by Fr Sormany OMI, one of the two priests who first came up with the idea for The Southern Cross almost a quarter of a century earlier. Also present was Durban’s mayor Rupert Ellis Brown (who I think was a Catholic).

Bishop Aston Chichester SJ of Salisbury (now Harare) spoke in Bulawayo’s cathedral on social justice, saying that “the world to-day has gone astray because it has thrown Christ overboard and it will be a better place only when Christ is restored to his rightful place”.

The “Editor’s Notebook”, written by editor Fr Owen McCann (the future archbishop and cardinal), takes issue with a new ordinance in the Cape Peninsula which  prohibits anyone from supplying others with alcohol after 10pm. Fr McCann warns that this could mean that a priest cannot celebrate Midnight Mass this Christmas because “the altar server will be ‘supplying’ the priest with ‘liquor’ after 10pm”.

In her “Home Circle”, long-serving columnist Mary Singleton empathises with women whose husbands are away serving in the war. She notes that for many people who “through the evils of war” have returned to the faith, this Christmas “will have a special significance” because “this year they will be experiencing for the first time in many years the joy that comes from a heart at rest and a conscience that is untroubled”.

Aunt Celia from Estcourt in her “Children’s Corner” thanks those who took part in her drawing competition, won by Carol Parkin of Lydenburg.

In part 225 of his “Theology for the Layman”, Fr Gavan Duffy SJ looks at the sacrifice of the Mass.

An “Afrikaans Katolieke Woordeskat” segment takes us from the word Fasting (vas) to Hours (getye, ure)

A sad pair of regular features on the back-page: the “Roll Of Honour” lists South African Catholics who have fallen in the war, and next to it there is a list of South African POWs. This week’s fallen servicemen are Captain H Miles of Yeoville, Johannesburg, who had also fought in the Great War from 1914-18, and 21-year-old Edward Brownbrigg of Woodstock, Cape Town.

Father McCann’s editorial, titled naturally enough “Peace on Earth”, deals with the war, attributing it to a rejection of Christ. Even though the war is not decided yet, he is looking forward to an Allied victory and sets out priorities already. The Allies, he counsels, will have to serve the common good, recognising that “the peoples who are now their enemy must also take their part and place in the after-war world”.

There is only one letter this week, from Fr G Jansen OP. In it, he recounts the heroism and loyalty of African (“Native”) and coloured soldiers in the war, saying that they should “share” fully in South Africa when they return.

“I shrink from thinking that they will have to go back again to the same miserable existence which we allowed them to live in the Union before the war,” writes the priest, a chaplain who signs off as “Capt. the Rev. G Jansen OP”.

There is no supplement, but a few items deal with Christmas, besides Mary Singleton’s column.

Fr Kenneth Green in what is likely a syndicated article. writes about “Bethlehem Yesterday and To-day”, describing in some detail the liturgical celebrations in the town of Jesus’ birth.

There are also two short stories that refer to Christmas, “The Admiral” by Wilkinson Sherren, and “A Cup of Water” by Edith Mary Power.

Cape Town’s magistrates might be perturbed by the number of ads for alcohol. There is Castle beer, suggesting that you need to stock up for blackouts, while the Lion lager ad shows a father telling his young-adult son: “A little of what you fancy does you good” (which is not always good advice).

Elsewhere, there are ads for Santy’s Brandy from Stellenbosch, as well as for Jack Dolyle’s Bottle Store in Benoni and The Palm Wine & Spirit Shop in Cape Town’s Long Street (the latter lasted for nearly another 50 years; it’s now a bar).

The earpieces on the front-page were for the C to C cigarette brand, the initials standing for Cape to Cairo, which was supplied to troops in North Africa (hence the name). Soldiers nicknamed the brand “Camel to Consumer” because of the long time it took to come from South Africa.

For some reason, there were lots of bread ads in this issue: OFS in Kimberley, Lowther’s in Durban, Whyte’s and T&F Connolly in Johannesburg, Attwell’s and Barlings in Cape Town, Sunray in Stellenbosch, Pocket’s in Salisbury, and Osborn’s in Bulawayo.