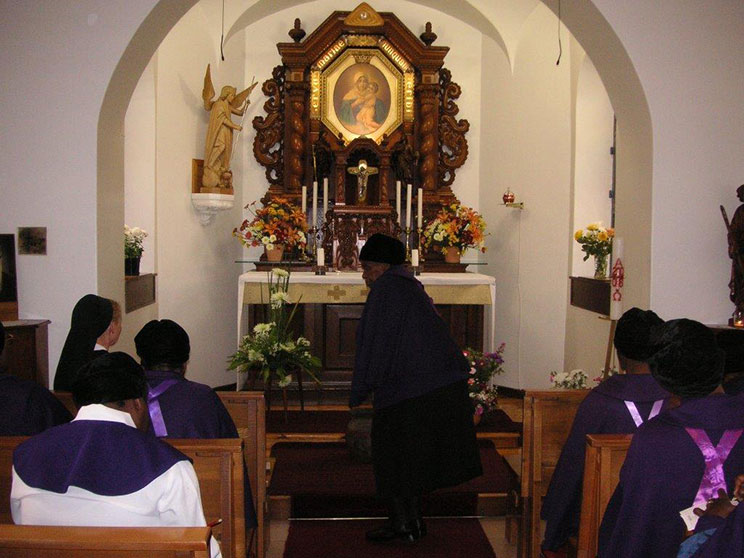 The Schoenstatt shrine in Bedfordview, Johannesburg, was robbed of its tabernacle, ciborium, chalice and consecrated hosts.

The Schoenstatt Sisters in Bedfordview, Johannesburg, are still recovering after becoming the latest religious building in the area to fall victim to crime — which included the theft of consecrated hosts.

Thieves broke into the Aurum Patris shrine and stole the entire tabernacle with the consecrated hosts, the ciborium and chalice, and broke two statues of St Peter and St Paul. The woodwork at the back of the altar was damaged.

The criminals had accessed the shrine by removing the glass panel of a side window close to the altar.

Sr Marian Dunn, who discovered the break-in, said the Sisters were saddened, and disappointed that people would break into a place of worship and do such damage.

Items like chalices and tabernacles are of value to thieves, as they are broken up and sold to scrap- metal yards for money.

Police warned that they have noticed an increase in burglaries of religious buildings in the area.

Sr Marian said the Schoenstatt Movement would upgrade its security by fitting stronger burglar bars and adding additional beams to the tabernacle area.

Dedicated in 1975, the Aurum Patris shrine was built by Schoenstatt members. They came together every Saturday for a year to lay the bricks and plaster the walls, and also contributed financially. More importantly, there were many spiritual sacrifices offered, so the shrine could become a place of grace for many.

They felt it fitting that the only such shrine in Gauteng — the economic powerhouse of the country and home to the goldmines that gave it its claim to fame — should also carry the name Aurum Patris, which means “Gold of the Father”.

Its name comes from a comment by Schoenstatt founder Fr Joseph Kentenich when he visited South Africa in 1948.

Upon seeing the goldmines that lined the Johannesburg landscape, he looked at the fledgling Schoenstatt community and said: “These are my goldmines.”