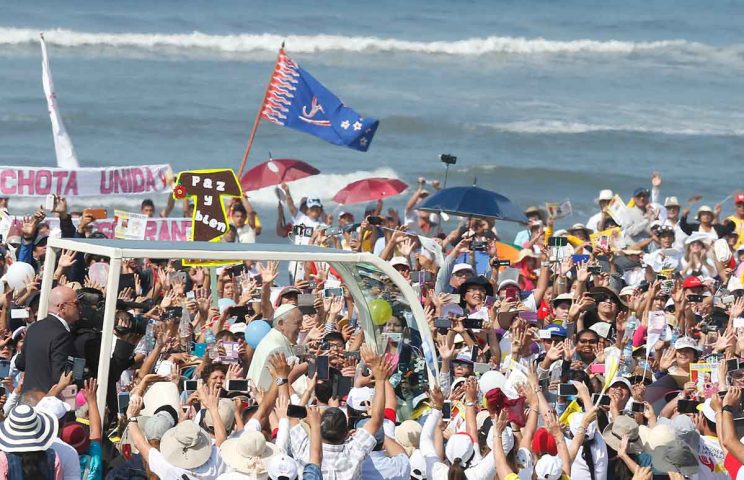 Encouraging the people of one of Peru’s most battered cities, Pope Francis said the Gospel message can give Christians strength and hope to navigate amid life’s storms.

Celebrating Mass in the northern coastal city of Trujillo, Pope Francis said he knew the tragic consequences the people have suffered because of an unusual weather pattern that meteorologists dubbed a “coastal El Nino.”

“Like the apostles, you know the power of nature, you have experienced its force,” the pope said in his homily at the Mass on Huanchaco beach. “Just as the apostles faced the storm on the sea, you had to face the brunt of the coastal El Nino, whose painful consequences are still present in so many families, especially those who are not yet able to rebuild their homes.”

In early 2017, Trujillo suffered torrential rains that triggered a series of landslides from the Andean foothills to the east, sending water and mud cascading into the city.

The areas most affected were poor neighbourhoods, especially Buenos Aires, the neighbourhood the pope was to tour in his popemobile after the Mass.

The Peruvian regions of Piura, Lambayeque and La Libertad, whose capital is Trujillo, were all hit. At least 100 people died, more than 140,000 lost their homes and nearly 1 million suffered property damage. Total damage estimates range from $3 billion to more than $6 billion.

However, Pope Francis said he also was aware of the “other storms” that “can hit these coasts with devastating effects on the lives of the children of these lands” and test the spirit of Trujillo’s citizens.

“Among these are organised violence, like ‘contract killings,’ and the insecurity that they breed. Or the lack of educational and employment opportunities, especially among young people, which prevents them from building a future with dignity. Or the lack of secure housing for so many families forced to live in highly unstable areas without safe access,” the pope said.

According to local government statistics, Trujillo is the second most violent city in Peru after Lima, with 2,435 people murdered in 2016 due to gang-related contract killings.

The city has seen an increasing rate of organised crime, with extortion being a common practice in the construction and transportation industries. Peru is one of the world’s top cocaine producers and Trujillo, like other port cities, it suffers from drug-related crime because much of the cocaine is shipped out by sea.

The organised crime gangs have hired minors as assassins because they assume the youngsters will get lighter sentences if caught – and because they are considered expendable.

Yet the pope assured the people that Jesus “knows our pain and our trials” and wants to “be close to us in every painful situation to give us a hand and help lift us up.”

“These times of being ‘buffeted’ call into question and challenge our strength of spirit and our deepest convictions,” he said. “They make us realise how important it is to stand united, not alone, and to be filled with that unity which is a fruit of the Holy Spirit.”

Pope Francis encouraged the people of Trujillo to remain close to Jesus and rely on the Holy Spirit, “who keeps us united so that we can support one another and take a stand against whatever would take away all that is best in our families.”

“Fill your lives always with the Gospel,” the pope said. “With Jesus, the soul of this town of Trujillo can continue to be called ‘the city of eternal spring,’ because with him, everything is an opportunity for hope.” By Junno Arocho Esteves Catholic News Service