Why Hagia Sophia Must Matter To Us 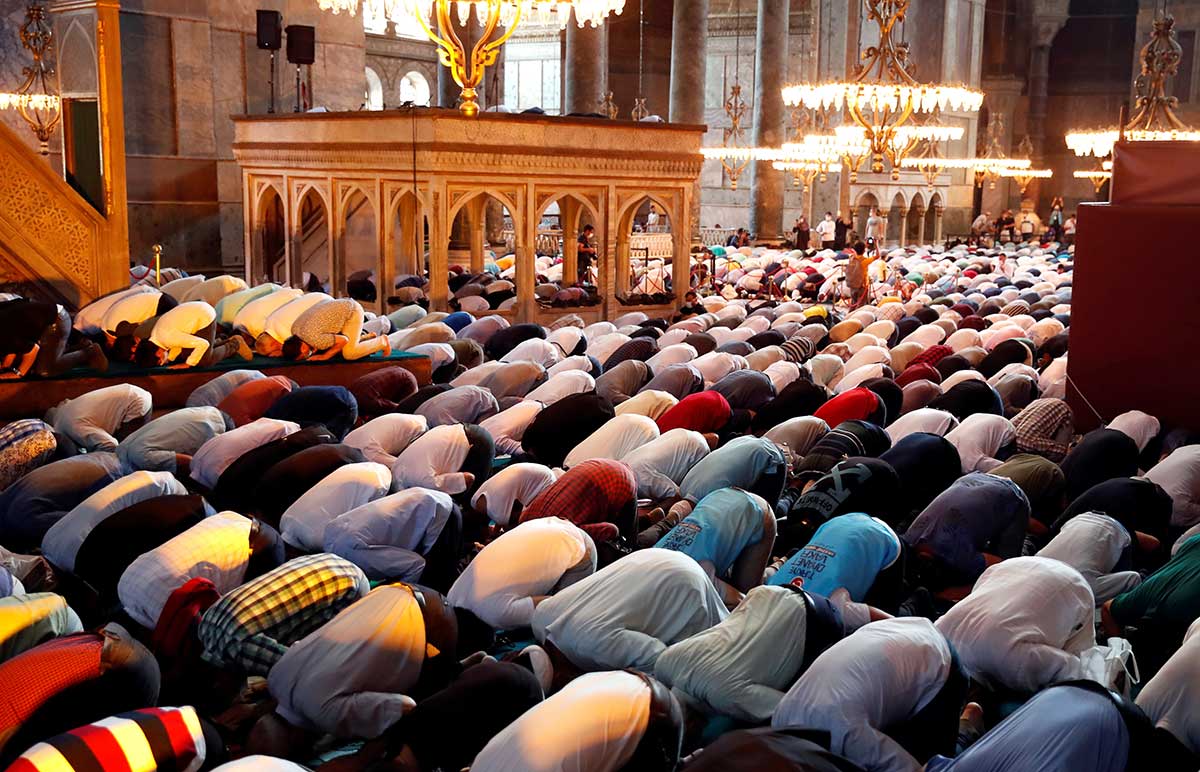 Worshippers attend Friday prayers at Hagia Sophia Grand Mosque in Istanbul July 24, 2020. Hagia Sophia was built as an Orthodox Christian cathedral and stood as the seat of Eastern Christianity for a thousand years before Ottoman Turks conquered its host city and turned it into a mosque in 1453. In 1934, it was designated as a museum revered as a symbol of Christian and Muslim unity until being transformed into a mosque this July. (CNS photo/Umit Bektas, Reuters)

The reconversion to a mosque of the church once regarded as the greatest in Christendom represents an assault on Christianity, argues Fr Valentine Iheanacho.

Hagia Sophia, pronounced “Aya Sophia”, is an ancient, indelible and majestic edifice in the present-day Turkish city of Istanbul.

It used to be the mother of all churches in the Byzantine tradition, with historical significance for ancient Christianity. Famed for its massive dome, Hagia Sophia has been classed as the “eighth wonder of the ancient world” and one of the great achievements in the history of architecture.

Hagia Sophia was built with extraordinary speed within a period of five years after Emperor Justinian (527-67) commissioned a new church to be built in the place of an old one which had been destroyed.

At its dedication on December 27, 537, Justinian exclaimed at the grandeur and beauty of the new church: “O Solomon, I have surpassed you!”

Hagia Sophia is much more than an architectural masterpiece. Its place and significance cannot be dissociated from the religious and political worldviews of the Byzantine world.

As the mother of all churches, the Byzantines saw Hagia Sophia,  with its religious harmony, as a reflection of heaven on earth. In the words of Patriarch Germanos of Constantinople (715-30): “The  church is an earthly heaven in which the super-celestial God dwells and walks about.”

In that empire interlaced as a Christian society, the emperor had his palace. The ecumenical patriarch who occupied Hagia Sophia did so almost like a caretaker on behalf of the emperor, who in his own turn, was considered God’s emissary on earth.

With the assistance of the patriarch, the emperor ruled his Christian subjects in a Christian empire.

This was artistically illustrated in the iconic mosaic of Christ Pantocrator in Hagia Sophia, the depiction of Jesus as the ruler of the universe.

According to Archbishop Rino Fisichella, although it was covered by the Muslims when Constantinople fell into the hands of Seljuk Turks in 1453, Christ Pantocrator can never be completely erased or destroyed.

Hagia Sophia will always carry the face of Christ, because it was built by a great Christian emperor and not by a Muslim caliph.

Hagia Sophia, together with the face of the Pantocrator embossed on it, is symbolic and reflective of the chequered history of humanity of which Christ stands as its cross road.

Constantinople, dubbed the “Queen of Cities”, and Hagia Sophia, its symbol par excellence, have historically been coveted by the Muslim Turks. They stopped at nothing after their initial invasion of Anatolia following the Battle of Manzikert in 1071, and the city of Constantine remained the object of their focus.

Mehmet II used it as a prize to motivate his soldiers in their last battle against the war-wearied Byzantines.

Constantinople was the envy of the Seljuk Turks until they finally captured and ransacked it in 1453.

Similarly, Hagia Sophia in our time has been the envy of Turkey’s ruling Justice and Development Party (AKP) of President Recep Tayyip Erdogan.

This is discernible in the words the populist and Islamic fundamentalist Mr Erdogan uttered in 1997 when he was the mayor of Istanbul: “The mosques are our barracks, the domes our helmets, the minarets our bayonets, and the believers our soldiers.”

Until its consolidation of power, the Erdogan regime shrewdly operated with caution. It adopted the rulebook of gradualism, as drawn up by the German-educated engineer Necmettin Erbakan, Mr Erdogan’s political mentor.

He reputedly advised Mr Erdogan and his party to unveil their Islamic agenda in a piecemeal manner, waiting until the opportune moment, and using democracy not as “an end but as a means”.

The initial period of self-restraint, and the pretence of embracing membership in the European Union, were meant to help the AKP consolidate power and gain international acceptance.

Once that was accomplished, Mr Erdogan from 2010 began weakening the once-powerful military and neutralised the constitutional court—two institutions that had protected Turkey as a secular state.

This was followed by the steady process of uniting two powers in President Erdogan: political and religious.

He is already the de facto supreme leader of Turkey. The recent reconversion of Hagia Sophia into a mosque serves to cement his aspiration to be the spiritual leader of Turkey, too.

For Mr Erdogan and his fellow Islamists in the AKP, the golden age to recapture and recreate is the 16th century that marked the heyday of the Ottoman Empire, which first began with the capture of Constantinople in 1453.

Politics is the art of the possible. As Shadi Hamid has brilliantly shown in his book, Islamic Exceptionalism: How the Struggle over Islam is Reshaping the World, the leaders of the AKP are shrewd and patient politicians. Their politics of stages has been a very effective strategy.

The eventual reconversion of Hagia Sophia into a mosque has been an Islamic agenda of the AKP. It was only hidden from international view until the appropriate time.

In 2019, the Turkish government organised activities to mark the 567th anniversary of the conquest of the ancient Constantinople on Tuesday, May 29, 1453. In Byzantine history, that misfortune is known as “Black Tuesday”.

In a live televised national broadcast on March 29, 2019, President Erdogan assured his viewers: “Hagia Sophia will no longer be called a museum. Its status will change. It will become a mosque. Tourists who will come to visit mosques in Istanbul will visit Hagia Sophia not as a museum but as a mosque.”

This speech was made against the background of the 2019 local elections, to garner the votes of his religiously-inclined Turkish electorate, especially in the rural areas.

In 2020, the first Islamic call to prayer in Hagia Sophia—more than 80 years after it became a museum under Kemal Atatürk— brings to memory the mournful lamentations of the Byzantines on “Black Tuesday” over their captured city of Constantinople and Hagia Sophia:

“They have taken the City, they have taken it. They have also taken Hagia Sophia, the Great Monastery, that has many bells—each bell, a priest, each priest—a deacon. Quick, send a message to France, that they may send three ships: the first to take the Crucifix, the other to take the Gospel, the third and the most splendid, to take our Holy Altar for the Holy Communion.

“The Church groaned, the candles were put off, the icons began to cry, and to shed black tears.”

Though these words echo the conquest of the magnificent Hagia Sophia and the demise of the glorious Byzantine Christian empire, it is a clarion mandate to preserve Christianity—symbolised by the crucifix, the Gospel, and the altar.

Our faith is already under attack from radical Islam, even in Africa as far south as Mozambique, and by secularism in the West.

The sad and unfortunate fate of Hagia Sophia may be indicative of the ultimate grand plans of those who wish to obliterate Christianity from history.

This may not come to fruition only if Christians learn to work together to preserve that which is dear to them.

Fr Iheanacho is a member of the Department of Historical and Constructive Theology at the University of the Free State in Bloemfontein.