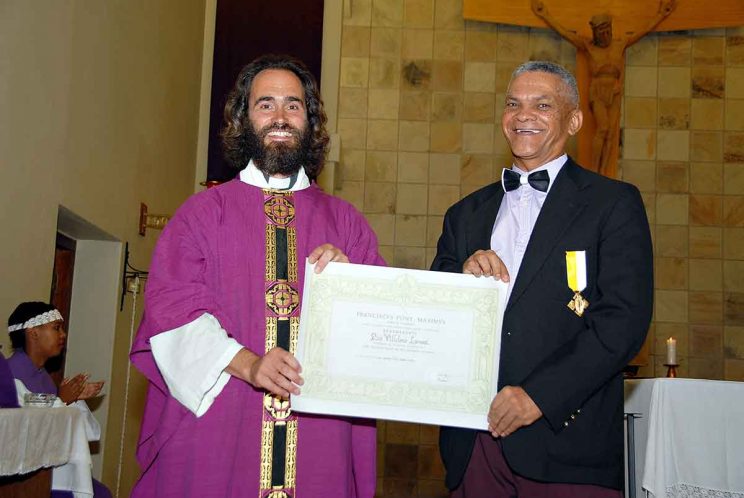 Willie Lamont, vice-chancellor of the Oudtshoorn diocese, is presented with the papal Bene Merenti medal by Fr Wim Sabo in St Nicholas church. Mr Lamont, who has worked in the chancery since 1977, was only the fourth-ever recipient of the papal medal in Oudtshoorn diocese

Pope Francis has honoured an Oudtshoorn layman for 40 years of service to his diocese with the papal Bene Merenti medal.

Willie Lamont, bookkeeper and vice-chancellor of the Oudtshoorn diocese, was presented with the papal medal in his parish church of St Nicholas by assistant parish priest Fr Wim Sabo.

Mr Lamont joined the chancery under Bishop Manfred Gottschalk in 1977. He was general assistant to the bishop’s secretary, Fr Karl Vogel SAC, who trained him in bookkeeping and office management. In 1994 Bishop Edward Adams appointed him diocesan vice-chancellor.

Mr Lamont witnessed the growth of the Church in the different parishes and towns of the diocese, saw priests and religious come and go, and attended every priestly and diaconate ordination in the diocese since 1977.

He was active in his own parish of St Nicholas where he served on the parish pastoral council for a number of years. He also worked on a diocesan and national level with the Chiro youth movement.

“In the old days, I knew the telephone numbers and postal addresses of all the churches and convents by heart,” Mr Lamont said.

The Bene Merenti is an honour awarded by the pope to Catholics for their service to the Church. It was originally a military medal first awarded at the end of the 1700s. Today, soldiers of the Swiss Guard, the pope’s army, receive it after completing a period of service.

“Through all these years Mr Lamont has remained dedicated and loyal, serving the local Church tirelessly,” said Bishop Frank de Gouveia of Oudtshoorn.

Mr Lamont is only the fourth person in Oudtshoorn diocese to receive the award, and the first this century.

Fr Leon Mostert, parish priest of St Nicholas, said it was the first time a pope had honoured the parish in this manner.

If the Shoe Fits…Get Funding and Donate It!

Dying Man: I Want to Come to the Light
Share