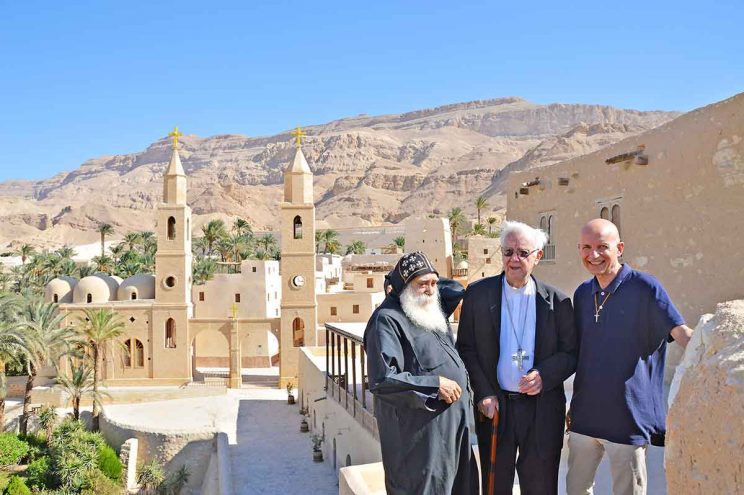 One way of helping to make peace is to encourage tourism to the Middle East, FR CHRISTOPHE BOYER M.Afr. found on a visit to Egypt.

Copts are what the Christians — Orthodox or Catholic — are called in Egypt, where they make up around 20% of the population. Their presence goes back right to the beginning of Christianity.

The Bishops of Southern Africa met in Pretoria with the head of the Coptic Church in South Africa Bishop Anthonio Markos of Johannesburg.

Bishop Markos started the Coptic Orthodox Church in Johannesburg in 1992 and soon after became friends with Archbishop George Daniel, then head of Pretoria archdiocese and the SACBC Department for Ecumenism & Interreligious Dialogue.

There are many struggling independent churches in South Africa but the Coptic Church is truly African since the beginning of the faith. There is much to learn from it.

The meeting in Pretoria takes on some significance in light of the two-week experience which Archbishop Daniel and I had when we visited our Coptic brothers and sisters in Egypt in October.

A Visit to Eygpt

Archbishop Daniel was invited by the Egyptian ambassador to attend an interfaith conference on the Sinai Peninsula to promote peace in that troubled region. As a member of the Department for Ecumenism & Interreligious Dialogue with some knowledge of Arabic, I was appointed to accompany the archbishop.

Arriving at our hotel in Cairo we met an Austrian professor, a German journalist, an Algerian journalist writing for a Russian publication, a priest and an imam from South Sudan, an imam from Mali, another imam from Pakistan residing in Ireland… We went directly to the Conference Palace.

Soldiers were surrounding the venue. They were meant especially for the protection of government officials; when those left, so did the troops.

It is a big conference centre. Participants might have been around 2000 people. Personalities started speaking only in Arabic. There was simultaneous translation on earphones — but the ones of the archbishop didn’t work. The theme was tourism and religion.

Because of increased terrorism there are fewer tourists in Egypt, so the industry needs promotion. Sinai is beautiful, with its mountains and the Red Sea. It offers climbing, diving and therapeutic facilities.

In a religious context, it’s the place of the burning bush and where the Ten Commandments were revealed to Moses. Statistics show that religious tourism to the region is more regular than other types, especially in the face of terrorism.

At the conference, Muslim scholars of Cairo’s famous Al-Azhar University sat next to leaders of churches — but no Jews — all in religious attire. An evangelical bishop spoke to praise the government for authorising the building of a church.

During tea time we spoke with a few clergy, especially the Coptic Catholic bishop and the local Coptic Catholic parish priest—an ex-Comboni student in Zambia — as well as with an evangelical bishop, the papal nuncio and his secretary.

After a magnificent lunch — which finished around 15:00, which is the normal time for that in the Middle East — we attended the inauguration of a beautiful mosque in the evening.

The Flight across Egypt

On Friday morning we took a flight to the ancient St Catherine’s monastery in the Sinai.

The military presence was heavy. The monastery was too small for the big crowd of the conference. It needs restoration: paintings are dark from smoke and grime, and many furnishings are worn out. We were told they are working on initiating restorations.

Established in AD 565 and officially called the Sacred Monastery of the God-Trodden Mount Sinai, it received the name St Catherine of Alexandria by Crusaders. A living thorn bush represents the burning bush. We stopped at the foot of the mountain thought to be where God gave Moses the Ten Commandments revelation but we had no time to climb it.

St Catherine’s is the world’s oldest continuously occupied monastery and library. The oldest manuscripts of the Bible are kept at the monastery, but in the crowd we lost track of the Texan monk who was ready to show us the library.

In the evening, with the illuminated mountains providing the backdrop, there was a beautiful UNESCO concert of mostly religious music, with singers from 15 countries, some Christians and others Muslims. It was on the theme of peace and love.

The official’s introductory speech seemed a bit too nationalistic and pompous, but that is understandable in the context of terrorism: Egypt is stronger than Islamism. Still, an English-speaking Bedouin spoke with us critically of the government.

Cairo and the Pyramids

We went on to experience many more great things. In Cairo we attended the holy liturgy at the Coptic parish church next to St Mark’s guest house, visited Old Cairo with the “Hanging” church and the church of the Holy Family (the Abu Serga), and had lunch in a convent of Coptic nuns

Of course we saw the pyramids and the Sphinx at Giza, and toured the national museum. We also visited the garbage collectors of the suburb of Zabbaleen on the slopes of the Mokattam mountain.

We went to the monasteries in the Eastern Desert of St Paul the Hermit and St Anthony, where we stayed overnight and were shown great hospitality by the monks.

At the patriarchal basilica in Alexandria, we venerated the casket containing the head of St Mark, and studied the stone slab giving the names carved in stone of St Mark and his successors as patriarchs, including St Athanasius.

On our way back we called at the St Bishoy and Syrian monasteries in the Western Desert.

On our last day in Cairo we visited the crypt of the new Coptic cathedral and venerated the tomb containing the remains of St Mark before we were granted a private audience with Coptic Pope Tawadros II.

In working for peace, I believe that the aim should always be reconciliation between different religions. Tourism to the Middle East, including and especially pilgrimages, can be a tool for that.