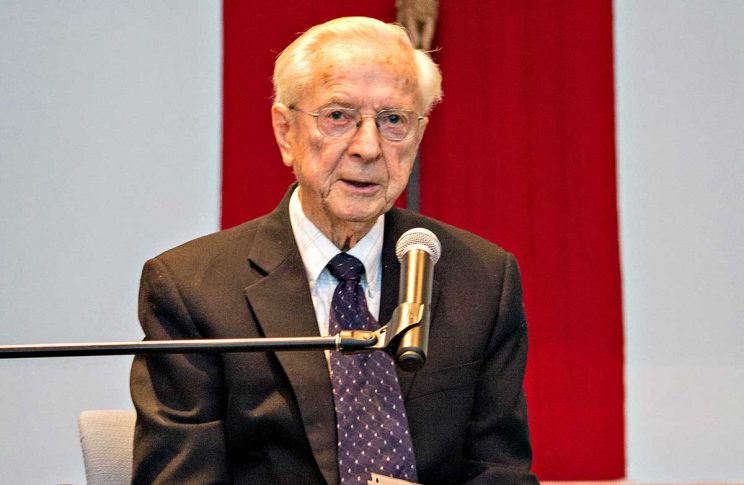 Bishop Remi De Roo speaks in Vancouver in 2016. The bishop is one of the few still-living Council Fathers of Vatican II. When Pope Francis heard that, he kissed the bishop’s ring. (Photo: Sarah Scali, St Mark’s College/CNS)

Canadian Bishop Remi De Roo is one of the last bishops alive to have attended all four sessions of Vatican II. Now 93 years old, he tells ALICIA VON STAMWITZ about his view of the Church in the era of Pope Francis.

In 1962, Fr Remi De Roo was the pastor of a parish in the Canadian city of Winnipeg, Manitoba. Then, early one morning while he was presiding at a weekday Mass, Pope John XXIII announced that he had selected the 38-year old priest to be the bishop of Victoria, British Columbia.

Six days later, Bishop De Roo was on his way to Rome to attend the first session of the Second Vatican Council.

Pope John XXIII called De Roo his “Benjamin”, because he was the youngest of the North American Council Fathers.

Today, Bishop De Roo, who retired in 1999 and will turn 94 on February 24, is one of the last surviving bishops to have attended all four sessions of the council, an experience that “radically altered” his outlook.

I Keep Telling the Story of Vatican II

For more than 50 years, he has lectured throughout the world, sharing his enthusiasm and insights on the vision of the council.

“I feel that I owe it to the people to keep telling the story of Vatican II,” he explained, “because its teachings impact everybody.”

I understand you met Pope Francis a few years ago?

Yes, I travelled to the Vatican for the canonisation of Popes John Paul II and John XXIII — who, of course, called the Second Vatican Council.

When I travel these days I use a wheelchair as a precaution because occasionally I have problems with my balance. A young priest wheeled me right next to the popemobile, so as the pope was approaching I called out to him in Italian, “Sono padre del concilio vaticano!” (I am a Vatican Council Father!).

Well, Pope Francis’ face lit up. He came over and said words to the effect of “What a wonderful experience you must have had!”

Then he took my hands and held on to both of them for the longest while, as he continued talking.

I don’t remember half of what he said because I was totally engrossed by his presence. But to my amazement, he bowed down and kissed the Vatican Council ring on my right hand. There aren’t many times in Catholic Church history that the pope has kissed a bishop’s ring.

That was a few months after the 2013 publication of The Joy of the Gospel (Evangelii Gaudium). What did you think of the pope’s first apostolic exhortation?

It is possibly the best updated summary of the meaning of Vatican II. In a sentence, it’s an invitation to begin a new chapter of evangelisation, and the invitation is for all of us.

That’s a point that Pope Francis has stressed many times. I hope that we are going to wake up to that message because after 50 years of lecturing on Vatican II, I’m still not persuaded that most Catholics have really heard the message.

The Message of Vatican II

Can you remind us of that message?

One of the main rediscoveries of Vatican II is the reclaiming of the ancient teaching that takes us right back to the beginning of the Church: the baptismal priesthood of the laity, which is the foundation of all the other gifts and charisms we receive in the Church.

We need to reverse the model that has put one supposedly elite group at the top of the pyramid and all the rest in descending roles, with ordinary people of faith down at the bottom. That pyramid is the exact opposite of the Gospel.

The Gospel says, and the council emphasised, that every single member of the Church is equal in dignity and in the capacity to serve.

It’s critical that every one of us, without exception, picks up the message of the council and of Pope Francis and achieves the joy of knowing the Gospel, living by the Gospel, and sharing the Gospel with others.

We sometimes forget that ultimately our faith is a way of life. We’re not in the world to capture converts or persuade people to believe exactly what we believe.

Yes, there are truths that are important; but don’t forget that the early Christians were known as “followers of the way”. It was the way they lived, much more than what they believed, that was critically important.

Faith is a Way of Life

How does Pope Francis communicate this — that faith is a way of life?

By reaching out to people on the margins, and by keeping his mind and his heart open. I love that time he said, “Who am I to judge?” Because if there’s one weakness in the Church today, it’s precisely that so many people are judging one another.

I think one of the reasons why this pope is so popular is [because] he’s showing everybody that he loves them all. He reaches out to the untouchables, and he’s showing in his daily life what the Gospel’s all about. So when he writes something or says something profound, we know it’s coming from lived experience, not just theory.

We’re not short of theory in our Church. We have many scholars and lay theologians, but they are not responsible for the Church.

We are all responsible, because we are the Church.

It sounds like Pope Francis has given you hope for the Church.

Yes, but there is a danger in that we’ll get into a new and refined form of paternalism in this era of Pope Francis because we’re proud we’ve got such a great pope. We think the pope is the Church, and that he can do it all. He’s not and he can’t.

So I hope we’ll take the pope’s words seriously and live them by accepting our own responsibility to move the Church forward. We can’t just applaud from the sidelines.

People Don’t Know Their Own History

Not everyone applauds Pope Francis, though. How do we address those who believe he’s taking the Church in the wrong direction?

Any good executive of any major corporation knows very well that you’ve got to work with your people, and you have to have their support if you want your dreams and ideals to be realised. The problem is that sometimes people don’t know their own history.

You often find that people who take narrow-minded stances are uninformed, or they are reacting out of a negative emotion, like fear.

What to do? Continue loving them, and don’t get into arguments.

Psychologists will tell you that you never get unity through the head; unity comes through the heart. Brains are made to sort and file, divide and make distinctions; so arguments get you nowhere. In fact, they may harden others, and you may lose your good relationships with them.

Instead, take time to bring yourself up to date on where the Church is, so that you have solid answers to people’s questions. Invite others to explain to you why they think the way they do, and try to explore with them the deeper, substantial teaching of the Church, and the work of the Spirit.

Investigated by the Curia

You were investigated by the Roman curia many years ago. Can you tell us about that?

In 1986, in Washington, DC, I made a declaration at a conference that I have repeated many times since. I said the question of the ministries of women is of such importance that it requires the communal spiritual discernment of the whole people of God, not just the hierarchy.

And I’m not limiting ministry to the priesthood or to ordination: that’s only one aspect. I mean ministries in the broader sense of the word — the variety of roles women can assume to help transform the patriarchal Church into a community of equal disciples.

After the conference, Cardinal Joseph Ratzinger [the future Pope Benedict XVI; then prefect of the Vatican’s doctrinal congregation] called me to Rome to explain my position. But the president of the Canadian Catholic Conference supported me and suggested the investigation be terminated.

Now, I see that Pope Francis has repeatedly said we need “a very serious study” of the roles of women, and I’m encouraged by that.

Take Another  Look at the Teachings of Vatican II

What do you hope will be the takeaway from this interview for our readers?

I would like to see more people take an objective, serene second look at the substantive and deep teachings of the Second Vatican Council.

I especially trust that we will all reclaim our baptismal priesthood. I invite all believers to explore and ponder the Council’s teachings about revelation, the fullness of which is found in the person of Jesus Christ—both the messenger and the message.

I hope they will recognise that other Christian Churches can also serve as instruments of grace: that all believers have seeds of the Divine planted in their hearts.

Finally, I hope Christians everywhere will reclaim the notion of sacramentality as applying to all of creation — something Pope Francis has taken up in his  encyclical Laudato Si’.

Modern science warns us that our planet is fragile and in grave danger because of our carelessness, our arrogance, and our aggressive exploitation. May we all heed the Church’s call to a deeper spiritual, cultural, and ecological conversion!

Pope To UN: Respect For Each Human Life Is Essential For Peace, Equality
Share