A Leader of Our Time 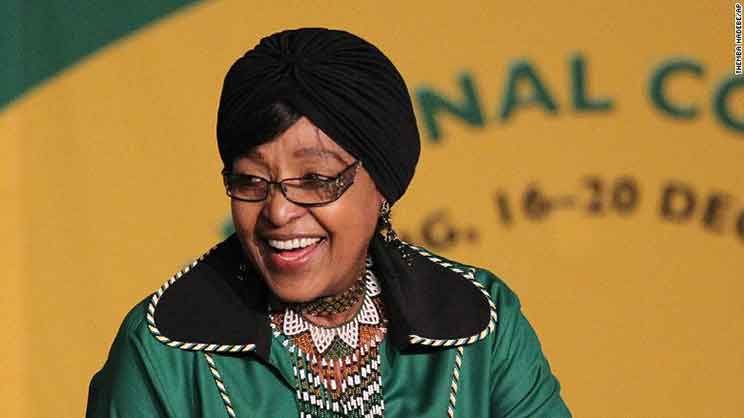 Winnie Madikizela-Mandela was a game-changer in the struggle against apartheid and patriarchy — and a devout Christian. COLLEEN CONSTABLE reflects on impact and faith of the beloved and controversial leader.

By her death, at age 81, this devoutly Christian woman leaves behind a legacy that is bigger than the liberation movement she served. She leaves behind a nation which now mourns and celebrates her legacy, overwhelmed by the depths of her achievements, stunned by the complexities of her legacy, and grasping with the controversy that seems to follow her even in death.

The country flags flew half-mast; her name will go down in the history as one of the great woman leaders of our time: a world leader in her own right.

Nomzamo Winifred Madikizela-Mandela gave a fresh perspective to the concept of leadership: she shaped the history for women in Africa and across the world. She broke the barriers that held women back: she ushered in a new meaning to women’s participation in politics, social justice, economics and human rights. She is an exceptional human being: an extraordinary woman — it is difficult to describe her or to box her into a particular role or category.

She smoothly integrated various roles into a singular approach that set the tone to challenge a system that undermined the dignity of black people; to challenge those who held authority and decision-making that re-inforced discrimination, white supremacy and inequality.

She challenged a system of apartheid and colonialism in a singular manner, while being part of a collective. She was dynamic: her charism, brilliance and natural elegance became part of the tools to dismantle the apartheid system. She challenged patriarchy and turned it on its head by virtue of her achievements.

The Amapondo King Ndamase Ndamase has lauded their Princess for the role she played in the fight against apartheid, emphasising that she raised destitute children subject to poverty by the apartheid system.

Mama Winnie hailed from the village of Bizana in the Eastern Cape. Her political sensitivities were shaped long before she married Nelson Mandela. At the age of 21 she became the first black social worker in the country, starting her career at Baragwanath Hospital. She married at age 23: a marriage that turned into a forced separation for 27 years.

During these years she emerged as a strong leader in the fight against apartheid. Not only did she keep the name of Nelson Mandela active at the time, she led from the front. She suffered many hardships and tortures in her quest for freedom of her country and its people. She showed courage and bravery: she was tough, fierce and defiant; strong-willed and uncompromising – she was fearless.

She was highly influential and inspirational: an intellectual who used her head and her heart. Her allies found in her compassion and humility and “saw the vulnerability in her eyes”. Her enemies found “heroic defiance” and fearlessness: nothing could hold her back: nothing could stop her – defiance became her theory of change. Not even a banning order could suppress her.

Her legacy is so rich in context, so amazing in concept that words to express the depth of her sacrifice to free the country remains misunderstood by some, even in her death. She faced complexity in her lifetime, with few coming to her defence. In her death her legacy and character is placed under scrutiny by those who alleges human rights violations.

Recently former police commissioner George Fivaz stepped forward on national television and reminded the nation that there has been no evidence that linked Mama Winnie to the death of youth anti-apartheid activist Stompie Seipei. She was never responsible for his death, neither did she give orders to kill him.

She is remembered for her great leadership as a woman, a black woman under oppression of apartheid and the effects of colonialism at a time when patriarchy, sexism and discrimination was a norm. She is remembered as an icon of the struggle against apartheid: her contribution has benefited women of all races and cultures — her achievements contributed to the ushering in of a new era in the history of South Africa.

She was straight-forward and never hesitated to speak her mind about the performance and failures of the government and ruling party. That too came at a cost. There was a time that she was shunned by the ruling party. In 1997 she was criticised for trying to stand against Jacob Zuma for the role of deputy president of the party. She later resigned from all structures of the party. She still remained her authentic self and in 2017 she said: “All that we fought for is not what is going on now. It is a tragedy that he lived and saw what was happening, we cannot pretend like South Africa is not in crisis, our country is in a crisis and anyone who cannot see it is just bluffing themselves.”

She died on Easter Monday. As a woman of faith, she celebrated the Eastertide at the Methodist Church in Meadowlands, Soweto. She was in touch with her spirituality and her God. She found her peace in her own way with her God.

In an online video her church remembers her as a very active and humble congregant, always helpful, with “generosity of spirit, expecting no special treatment.” She is known to have organised church services to pray against taxi violence and gender-based violence. She was a member of the ‘Womens uManyano’ of her church. Her pastor remembers her as someone who had a “deep spiritual relationship with the church and God: a God’s person.”

In an interview with Drum magazine in 2016, she said: “I am grateful for the route my life has taken. I believe God is the hand of fate in my life and He weaves the tapestry it is defined by, constantly adding the picture, ‘filling in the stitches’.

Akin to Judith in the OT

Mama Winnie reminds me of Judith in the Old Testament. Judith, a woman of great beauty, elegance and intelligence, a widow, led her people to triumph. Judith represents an “imperfect but legitimate leader of the Jewish People.” Judith devised a plan to save her country and people. Judith prayed to God for strength, courage and guidance before she took up her assignment. She was captured by the enemy, but she remained focused without despair: she knew her strategy and plan. She eventually succeeded to kill Holofernes, the general in chief of Nebuchadnezzars forces. Judith planned the destruction of her country’s enemy and succeeded. Judith liberated her people from oppression.

“God defends and liberates us through the actions of women and men who have their own strength and weaknesses”(African Bible, p715).

Rest in peace, Mama Winnie. Eternal rest grant upon your soul and may the perpetual light shine upon you!