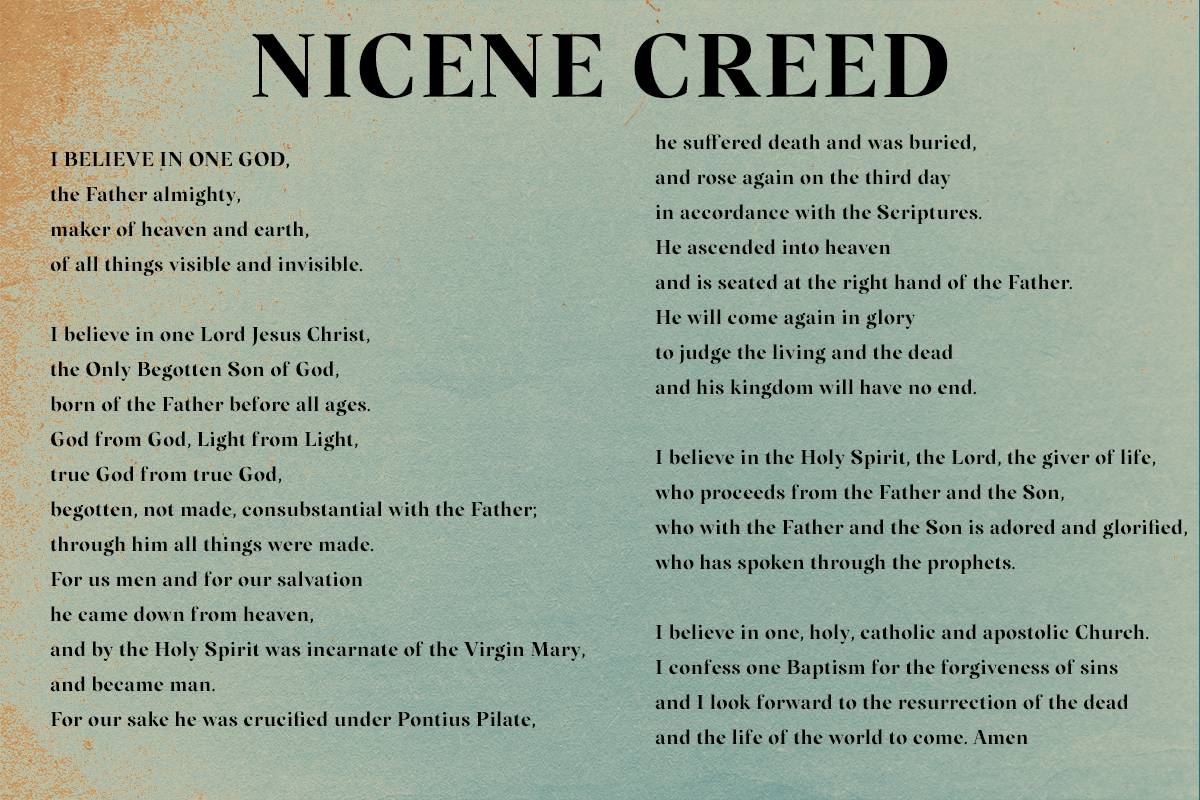 We recite the Creed every Sunday at Mass, but do we know its background and meanings? In a series of three articles, MICHAEL MAYER will look at the history of the Church’s statement of its beliefs and its relevance today

However, this does not mean pathetic compliance; it means boldness and respect. One can still raise an ardent challenge, to question those in Church authority, but how one does it, and what our motives are, and what forums we choose to present them in — these would arbitrate or judge for or against our obedience.

We are baptised into Christ’s offices of priest, prophet, and king, and as such have no less demands placed on us in our obedience to Holy Mother Church, to Christ, and to Christ’s designated authority the bishops (in which office the priests, and the deacons share in service to or under the bishop).

Pope Francis in 2016 classified obedience as faithfulness/fidelity and spoke of the opposition to obedience in terms of resistance that follows three types:

Of this Pope Francis says: “It is normal, and indeed healthy, to encounter difficulties, [to] reform” or change (challenging change in a healthy way),

– “Malicious resistance, which springs up in misguided minds and come to the fore when the devil inspires ill intentions (often cloaked in sheep’s clothing).

This kind of resistance, Pope Francis says, hides behind self-justification and accusation; behind tradition, “or make[s] everything personal, failing to distinguish between the act, the actor, and the action”.

Armed with this knowledge we now look at witness as an apostolic function of the laity.

The dignity and role of the baptised

Pope John Paul II said of the women at Calvary, as representatives of the laity: “In this most arduous test of faith and fidelity [they] proved stronger than the Apostles” (Mulieris Dignitatem, 1988).

In reward for faithfulness, he said, they are “the first to be called to announce [the Resurrection] to the Apostles”.

And in referring to “the special role of Mary Magdalene” (Jn 20:16-18), Pope John Paul called her “the apostle of the Apostles”.

This is typographically a lower-case “apostle”, but that does not diminish its meaning, for she bore witness to the Risen Christ before the Apostles”.

John Paul amplified this with the prophet Joel: “”I will pour out my spirit on all flesh; your sons and your daughters shall prophesy” (2:28).

It is within this dignity of the extraordinary role of the baptised that I would like to share some notes on the history of the Nicene Creed, which we recite at Sunday Mass every week.

A creed, simply defined, is a statement of belief. The Nicene Creed is named after the city of Nicaea, where a great ecumenical council of Church leaders from throughout the Christian Church gathered in 325 AD to define what we believe.

So the Creed we recite on Sundays was written almost 1700 years ago.

We know a little of the terrible suffering of the martyrs during the Roman persecutions, and we know that the Church faced innumerable heresies that she had to contend with.

But, after the crisis of Christ’s passion and crucifixion, the next greatest threat to Jesus’ plan for the world—one of the most shattering challenges for the Church— was Satan’s attempt to subvert the resurrected and glorified Christ to the pagan status of a son of Zeus, a Hercules, a wonder man—but not the eternal Son of God who pre-existed with God the Father.

But, as in every crisis, God had a solution.

As always though the Lord demands perseverance of his People, of his Church, as he has done since he first revealed himself to Abraham and to the Tribes of Israel — perseverance.

So Christian religious freedom came in 313 AD, after enduring almost two centuries of Roman oppression and at times horrific suffering. Just a few years earlier, there was a terrible persecution — the most severe of all persecutions — under Emperor Diocletian.

But the Resurrection provides immediate hope in the face of an almost unendurable trial that often seems never to end.

The Resurrection came just three days after the crucifixion — a sure and definite hope that Christ himself proclaimed from the Cross to the man executed beside him: “Today you will be with me in Paradise” (Lk 23:43).

This immediacy does not escape us even in our most immediate danger. Christ’s second coming too should not escape us as having all the immediacy of the Resurrection after the Crucifixion. Certainly the Lord saw it like this

“For the Son of man is to come with his angels in the glory of his Father, and then he will repay every man for what he has done.

“Truly, I say to you, there are some standing here who will not taste death before they see the Son of man coming in his kingdom” (Matthew 16:27-28).

And who are we to doubt? In Christ, we have nothing to lose and everything to gain.

It was this immediacy of hope that drove and sustained St Athanasius, the Egyptian from Alexandria, to endure intolerable challenges and near-endless suffering.

At the Council of Nicaea, it was with the help of Deacon Athanasius’ testimony, his arguments on and for the belief in Jesus as God, that turned the hearts and minds of the bishops from doubt and confusion to certainty, to conviction, of what was Truth, of what was orthodox.

And this was captured in the Nicene Creed, on which I will reflect over the next two weeks.

This series of article is adapted from a presentation given by Michael Mayer to youth leaders at Empower in Johannesburg.