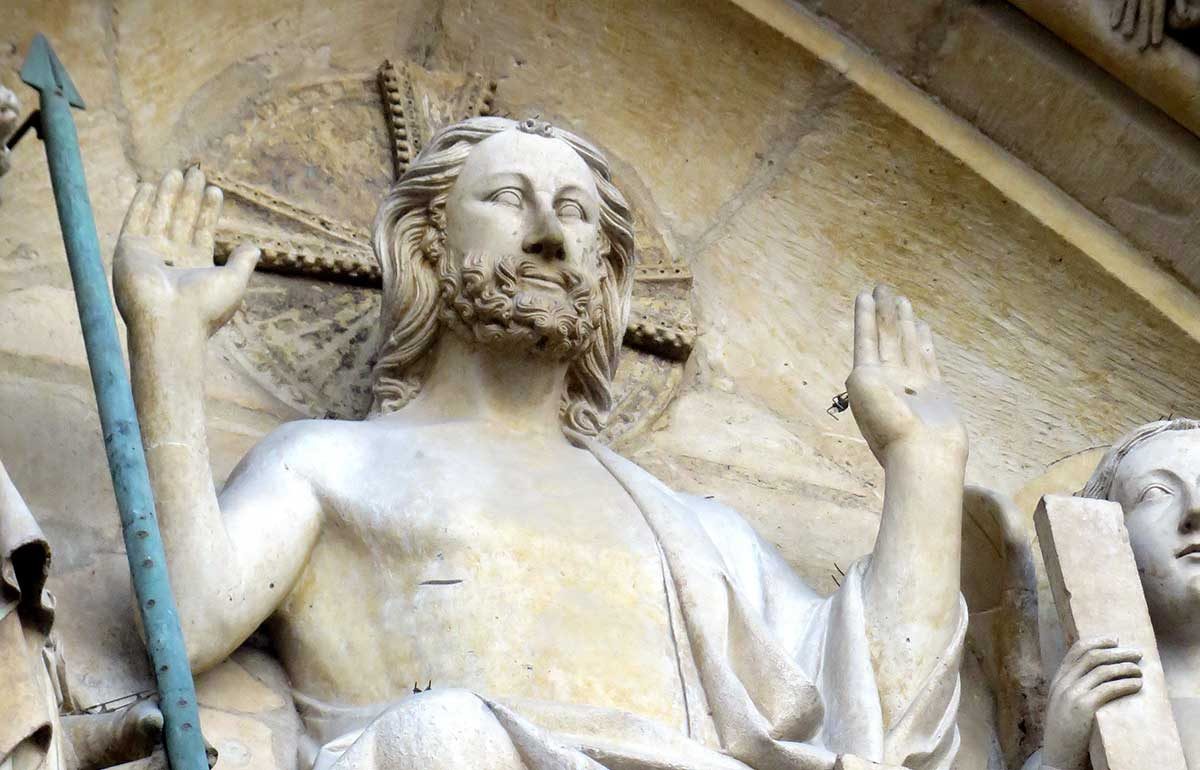 Jesus sits over the Last Judgment, on the facade of Notre Dame cathedral in Paris. In the 4th century, the Church was divided over whether Christ is divine or not.

We recite the Creed every Sunday at Mass, but we might not have known Christ as divine! In his second of three articles on the Nicene Creed, MICHAEL MAYER looks at how the Arian heresy almost won–and what that would have meant for Christianity.

The early Christian Church was beset with heresies. In the 2nd century there was the Gnostic heresy. In the early 3rd century a grave error known as Arianism emerged.

Arianism is named after a priest from Alexandria called Arius (c.256–336). Arius challenged the belief in the pre-existence in God of Jesus and claimed that Jesus was created by God. If he was right, then Jesus could not be divine. There’d be no Holy Trinity.

The theology of the Trinity is a complicated concept, but simply put, we speak of Jesus as Son eternally begotten, based on the Gospel of John.

– “And the Word became flesh and dwelt among us, full of grace and truth; we have beheld his glory, glory as of the only-begotten Son from the Father” (1:14).

English Cardinal John Henry Newman summed up the Arian dispute succinctly in 1871: “The Arians said that [Jesus] was a creature—begotten, the Catholics that he was very God.”

So serious was the spread of Arianism that it brought conflict between Western and Eastern Christianity,  between clergy, and between clergy and laity. Peace in the Roman Empire was threatened!

To address that, Roman Emperor Constantine called the world’s bishops together to resolve the disagreements, at the First Ecumenical Council of Nicaea in 325 AD.

The bishops seemed unclear on exactly what the problems were — until Arius and his supporters presented their views before the council.

The Arians presented a creed, drawn up by Bishop Eusebius of Nicomedia, to the council stating: “The Son is begotten from what is not”, and interpreted Scripture to mean: 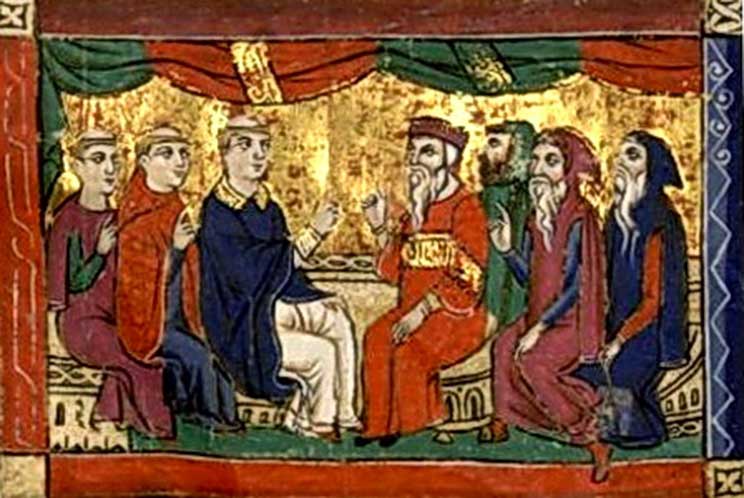 St Athanasius in argument at the Council of Nicaea, as depicted in the 12th-century manuscripts of William of Tyre.

Creeds or questions-and-answers as used in baptism were known in the Churches from as early as the 1st and 2nd century, with the belief that they originated from the time of the Apostles. The creeds and the New Testament canon were in part a response to heresy and the consequential need for the Church to state its teachings clearly.

St Paul’s first letter to the Corinthians is considered an extremely early creed of the Christian Church (note: a creed is a statement of belief).

At Nicaea, St Athanasius of Alexandria challenged and defeated the Arians, who were led by Bishop Eusebius and Arius. Thank God!

To cement the teaching of Christ’s divinity, a creed was agreed to by the Council of Nicaea (probably already partially drawn up by the likes of Athanasius and Bishop Alexander of Alexandria).

Known to us as the Nicene Creed, it included the crucial anti-Arian word “consubstantial” (from Latin consubstantialis; or in Greek homoüsion), meaning “of one substance” or “of the same substance or essence” to describe how Jesus relates to the Father.

This was the crucial point on which the two sides differed.

Arians argued that the term “consubstantial” was unscriptural, as it is not found in the Bible.

However, the defenders of orthodoxy had a solid history of the word from Justin Martyr (100-165 AD).

In his “Logos” arguments, Justin used the term usia to describe Christ and the Father having one usia (Greek) or substance or being. That was in reaction to heretics of that time who saw Christ as an influence (Christ as inhabited by a divine glory) and not a person — again, Jesus as not God.

What if heresy had won?

Had Arianism won, we would be a Jewish sect or pagan polytheistic religion, seeing Jesus as a prophet: a special prophet, a messiah (lower case), a semi-divine, even a junior god, but certainly not God.

The Arian rejection of consubstantial as not from the Bible was rejected by the Council Fathers.

Cardinal Newman noted in his 1871 text, in which he channelled St Athanasius: “As to their complaint about non-scriptural phrases, they themselves are evidence of its futility. It was they who began with their impious expressions; for, after their ‘Out of nothing’, and ‘Once was not’, going beyond Scripture in order to be impious, now they make it a grievance, that, in condemning them, we go beyond Scripture, in order to be pious.”

The Council Fathers obtained their interpretation that underpins the word “consubstantial” from Scripture and Tradition. This is very important.

Arianism was defeated at Nicaea in 325, but it was not stopped.

When Constantine finally converted to Christianity on his deathbed in 337, he was received into the Church by Eusebius of Nicomedia, who had defended Arianism at Nicaea.

Within ten years of the council, Athanasius (now bishop of Alexandria) was deposed and excommunicated at the first Synod of Tyre in 335. Arianism was on the rise again.

Athanasius fought back bravely, risking his life constantly. He kept writing to the bishops around the known world in an effort to suppress Arianism. His story is well worth reading; he survived numerous attempts to jail or kill him.

Arianism in various forms triumphed in 359, with the support of Emperor Constantius II, at the Councils of Ariminum (modern Rimini, for the Western Church) and Seleucia (for the Eastern Church).

The Nicene Creed was suppressed and a new creed, signed by most of the world’s bishops, was adopted.

The doctrine of consubstantiality (or homoüsion — that the first and second persons of the Trinity are of identical essence or substance) was rejected and the idea of homoion was presented as the correct interpretation.

Homoion is a biblical word meaning “similar” or “like”. It just isn’t applied when speaking of the relationship between Son and Father in Scripture. This was sophism in action — a play of words that had one intention only: to reject the Nicene Creed.

Arianism had triumphed and the Church authorities had succumbed.

There followed severe upheavals across Christendom amidst a terrible 12-year Arian persecution.

Pope Liberius of Rome himself is said to have fallen into error by signing off the false creed even a year before the councils of 359.

Athanasius died in 373 after a long struggle against Arianism. He is quoted as saying during the most severe of tribulations: “Athanasius against the World.” Many times he was completely alone, like Christ immolated for his belief and trust in God.

It took political power to defeat Arianism. The Roman Emperor Valens died in 378 and his successor Theodosius I restored orthodoxy.

The Nicene Creed was reconfirmed and fully reestablished at the Council of Constantinople in 381 AD.

Cardinal Newman was convinced that it is almost entirely because of the efforts of Athanasius that the Church was eventually redeemed: that Jesus was again worshipped as true God.

We owe what we have to St Athanasius and those who refused to be broken in holding to the True Faith.