As the Church marks 200 years of being established in South Africa, Günther Simmermacher gives an overview of Catholic history in the country.

The history of Catholicism in South Africa precedes colonisation by the Dutch by more than 150 years, with the first Mass on our soil celebrated by the Portuguese around December 1487.

After that, Catholics had to contend with the absence of Mass until the official establishment of the Church in the Cape, the bicentenary of which we are marking with celebrations this weekend.

Here, then, is a potted history of the Catholic Church in South Africa.

1487: The Portuguese explorer Bartholomew Diaz lands at Walvis Bay in present-day Namibia on December 8, the feast of the Immaculate Conception, and then sails south along the South African coast. He names modern Mossel Bay after St Blaise. The first Mass on South African ground is celebrated on the island of the Holy Cross (named by Diaz), off Port Elizabeth, in either late December 1487 or early January 1488.

1497: The Portuguese explorer Vasco da Gama names the land he sighted on Christmas Day on the east coast of South Africa “Tierra de Natal”. Though, like Diaz, he has missionary priests on board, no efforts at evangelising the people of the tip of Africa are made.

1501: The first Catholic structure — variously believed to have been a small chapel or hermitage — is built at Mossel Bay by João da Nova and dedicated to São Bras (St Blaise). 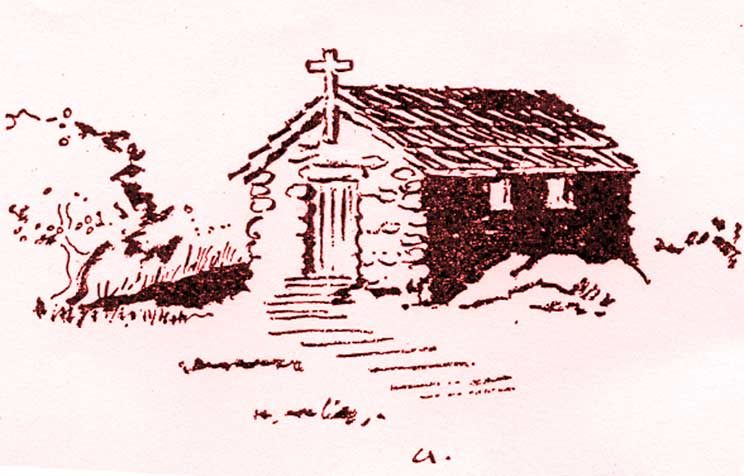 An artist’s impression of St Blaise chapel, the first place of Christian worship in Southern Africa. The appears in Historical Mossel Bay, issued by the Municipality of Mossel Bay.

1652-1804: The Catholic Church is not allowed a formal presence in South Africa under successive Dutch and British colonial rule, and the practice of Catholicism is severely curtailed. No resident Catholic priests are permitted, though visits by priests travelling on Portuguese or French boats were allowed on occasion.

1660: The French ship “Marichal” lands stricken in Table Bay, with Catholic clergy on board. Commander Jan van Riebeeck bans them from holding public assemblies on land for purposes of Catholic worship.

1685: Commander Simon van der Stel welcomes Jesuit priests on their way to Siam, and allows them to make astronomical observations. They visit the “numerous” Catholics in houses and hospitals and hear confession, but are allowed to celebrate Mass only on board their ship.  One of the priests, Fr Guy Tachard, later reported having met Catholics “of all countries and of all conditions, free, slaves, French, Germans, Portuguese, Spaniards, Flemings, and Indians”.

1685: The commissioner of the Dutch East India Company, Hendrik van Rheede, instructs van der Stel that Catholics may not to be admitted as free-burghers.

1798: A plan by the Holy See’s Propaganda Fide to establish a mission at the Cape of Good Hope fails.

1805: After the Dutch government allows religious toleration the previous year, the colonial governor permits the arrival of three Dutch Catholic priests. Arriving in October, one is given the task of evangelising the Khoisan. It is not known which building they were given for the celebration of Mass.

1806: The British reclaim the Cape Colony in January and quickly expel the three Dutch priests alongside other Dutch officials. No replacement priests are brought in. Whatever building the Dutch priests used for Mass is requisitioned to serve as a military hospital.

1818: Pope Pius VII erects the Apostolic Vicariate of the Cape of Good Hope (and adjacent territories), appointing his fellow Benedictine, the Englishman Dom Edward Bede Slater (1774-1832), as the first vicar-apostolic of the Cape. Having been denied a residency permit in the Cape Colony, Bishop Slater lives in Mauritius (as will his successor, Bishop Placide Morris).

1820: Bishop Slater arrives at the Cape on New Year’s Day and continues to Mauritius two weeks later. He leaves behind a young Irish priest, Fr Patrick Scully, to serve the local Catholic community.

1822: Construction for a Catholic chapel begins in Cape Town in October under Fr Scully’s supervision with funds raised by the Catholic community. Located in Harrington Street and holding 500 people, it comes into use in 1824, and is South Africa’s first parish church (the site is now a parking lot).

1824: Fr Scully leaves in July and is replaced by Fr Theodorus Wagener who in 1827 is joined by Fr Thomas Rishton.

1837: The Harrington Street chapel collapses after torrential rains due to the roof having been dismantled for an emergency replacement of the roof timbers.

1847: Following the retirement of Bishop Griffiths, Cape Town and Port Elizabeth are allocated their own vicariates of the Cape of Good Hope, with Bishop Thomas Grimley (1821-71) becoming vicar apostolic of the Western District, and Bishop Aidan Devereux (1801-54) of the Eastern District.

1850: The vicariate of Natal is established in November, with Bishop Jean-Francois Allard (1806-89) named as its first vicar-apostolic in January 1851. 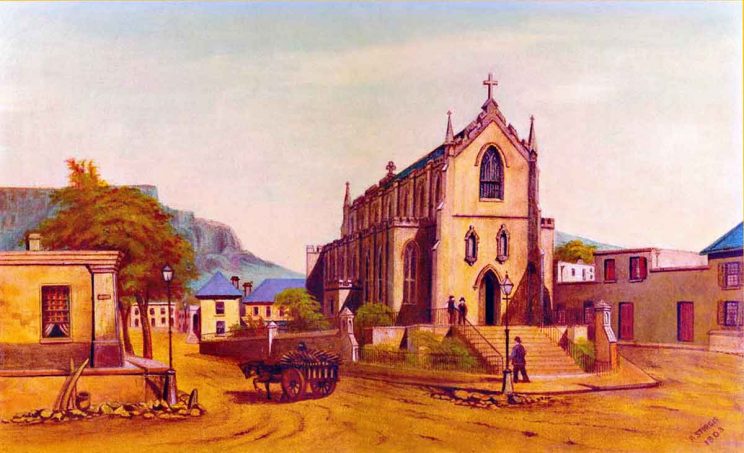 A painting by A Sturgis shows Cape Town’s St Mary’s cathedral in 1903. Consecrated in 1851, it is the mother church of the South African Church, which celebrates its 200th birthday this month.

1851: Cape Town’s St Mary’s cathedral, South Africa’s mother church, is consecrated on April 28 to Our Lady of the Flight Into Egypt, having been built on what was known as Tanner’s Square.

1852: The first missionaries of the new congregation of the Oblates of Mary Immaculate arrive in South Africa, at the invitation of Bishop Devereux and the interested support of Oblate founder St Eugene de Mazenod. It takes until 1862 until their missionary endeavours really take off after they are allowed to set up a mission by King Moshoeshoe, the founder of the Basotho nation. The Oblates go on to be the leading missionary in South Africa.

1854: The French Oblate Joseph Gérard arrives in Natal and is ordained to the priesthood in Pietermaritzburg. He serves the first eight years evangelising among Zulus. In 1862 he moves to Lesotho and becomes the apostle of that nation.

1880: At the invitation of Bishop James Ricards (1828-93) of the Eastern Vicariate, the Trappists send a group of monks under the leadership of Abbot Franz Pfanner to establish a new monastery at Dunbrody on the Sundays River near Port Elizabeth. The community moves two years later to land near Pinetown, outside Durban, which they named Mariannhill. The monastery grows fast, becoming the largest in the world.

1885: The first locally-founded congregation for religious women, the Precious Blood Sisters, are founded by Abbot Pfanner. Pope Pius X approves their constitution in 1906.

1898: Fr Edward Kece Mnganga is ordained as the first black South African priest, having been sent to Rome to study by Abbot Pfanner. Fr Mnganga dies in 1945.

1920: The Southern Cross is founded and incorporated into the Catholic Newspaper & Publishing Company by the bishops of South Africa and shareholders from the laity, vicariates and religious orders. Among its future editors, in the 1940s, is Fr Owen McCann (1907-94), who would become archbishop of Cape Town and South Africa’s first cardinal. He would return to edit the newspaper after retiring in 1986. 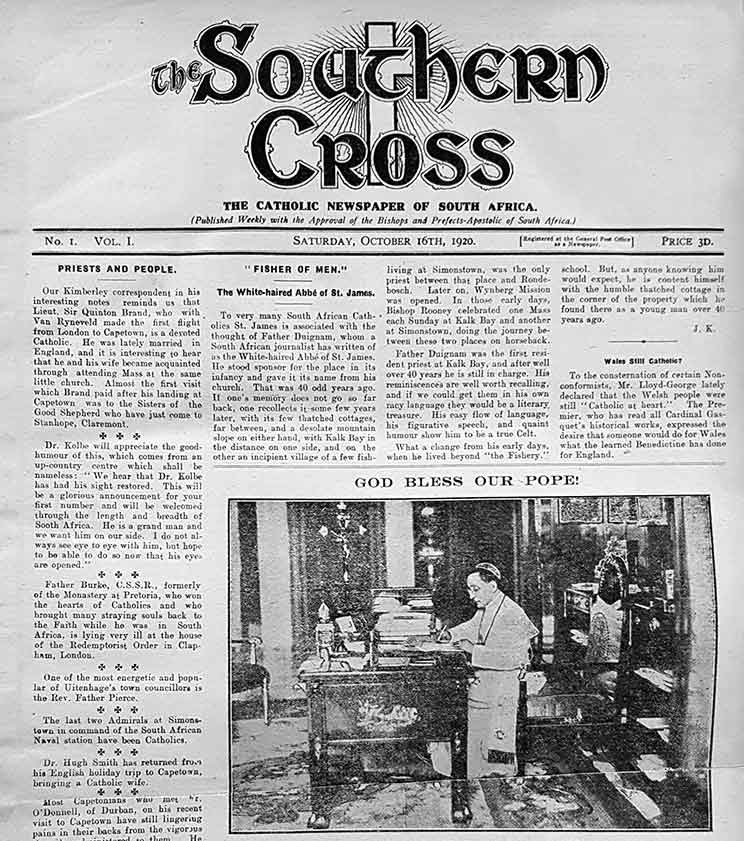 The first issue of The Southern Cross, dated October 26, 1920, with Pope Benedict XV on the cover.

1925: South Africa’s first locally-born bishop, the Oblate David O’Leary (1880-1958), is appointed vicar apostolic of Transvaal (now the archdiocese of Johannesburg), which was erected in 1886 with Bishop William Miller OMI (1858-1927) as its first head.

1946: Cape Town-born Fr Denis Hurley OMI (1915-2004) is appointed vicar apostolic of Natal. At 31 he is the youngest bishop in the world. He also becomes the youngest archbishop in the world, at 35, when his vicariate is elevated to become the archdiocese of Durban. He would head the archdiocese for 45 years, three more than his predecessor, Bishop Henri Delalle OMI (1868-1949).

1951: Pope Pius XII establishes the local hierarchy and the Southern African Catholic Bishops’ Conference (SACBC) is founded, with Archbishop Hurley as its first president. It includes four archdioceses: Cape Town and Durban, as well as Pretoria (erected in 1948) and newly-erected Bloemfontein.

1952: South Africa is placed under the patronage of Our Lady of the Assumption.

1953-55: With the enactment of the Bantu Education Act, the future of Catholic mission schools comes under threat as the government threatened to phase out subsidies within three years. After negotiations fail, the bishops embark on a huge fundraising drive, internationally and among the faithful, raising £976000 (around R221 million in today’s value) in late 1955. The Southern Cross is one of the main drivers of the appeal. The Catholic school system is thus saved.

1960: The SACBC issues another pastoral letter condemning apartheid, just a month before the Sharpeville massacre.

1962: Cardinal Giovanni Montini, who in less than a year becomes Pope Paul VI, visits South Africa and lays the foundation stone for Regina Mundi church in Moroka, Soweto, which will become South Africa’s largest Catholic church and the “Cathedral of the Struggle”.

1975/76: Springfield Convent in Cape Town becomes the first “white” school to decide to accept black students. With the prompting from religious in education, the SACBC in its January 1976 plenary session decides to open all of its 192 private Catholic schools in South Africa to all races, defying threats by the National Party government. It is the first instance of school apartheid being smashed.

1978: Bishop Peter Fanyana Butelezi OMI (1930-97), auxiliary of Johannesburg, becomes South Africa’s first black African archbishop when he is transferred to the archdiocese of Pretoria. He dies in office in 1997.

1984: Bishop Stephen Naidoo CSsR (1937-89) becomes South Africa’s first “non-white” archbishop when he is appointed to head the archdiocese of Cape Town, which he had served as auxiliary since 1974. He dies in office in 1989.

1986: The islands of St Helena, Tristan da Cunha and Ascension are transferred from the archdiocese of Cape Town, which had responsibility for them since 1852, to the newly-erected prefecture of the Falklands.

1999: St Augustine College, South Africa’s only Catholic university, opens in Johannesburg. The process leading up to its establishment was initiated by long-running Southern Cross columnist Prof Emmanuel Ngara and brought to fruition an objective stated by the bishops in the early 1950s.

2000: The SACBC Aids Office opens. In 2004 it will be the biggest non-governmental provider of antiretrovirals, saving thousands of lives.

2012: Radio Veritas, South Africa’s only Catholic radio station, goes on air on medium-wave. It previously broadcast on DStv since 2004 and on short-wave in 2002. 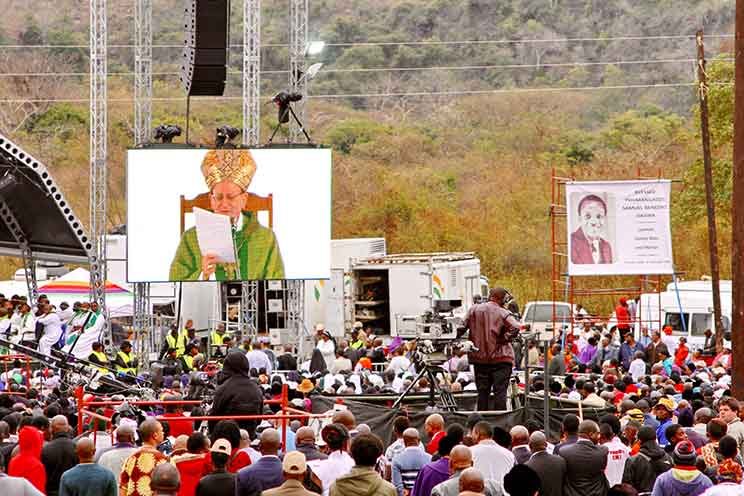 Cardinal Amato speaks at the beatification of Benedict Daswa in 2015.

2015: The martyr Benedict Daswa, a school principal murdered on February 2, 1990 by a mob, is beatified at Tshitanini village near Thohoyandou, Limpopo, by Cardinal Angelo Amato, the Prefect of the Congregation for the Causes of Saints. Bl Daswa is South Africa’s first beatus. The cause for Abbot Pfanner is still ongoing.

2017: The jubilee year to celebrate the bicentenary of the Catholic Church in South Africa is launched in Cape Town’s St Mary’s cathedral.