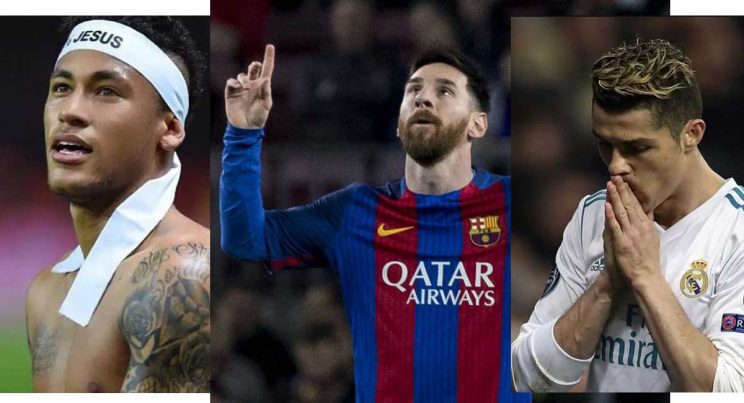 During this year’s World Cup, we will see many footballers cross themselves as they take to the field or after scoring goals, or exhibit their Christian faith in other ways.

Messi tends to cross himself and points to the sky after scoring. The Catholic player has said that unlike many other players, he has no superstitions. “I have a deep faith, and that’s enough,” he said.

The Barcelona superstar has said that when he wakes in the morning, he gives thanks to God for all that he may experience. Among his tattoos are an image of Christ and another of the Sagrada Familia, the famous cathedral of Barcelona.

Messi has reportedly said he will go on pilgrimage to the shrine of Our Lady of the Rosary of San Nicolás in Argentina if his country wins the World Cup. Teammate Sergio Agüero has said he’ll join him.

Brazil’s Neymar, a member of a Pentecostal church, also sports Christian tattoos. Among them are an image of Jesus, quotes from Ephesians and Corinthians, and various Christian declarations.

Neymar even has a teammate named Jesus! Manchester City striker Gabriel Jesus wears the number 33, for the supposed year of Christ’s crucifixion.

Cristiano Ronaldo has declared his talent “a gift from God”. Unlike other stars, Ronaldo has no tattoos – as a regular blood donor, he is not allowed to have them. But he collects chains with crucifixes or crosses.

His Portugal coach, Fernando Santos, is known as a deeply religious Catholic. After leading his side to the European Championships two years ago, he made a pilgrimage of thanksgiving to Fatima.

The top striker of the last World Cup, Colombia’s James Rodriguez, has declared his faith in the Lord who is “greater than the universe” on Twitter. The Bayern Munich player has religious tattoos and has said that he loves the silence of churches. Fellow Colombia striker Radamel Falcao often displays a T-shirt saying, “With Jesus you’ll never be alone.”

Another top striker who makes no secret of his Catholicism is Poland’s Robert Lewandowski. A teammate of James at Bayern, he has said that he is anything but ashamed of Jesus and believes that God is watching him. Lewandowski, regularly goes to church before games and has met the pope on several occasions.

France’s Antoine Griezmann, one of football’s hottest transfer targets, is another player to regularly go to church to pray. The Atletico Madrid star, who comes from a German family, is a Catholic who also wears his faith on his skin: his tattoos include images of Jesus, the Rosary, the Blessed Virgin, and Rio’s statue of the Redeemer. In his autobiography, he wrote that he had “bathed in religion since childhood

Not only strikers draw strength from Christ. Costa Rica’s goalkeeper Keylor Navas kneels in his goal before every game to pray, and places small statues of angels behind both posts. The Real Madrid star is known as “The Man of Faith”, as the title of a documentary on him has it.

He doesn’t mind if people laugh at him for his faith. “If I sought to be liked, I’d not be a servant of Christ,” he has said.

Germany’s Jerome Boateng comes from a very devout home and has many religious tattoos, including an image of the Blessed Virgin and a cross. His teammate Joshua Kimmich, another Bayern player, wears an armband featuring a cross.

Goalkeeper Manuel Neuer, a Catholic, financially supports a youth group run by a group of friars.

Their coach, Joachim “Jogi” Löw, is a Catholic who in his youth served as an altar server. In interviews, he treats his Catholicism as a natural part of his person.

Footballers have found many ways of making public their Christian faith. Some do so in words. England’s Raheem Stirling gives witness to Christ on social media (as does the scorer of Germany’s winning goal in the 2014 final, Mario Götze, who is missing this year), but few have gone to such lengths as Uruguay’s Edison Cavani, who wrote a book about the Christian faith.

And Croatia’s defender Vedran Corluka puts his money where his faith is. The Bosnian-born Catholic who wears the image of several saints on an armband, has helped finance the reconstruction of churches that were destroyed in the civil war of the early 1990s.

We’ll see this World Cup who has their faith on display on and off the pitch.