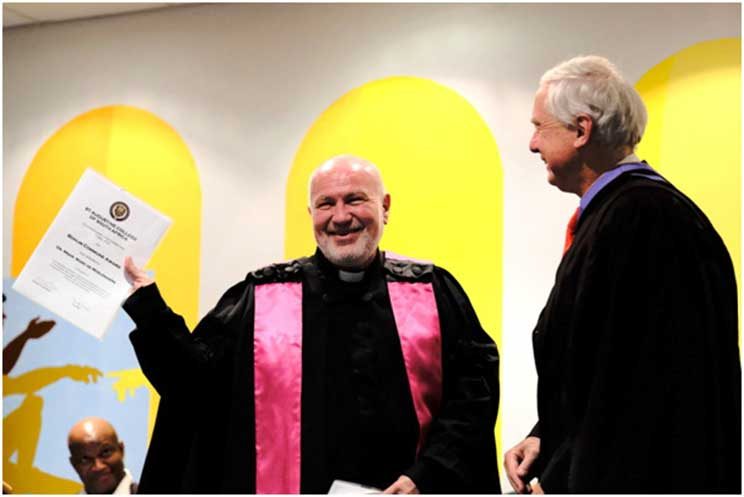 Mgr Marc de Mûelenaere was presented with the award at the university’s annual graduation ceremony at its campus in Victory Park, Johannesburg.

As is tradition, St Augustine uses its graduation event to confer the Bonum Commune Award on a worthy recipient.

What is the Bonum Commune Award?

Equivalent to an honorary doctoral degree conferred by state universities, the Bonum Commune Award celebrates those who have made an outstanding contribution to the common good.

Mgr de Mûelenaere has played an important role in the life of Pretoria archdiocese over the past 50 years, the college noted.

Apart from his pastoral contribution in rural, township and urban parishes, he has served as dean, chancellor, and member of the finance committee.

However, it is as a canonist that Mgr de Mûelenaere is probably best known: he has taught canon law at St John Vianney Seminary for many years, and is the founder and coordinator of the postgraduate canon law programme at St Augustine.

Over the past 32 years, he has trained most of the young priests of South Africa in canon law.

Other Awards for the Monsignor

Perhaps uniquely among the clergy of South Africa, Mgr de Mûelenaere has received honours from two popes, a president and a king.

Pope John Paul II named him a personal chaplain in 1993, and Pope Francis bestowed upon him the medal Pro Ecclesia et Pontifice.

President Jacques Chirac named him a Chevalier in the National Order of Merit of France, and King Albert II of Belgium made him an Officer in the Order of King Leopold.

St Augustine conferred its Bonum Commune Award on Mgr de Mûelenaere specifically in recognition of his service to the Church in Southern Africa and the outstanding support that he has lent to the university.

The ceremony was presided over by the grand chancellor of St Augustine, Archbishop Jabulani Nxumalo of Bloemfontein.

Why I Take the Risk of Loving Others

Pandemic Inspires Artist To Create Icon Of Christ As Healer

Caring for Seafarers in Corona Times