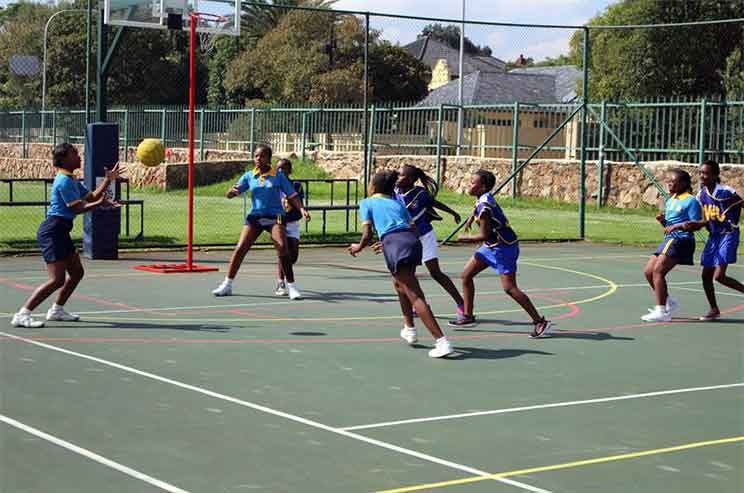 Students play netball during a sports festival at Sacred Heart College in Observatory, Johannesburg, at the launch of the Indlulamithi Project. The Indlulamithi project aims to share sports and academic resources among schools in the Yeoville, Observatory and Bellevue areas, and to work to make routes to schools safer. The project is tied to the Johannesburg Development Agency’s “Our City, Our Block” campaign.

By sharing resources like libraries, science laboratories and research centres, learners from both government and private schools will have access to high-quality learning facilities. This is why Sacred Heart College in Observatory, Johannesburg, launched its Indlulamithi Project this year.

The right to education is written into our Constitution; it is the right of every child in South Africa to be educated. Yet, many children are not at school.

Why are they excluded from what is rightfully theirs? Why are they suffering? Why do children from Yeoville—a Johannesburg suburb adjacent to Observatory, and once-vibrant, safe, rich in culture and heritage—live in fear of being attacked while walking to school? Why do they not play in the streets? Why do they not play and run carefree in parks and learn about the world around them?

These were the questions that for a long time plagued like-minded principals of schools in Yeoville and surrounding areas, who were frustrated with the lack of resources and afraid for the security of the children in their care.

The answer, sadly, is that Yeoville has seen the effects of urban decay:  crime, poverty-stricken homes, unemployment and impoverished living conditions.

Notwithstanding Yeoville’s decay, these school heads believed they could help make its streets safe again for children. They met to discuss ways of achieving this–and the Indlulamithi Project was born.

Nothing but the best

Why Indlulamithi, which means “giraffe” in isiZulu?

What can we give to children? Indlulamithi asks. How can we help them believe in themselves, that they deserve the best? How can we provide a safe environment for learning and playing?

The project attracted the attention of the Johannesburg Development Agency (JDA) as it aligned with their “Our City, Our Block” campaign.

“This is a strategic plan that JDA has implemented to engage with relevant stakeholders to build partnerships and develop communities,” said Ms Walker.

Thamsanqa Sibisi, deputy principal of Yeoville Boys’ Primary, explained that firstly their learners’ roll consists of about 1 200 boys, of whom many come from outside South Africa, mostly from the Democratic Republic of Congo.

This means that when they are enrolled, English is probably not their mother tongue, which is the language of teaching and learning at the school. Most of them speak French at home.

Secondly, the socio-economic conditions in Yeoville deprive them of being provided with the best education in the area.

“These, plus various other situational conditions, have prompted us as a school to continuously look for partnerships in our struggle for a better education for these boys,” Mr Sibisi said.

“That is where friendships come in. We have therefore partnered with other schools in the area, through the facilitation of Sacred Heart College, which has given us an opportunity to expose our boys to better facilities, different tuition,” he said. “We are partnered in academic, sports and extra-curricular activities.”

Helenne Ulster, principal of United Church School, expressed excitement at being part of the project, saying that the Sacred Heart initiative will pioneer the way forward in uniting schools in the Yeoville, Observatory and Bellevue areas.

Giraffes on the lookout

One such united action is to provide safe routes for leaners, as some parts of these areas are notorious for violence, crime and bullying of learners after school.

Plans are underway to build concrete giraffes along popular walking routes which will house surveillance cameras, serve as Wi-Fi hotspots, and display art from the talented children in the area.

“The new safe routes will give families, schools and our children great peace of mind when coming to school,” Ms Ulster said.

“The areas are in desperate need of a revamp and the renewed character will fortify the community, and we welcome the change.

“Keeping our children safe is our number one priority—and in this way all the role-players in the communities have an opportunity to get involved and realise the vision, thus restoring the spirit of ubuntu.”

Her school is also looking forward to the “new educational and cultural programmes this prolific initiative will bring to our learners”.

To launch the Indlulamithi Project to the community, a football and netball festival took place at Sacred Heart College, with its pupils, the Three2Six Project for teaching refugee children, United Church School, Yeoville Boys and Observatory Girls participating.

For more information and queries, contact Lynn Walker at marketing@sacredheart.co.za

How to Bully-Proof Your Child