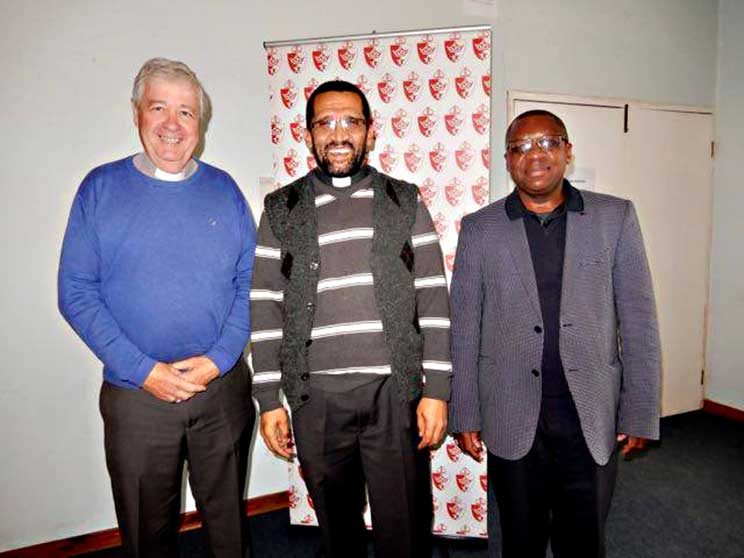 At their August plenary session in Mariannhill, the bishops of Southern Africa elected a new troika of conference president and vice-presidents.

Bishop Sithembele Sipuka of Mthatha was elected president of the Southern African Catholic Bishops’ Conference (SACBC). He will officially succeed the incumbent, Archbishop Stephen Brislin of Cape Town, in February next year.

The new troika will be the first in the SACBC’s history to comprise exclusively diocesan clergy.

The office of SACBC president does not give its incumbent authority over other dioceses, nor is he the “head” of the Catholic Church in the country. It can be understood as being similar to the role of a chairman of a board, who works collegially with the other bishops.

The day-to-day running of the SACBC is in the hands of the general secretariat, headed by secretary-general Sr Hermenegild Makoro CPS.

Each SACBC department has a bishop at its head, working with coordinating secretaries and officers.

The liaison bishops for the various departments will be elected during the first plenary session in January/February 2019.

Apart from the twice-yearly plenary sessions which bring together all bishops, an administrative board of bishops meets twice a year to discuss matters of management, finance and implementation of decisions.

Bishop Sipuka, who is also second vice-president of the Symposium of Episcopal Conferences of Africa and Madagascar, was born on April 27, 1960, in Dutywa in the Eastern Cape, also former President Thabo Mbeki’s birthplace.

He was ordained to the priesthood in December 1988 for the diocese of Queenstown.

Bishop Sipuka was appointed to head the diocese of Mthatha in February 2008 and succeeded Bishop Oswald Hirmer in May that year.

He holds a PhD in systematic theology from Unisa. His doctoral thesis was titled “The sacrifice of the Mass and the concept of sacrifice among the Xhosa: Towards an inculturated understanding of the Eucharist”.

Bishops Mpako and Rose have headed their dioceses since 2011 and 2008 respectively.

Remarkably, all three bishops in the new troika are former rectors of seminaries.

Bishop Rose preceded Bishop Sipuka as St John Vianney rector from 1991-97, and Bishop Mpako was rector of St Paul’s Preparatory Seminary in Pretoria from 1991-94 and of St Peter’s from 1999 to 2004.

Bishop Sipuka On His Life, His Diocese and South Africa
Share