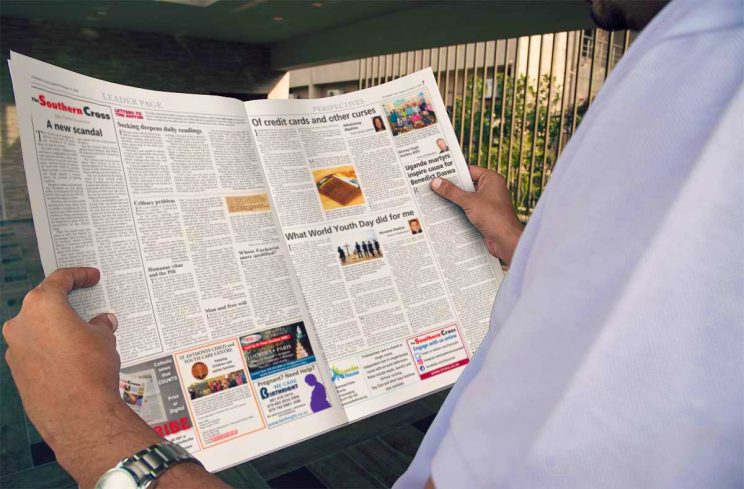 I was encouraged by the honest comments on media by the president of the Southern African Catholic Bishops’ Conference, Archbishop Stephen Brislin, at the bishops’ August 2018 plenary session.

His comments indicate an agreement with the recent Southern Cross editorial, which the archbishop referred to, and other Catholic media people that the Church’s social communications are not up to standard, and require revamping — with the help of professional journalists.

Taking communications seriously does not necessarily mean that one engages in spin or political image-styling. It is making sure that your message reaches the world in a clear and uncorrupted state.

It has worked well with Pope Francis, as far back as when he was still Archbishop Jorge Mario Bergoglio of Buenos Aires, Argentina. He appointed the journalist— and now author of the book Pope Francis: Life and Revolution — Elisabetta Piqué.

It is no exaggeration to say that she saved not only his image but also his career when he was being unfairly attacked by untrue rumours that he had sided with the Argentinean military in persecuting priests when he was the Jesuit superior.

Alas, those forces have still not completely relented, but the dirt of gossip and rumour doesn’t stick because the world and the Catholic faithful understand the pope’s message clearly, and so are able to judge for themselves based on real facts.

Archbishop Brislin in his homily posed pertinent questions: “Is  there  room  in  some  instances, other than  doctrinal, for a  divergence  of views  to be  expressed on the  same  issue — by bishops, theologians, lay people?  In short, must  our communication only reflect that  which we  have reached consensus on as a conference?”

Put another way, is there room for the Holy Spirit to breathe life into our union as Catholics from different backgrounds of political and social schools of thought? After all, this is how the Lord, the Giver of Life, continues renewing the world.

The archbishop went on to warn us against the temptation of competing in political and social spaces when we should be the salt of the world and the yeast to the dough of its progressive spirit.

In the past, this balance of faith-based wisdom infusing virtue into world actions the Church has not been able to maintain properly. The Southern African Church in particular has opted for too much caution, thus hiding its light under a bushel.

The Church in Nigeria and the DRC  has taken a more confrontational stance, opting to soil her robes in the streets of political mud. Perhaps the Holy Spirit is justified in both these cases.

READ  Pope: When the Devil is Unleashed, Humility is the Only Weapon

My personal sentiment, and that of the current pope, is to prefer a muddied Church if that is the price of standing with the downtrodden, poor and marginalised. For what is the point of shouting “Peace, peace” when the street of Harare are oozing blood? When the political elite are siding with the wealthy to oppress the poor and rob them of their hope?

The Church and Land Distribution

I was also glad to notice that the bishops have put into their agenda the discussions about land redistribution and expropriation. If ever there was a clear example of the Church’s poor communications, it is on this issue. The Church has a very progressive and prophetic land redistribution policy, but it is hidden in clear sight. Most Catholics in the region don’t even know about it. Where’s “perspective and wisdom” in that?

Of course it is also the responsibility of the faithful to keep abreast of the Church’s latest news. Sadly, this is not happening as it should, otherwise Catholic publications like The Southern Cross would be booming. So the faithful, not just the bishops, must also shoulder part of the blame.

Few people know about the online journal Spotlight.Africa, which runs up-to-date news and commentary on issues of the day from a Catholic perspective (including — full disclosure — by myself). It is independent and, in my opinion, competes favourably with the best of what is out there.

We all need to do some serious self introspection about how we wish to be portrayed as Catholics in our region — to be honest about our own failings also, and not just complain about the hostile world when we also hide our light under a bushel.

To rectify this failing, the Holy Spirit, the Lord who is the giver of all Life, has blessed us with a Pauline pope who’s not afraid to confront the world with Gospel values. We dare not fail him due to our reclusive and regressive tendencies.