Praying for Peace at the Pentagon 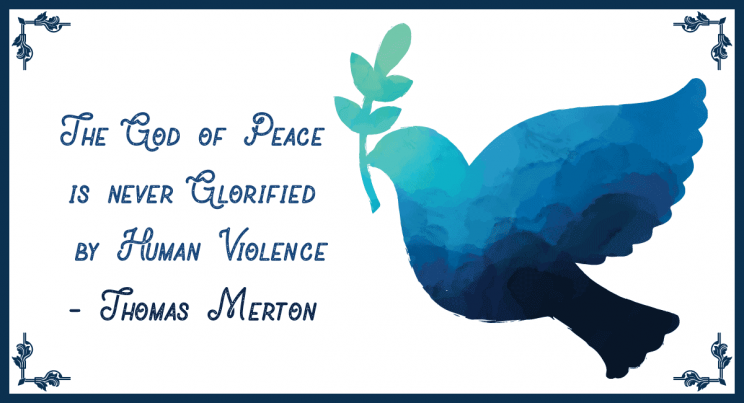 Every Monday morning for the past 30 years, members of the Dorothy Day Catholic Worker community in Washington, D.C. have been making their way across the Potomac River to pray and nonviolently witness for peace in front of the most symbolic war planning, war-making headquarters on earth: the Pentagon.

Just days ago on August 6 – the 73rd anniversary of the U.S. nuclear bombing of Hiroshima, Japan – I joined them, along with 19 members of several other mostly Catholic faith-based organizations.

Facing the Pentagon, we held signs calling for an end to all nuclear weapons. And we prayed to the God of peace (1 Thess 5:23) for the full conversion of all hearts and minds from war-making to peace-making.

Together with the Holy Spirit, we were hoping to awaken the consciences of military and civilian workers walking toward the Pentagon. But nearly everyone tried to ignore our Christ-centered message of peaceful nonviolence.

One member of our group was arrested for bravely moving outside of the Pentagon police designated protest zone, and onto the sidewalk used by workers entering the Pentagon. Her purpose was to make it harder for Pentagon employees to ignore her sign saying “Hiroshima and Nagasaki: A butchery of untold magnitude.”

That statement was taken from soon to be canonized Pope Paul VI’s World Day of Peace Message in 1976, in which he clearly condemned the nuclear bombing of Japan. He wrote, “If the consciousness of universal brotherhood truly penetrates into the hearts of men, will they still need to arm themselves to the point of becoming blind and fanatic killers of their brethren who in themselves are innocent, and of perpetrating, as a contribution to peace, butchery of untold magnitude, as at Hiroshima on 6 August 1945?”

On that day over 70,000 people – mostly civilians – were killed when a United States Boeing B-29 bomber dropped an atomic bomb on that Japanese city.

Then on August 9, 1945 the U.S. dropped a second atomic bomb, this time on the Japanese city of Nagasaki, killing at least 60,000 people – again mostly civilians.  Nagasaki was the centre of Japanese Catholicism. An added tragic irony here is that the U.S. crew that dropped this atomic bomb was “blessed” by a Catholic chaplain – the late Father George Zabelk, who later had a total conversion, spending the remainder of his life as a nonviolent Catholic peace activist .

Today, nine nations possess approximately 15,000 nuclear weapons. And especially dangerous is the fact that the U.S. and Russia have hundreds of nuclear weapons aimed at each other on high-alert status ready to be launched within minutes.

On July 7, 2017 the Treaty on the Prohibition of Nuclear Weapons was adopted by an overwhelming majority of the world’s nations. But unfortunately, the U.S. and the other eight nuclear weapon countries refuse to sign and ratify it. However, Catholics should prayerfully consider that the Holy See was equally the first nation to sign and ratified it.

To learn more about this immensely important treaty, and how you can help abolish nuclear weapons, visit the International Campaign to Abolish Nuclear Weapons – recipient of the 2017 Nobel Peace Prize . And please visit the Catholic Nonviolence Initiative and Nonviolent Peaceforce (https://www.nonviolentpeaceforce.org/).

As followers of the nonviolent Jesus, let us form our lives by the words of the famous Trappist monk Thomas Merton: “The God of peace is never glorified by human violence.”