Catholics Who Do the Devil’s Work 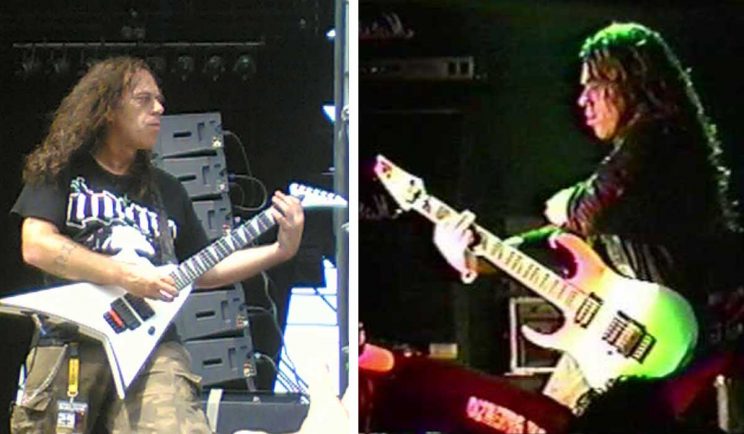 The last place you’d expect to find a practising Catholic to ply his trade is in a satanic rock group called Deicide. But so it was with Ralph Santolla, a guitarist who died in June at the age of 51.

As a member of Deicide, Santolla shared a stage with the band’s leader, a professed satanist by the name of Dick Benton. It seems that the Catholic and the devil worshipper got on well personally.

Deicide fans, however, protested against Santolla’s membership in the band, since these people don’t like the idea of a Christian doing the devil’s work—much, I suppose, as our side might object to a satanist doing God’s work.

Some Deicide fans even issued death threats against Santolla, who once declared his favourite Deicide song was one which itself called for Jesus’ death (maybe it had a nice tune).

Santolla didn’t give in to the satanic intimidation, saying he wouldn’t betray his faith just to be liked. “At the end of the day, I just want to play my guitar and play metal and have a good time,” he said.

When he left Deicide in 2007, it was over boring business matters, not a clash of faiths.

He died on June 6 after being in a coma following a heart attack.

I have been unable to find any information about whether Santolla received a Catholic funeral. I hope he did, and I hope he died a spiritually good death.

Rick Santolla made no claims to being a saint, but there is strength in defiantly holding on to your Catholic faith in an environment where that faith is not just actively despised but even the cause for receiving death threats.

Members of satanic bands are no role-models, of course. It’s never okay to engage in blasphemy and other forms of darkness. Santolla the guitarist is absolutely not to be commended for his vocational choices.

But Santolla the man refused to deny Christ, even when pressured to do so. He should have walked away from the satanic stuff, but he was in it and still remained a Catholic. Many good and decent Christians lack that kind of fortitude in much less daunting conditions.

Santolla is hardly the first practising Catholic to have meddled in Satan’s work. How many politicians and businesspeople aren’t doing the devil’s work behind a mask of piety?

Take General Augusto Pinochet, the military dictator of Chile from 1973 to 1990 who tortured and killed political opponents. Pinochet went daily to Mass, receiving the Eucharist on the very tongue that ordered so many deaths of those who sought democracy.

Or take the British entertainer Jimmy Saville, who had a papal medal to go with his knighthood from the queen to prove just how great a Catholic he was. After his death it emerged that he was a serial rapist of underage girls.

Who of these three was the “better” Catholic?

Neither Santolla, Pinochet nor Saville are likely to be anything like you or me (presuming that you, dear reader, are not a rock musician playing in a satanic death metal band, political mass murderer or serial rapist). They had their faith; whether that qualified them for salvation is entirely God’s business.

But these men, and so many others like them, are worth looking at. And then let them look back at us with the question: “Yes, but are you so free of hypocrisy yourself?”

Even if we are nothing like them at all, the answers to an honest introspection might still surprise and perhaps even disturb us.

Path to the Passion: The Two Trials Of Jesus
Share