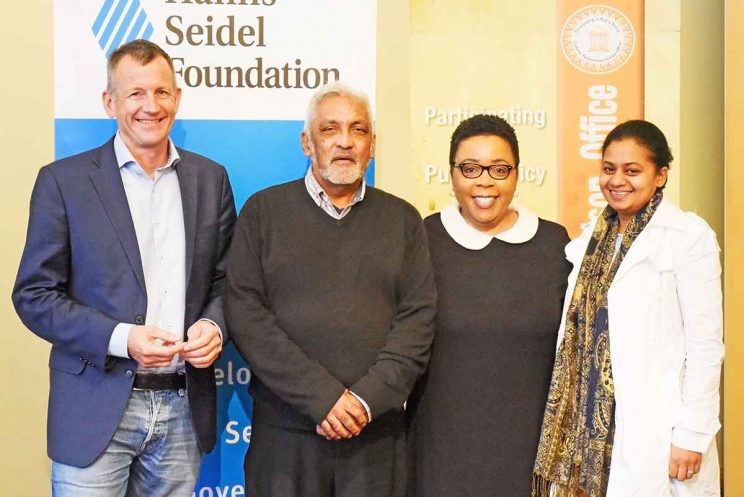 (From left) Dr Jakkie Cilliers, Fr Peter-John Pearson, Dr Nomsa Masuku and Janine Ogle at a roundtable conference hosted by the Catholic Parliamentary Liaison Office on how prepared the nation is for the 2019 general election. Fr Pearson is the CPLO director.

The Catholic Parliamentary Liaison Office hosted a roundtable discussion on whether the nation will be ready for the 2019 general election.

Statistics show that only 75% of those eligible to vote are actually registered to vote.

“There is a link between politicians and voting,” explained Dr Masuku. “When people are disillusioned by leaders and politics, they take it out on voting stations. People say, ‘You are telling me to come out and vote, but I don’t see what voting is doing for me,’’’ she said.

According to studies, a large portion of the youth fall into the “missing 25%” bracket.

However, unlike in other countries, it is not because the youth are not interested in politics. “The youth in South Africa are strongly engaged in politics,” said Dr Masuku, “they are just not engaged with voting registration.”

A key focus was the importance of the Electoral Commission (IEC), the independent body responsible for South Africa’s election management. Milestones for the IEC include the deadline for registered voting in February 2019; candidate nominations in March-April 2019; and the election itself in May-August 2019.

Dr Masuku noted that the IEC welcomes questions regarding all election processes.

“If you mishandle elections, you can cause a war tomorrow. That is why the IEC deserves a little more scrutiny,’’ she said. “However, accusations that are not backed up by facts can be harmful as they cast doubt on the IEC,’’ Dr Masuku warned.

She stressed that critiques and questions from the public, backed up with facts, were a must, especially in regard to guaranteeing the integrity of the elections.

The IEC Will Always Be Under Scrutiny

“Scrutiny of the IEC can never be enough. The IEC is in charge of your future,” Dr Masuku said.

Dr Cilliers detailed the positive and negative elements of the upcoming election.

Positives, he said, included the facts that the 2016 local government elections were more prone to violence than the 2019 national/provincial elections are; Zuma is no longer in power; the country has the promise of a more coherent and effective government.

Dr Cilliers predicted that the national battle will largely hang on Gauteng province.

She also said it was very disturbing that private funding of election campaigns is still unregulated, with no law to compel political parties to disclose the names of persons or organisations that donate.

This means the public is not informed about where political parties get a large share of their money from and how they spend it.

Last year My Vote Counts successfully applied to the Constitutional Court to have the Protection and Access to Information Act revised to force political parties to declare their donors.

This year the court ordered parliament either to review the Act or pass new legislation to compel parties to declare who their donors are.

Civil society groups, such as My Vote Counts, fear Ramaphosa is being pressured not to sign the Political Party Funding Bill until after the 2019 election, and are lobbying for the president to sign the Bill this year.

“If passed, the 2019 general election will mark the first time South Africans go to the ballot knowing who is providing financial backing to the parties,” Ms Ogle said.