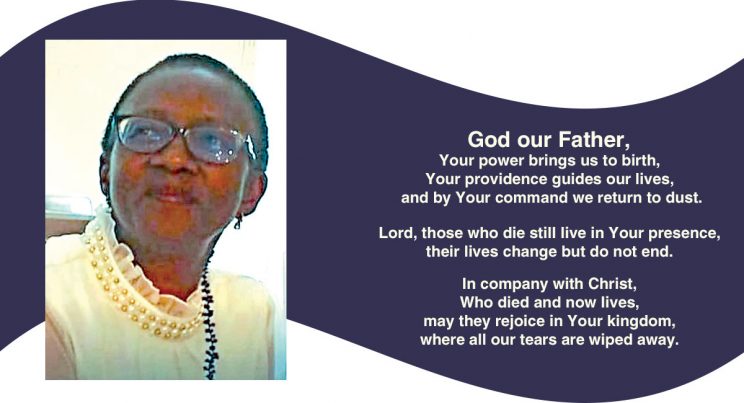 Buyi Nkosi, with her husband Jabu, worked tirelessly for the Catholic Church Family Ministry, both nationally and in the diocese of Witbank.

Mrs Nkosi was one of the representatives of the Southern African Catholic Bishops’ Conference during the Synod on Family in Rome in 2015.

“During this time Mrs Buyi was already not well, but she had the courage to represent the local Church during the synod,” said SACBC secretary-general Sr Hermenegild Makoro at a memorial Mass at the conference’s Pretoria headquarters, Khanya House.

Mrs Nkosi and her husband were very generous with their time in serving the Church, Sr Makoro said. She applauded Mrs Nkosi for her firm faith: “During the last moments of her life she stood by her faith and requested a priest for anointing. She died still being connected with Christ.”

Sr Makoro said Mrs Nkosi had touched her own faith: “She has challenged me to see the importance of remaining connected to Christ always.”

Bishop Joe Sandri of Witbank, in a letter, said: “We are very grateful for all Mrs Nkosi did with such generosity and dedication, for her family, the Church and the community at large. She has been a shining example of a wife, mother and Christian values.”

Mrs Nkosi was a parishioner at Witbank’s cathedral of Christ the King parish, under the care of Fr Molewe Simon Machingoane, who worked with her in the family ministry.

She is survived by her husband, children and grandchildren.

Mrs Nkosi’s Requiem Mass was celebrated on September 29 at Christ the King cathedral.

The Feast of St Stephen, First Martyr of the Church
Share