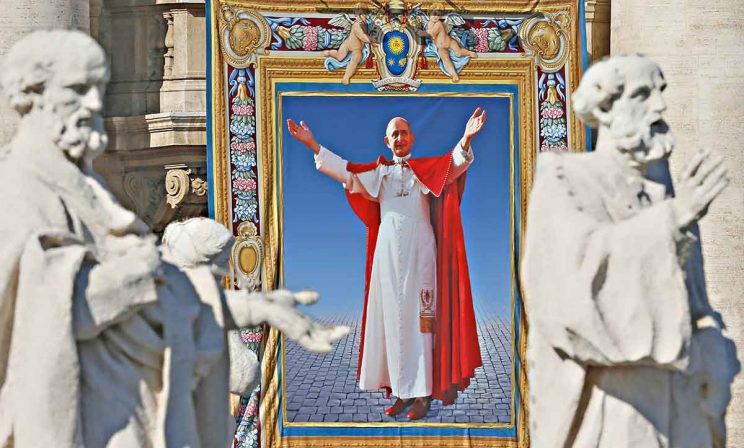 Pope Paul VI is depicted in a tapestry on the facade of St Peter’s basilica during his beatification Mass in 2014. He was canonised there on October 14. (Photo: Paul Haring/CNS)

As the pope who oversaw much of Vatican II and its aftermath, Paul VI had to steer between continuity and innovation, as FR Valentine Iheanacho MSP explains.

In many respects, the 1963-78 pontificate of Paul VI, who was canonised on October 14, is depicted as one of change and transition.

The post-Vatican II Church under Paul VI was a Church of change and transition, marked by numerous and courageous experiments, accompanied by tensions and uncertainties.

Paul VI is equally described as the first modern pope, called to the throne of St Peter to shepherd a Church which was also called to be proactive at the service of the modern world.

The Church was called to shun isolationism. She was forced by events, circumstances and developments to shed the cloaks of a spectator and a victim in the face of many challenges of the 1960s and 1970s.

Not one among the 80 cardinals who entered the conclave on June 19, 1963, better understood those challenges than Cardinal Giovanni Battista Montini of Milan.

The majority of the “progressive” cardinals recognised this fact quite early as Montini had demonstrated great openness and understanding during the first session of the Second Vatican Council (October to December 1962).

From the perspective of the “progressives” and the mindset of Montini, the major preoccupations for the Church at the time were not necessarily those of restoring the Catholic State in many European countries; nor the fight against communism nor even the fear of watering down Church doctrines.

They were primarily about how to weather the storms of challenges posed by changes and developments of the modern world. Those challenges demanded three major things of the papal ministry of Paul VI: committed and continuous teaching; fair dialogue; and faithfulness to the teaching and directives of the Second Vatican Council. They demanded as well that all three must be done in the spirit of simplicity without recourse to the spirits of triumphalism and arrogance of the past.

One of Paul VI’s great qualities was his ability to steer the middle course between two extremes in the immediate postconciliar years. To put it mildly, the Church under Paul VI was highly polarised.

In the course of the Council, Paul VI saw his role as that of the supreme moderator of the Council — and not its glorified secretary. He was convinced that it was incumbent upon him to intervene whenever he judged it necessary and opportune.

Both during and after the Council, he was under severe stress to avoid any fracture within the Church that would lead to schism.

He was often misunderstood in his reconciling role as the successor of Peter who must confirm his brethren in faith, govern with leniency, and strive to preserve apostolic charity and unity among the contending parties.

Among other things, the hardliners led by the personnel of the Roman curia accused him of weakening pontifical powers and authority for not wielding the heavy stick on their perceived enemies among the “progressives”. And as far as the “progressives” were concerned, Paul VI did not go far enough in the implementation of the directives of Vatican II, especially in terms of episcopal collegiality.

Those various attitudes towards Paul VI found outlets and reached their peak in the traditionalist intransigence of Cardinal Marcel Lefebvre (later founder of the Society of St Pius X) and in the so-called  Dutch Pastoral Council in the Netherlands (six sessions from 1966 to 1970). The extreme positions of both groups tried the patience of Pope Paul VI to its very limit and even at that the pontiff showed a lot of restraint.

Lefebvre, in his obduracy, contested everything about the Council, from religious liberty and independence of Africa to liturgical reforms. After every attempt at dialogue and persuasion had failed, Lefebvre was only in 1976 suspended a divinis (an ecclesiastical punishment that consists in the suspension of the divine offices).

On the progressive side, the excesses of the Dutch Pastoral Council alarmed not only traditionalists but even some moderates who nursed some sympathy for their ideas.

Due to the confusion caused by the Pastoral Council in blurring the spheres of ecclesiastical functions between ordained ministry and the common ministerial priesthood of all the faithful, many priests and religious in the Netherland left the priesthood and the religious life.

As a consequence, the Church in the Netherland was one of the first local Churches in Europe to experience a vocations crisis, which has worsened in the past 50 years.

The 1966 Dutch Catechism equally caused quite a stir by its overt reduction of the Christian faith to mere anthropological and psychological aspects. Paul VI expressed his pain and disapproval about the turn of events in the Netherlands to Cardinal Bernard Alfrink of Utrecht, considered one of the leaders of the liberals at the time.

The 1960s can rightly be termed the golden period of ecumenism in the contemporary history of the Church and other Christian churches.

Those years were the full springs of efforts and initiatives to heal centuries-old divisions, mutual suspicion and antagonism among the followers of Christ. A lot of enthusiasm was generated and complemented by concrete steps in terms of reciprocal visits and expressions of goodwill.

In this regard, the three famous journeys of Paul VI come to mind: Jerusalem in1964, Istanbul in 1967 to visited Orthodox Patriarch Athenagoras, and Geneva in 1969 for the meeting of the World Council of Churches.

In his speech to those gathered in Geneva, Paul VI did not deny his universal Petrine office, which he articulated by pronouncing “Our Name is Peter”, but he quickly added that it was “a ministry of communion”.

Both within his own Church and in the ecumenical rapport with sister Churches, Paul VI often stressed that apostolic authority was sustained with simplicity, service and trust. This explains why he was the last pope to use the papal tiara which had been worn by popes since the 8th century.

As the first modern pope, Paul VI was also the first one to travel outside Italy since 1870 when Pope Pius IX made himself “prisoner of the Vatican” to protest the annexation of Rome by the modern Italian state.

Addressing the UN General Assembly on October 4, 1965, Paul VI called the Catholic Church an “expert in humanity” and in the name of all humanity implored the UN to work for a better world, to guarantee peace, justice, opportunities and liberty for everyone.

The international outreach of Paul VI meant that many countries became eager to establish diplomatic ties with the Holy See. And through his Ostpolitik, Paul VI inaugurated the Vatican’s policy of rapprochement with Eastern Europe which was then under the domination of the communist Soviet Union.

Pluralism in a vibrant Church

Pope Paul VI both as a reformer and as the Supreme Pastor of the Church fostered theological freedom which flourished in terms of pluralism of opinions, although sometimes they generated doctrinal uncertainties and confusion.

Even when pushed to take drastic decisions, he restrained himself and rather preferred to suffer alone in his solitude as an intrinsic part of his ministry as the universal Pastor of the Church.

He chose the ways of persuasion and admonition in order to win those with divergent opinions that were not always orthodox. He was convinced that pluralism was a sign of a Church that was alive where innovations and renewals were not to be truncated but encouraged and directed.

In such an atmosphere of openness, Paul VI sought to direct the Church away from monologue to dialogue, to conversation and to plurality of voices.

However, his patience was not limitless and that brought about some dark spots in his pontificate.  One of the dark spots was the laicisation of Dom Giovanni Franzioni in 1976 for the public declaration of his intention to vote for the Italian Communist Party.

Another was the removal of Cardinal Giacomo Lercaro from the archdiocese of Bologna in some inexplicable circumstances. Lercaro was one of the leading progressive voices both during and after Vatican II.

With his 1975 apostolic exhortation, Gaudete in Domino (On Christian Joy), Paul VI asked the Church to bring optimism to a world where bad news travels faster than the good news. His optimism towards human labour and progress was religious optimism which reposed every trust and hope in the Holy Spirit.

His earlier documents — Populorum Progressio (1967), Octogesima Adveniens (1971), and Justice in the World (1971) — already set the tone. With Evangelii Nuntiandi (1975), Paul VI grouped every effort and initiative of the Church under evangelisation and mission as a service to the world.

As “the Church travels with humanity and shares its lot in the setting of history”, every local Church was encouraged to be autonomous and responsible in taking concrete initiatives and steps in working for justice, peace and the development of its immediate locality.

In terms of advocacy for social justice, the Church during the pontificate of Paul VI both at the universal and local levels was aglow with activities and emanation of documents that have enriched Catholic Social Teaching.

In his book published in July this year, La Nascita di un Enciclica (The Birth of an Encyclical), author Gilfredo Marengo discusses the existence of an already finished encyclical that was never published.

Entitled De nascendae prolis, it incorporated the report of the commission set up by Paul VI to study the question on birth control. After a thorough  consideration of its content and recommendations, the pope imposed a veto on that document and forbade it from been published.

In its place, Humanae Vitae was published in 1968. The encyclical was instantly controversial for restating the Church’s prohibition of artificial birth control.

Despite his many reforms and openings in numerous areas, Humanae Vitae appeared to have defined the pontificate of Paul VI. Amid misunderstanding and the unpopularity it brought upon his pontificate, Paul VI was convinced that time would prove him right. He told the Canadian priest Édouard Gagnon: “Don’t be afraid! In 20 years time, they will call me a prophet.”

Beyond the controversies around Humanae Vitae, Paul VI was truly a prophet who displayed immense pastoral fortitude in his Petrine ministry. He was a man of vision who lived ahead of his time. There is no aspect of the life of the Catholic Church today that does not bear his imprints and prudent reforms.

Assailed by oppositions, especially from the traditionalist wing, he remained undeterred and gave the Church a Roman curia that was international in its composition and modern in its mode of operation.

With regard to the main bone of contention at the time — the correct interpretation of Vatican II — Paul VI remained unwavering in insisting that it should be understood in the light of the Council of Trent. That required a delicate balance between the tradition of yesterday and the innovations of today and tomorrow.

Paul VI will be canonised on October 14 in recognition of his heroic virtue lived in constant worries for the good of the Church of Christ like St Paul the Apostle, his patron.

Fr Valentine Iheanacho MSP is a research fellow in the department of Historical and Constructive Theology of the University of the Free State.