The Martyrs of Lübeck: Frs Hermann Lange, Eduard Müller, Johannes Prassek and Lutheran Rev Karl Friedrich Stellbrink, who were executed together by the Nazis 75 years ago on November 10.

November 10 marked the 75th anniversary of the execution of three anti-Nazi priests and a Lutheran pastor whose witness and friendship across sectarian lines inspired ecumenical relations, as GÜNTHER SIMMERMACHER writes.

As the three Catholic priests and the Lutheran pastor — the martyrs of Lübeck — serenely went to their execution on November 10, 1943, they won a victory over the Nazis.

Shortly before Fathers Johannes Prassek, Eduard Müller and Hermann Lange and Lutheran pastor Rev Karl Friedrich Stellbrink were led from their cells in a Hamburg jail, they were given pen and paper to write their farewell letters.

The content of these letters, so in defiance of the physical brokenness and months of mental anguish their writers had suffered, angered the Nazis who never sent them on to the addressees.

Minutes later, the four men were beheaded, one after another at intervals of three minutes, their martyrs’ blood running together on the floor to give concrete witness to ecumenical friendship and courage.

That friendship had begun in 1941, the year before their arrest, during a funeral in the historic northern city of Lübeck, about 65km north-east from Hamburg.

Fr Prassek, born in 1911, met the 17 years older Rev Stellbrink at a funeral in 1941. A friendship across denominational lines grew, one which was unusual at the time, more so in a historically Protestant city.

Rev Stellbrink had initially been a keen supporter of Hitler, but living under Nazism cured him of that. In 1937 he was expelled from the NSDAP, the Nazi party, for refusing to denounce his friendship with Jews. Then there was the war, of course, but the tipping point was a funeral for some local party bigwig at which the Nazis demanded that the crucifix be covered.

His friendship with Fr Prassek and the other two priests at the city’s Sacred Heart church, Frs Müller and Lange, solidified the once strongly anti-Catholic pastor’s opposition to Nazism

Among Lübeck’s Lutheran clergy, Rev Stellbrink stood alone; his diocese was loyal to the regime.

The Catholic priests at Sacred Heart, meanwhile, were quietly active. Fr Lange, the intellectual of the trio — all of whom were born between 1911 and 1912 — was the most political of them all.

Highly influenced by the renewal movement proposed by the Catholic philosopher Romano Guardini (whose work later influenced an Argentinian Jesuit by the name of Mario Jorge Bergoglio), Fr Lange went so far as to advise young Catholics that it was immoral to fight for Germany in the war.

Fr Müller, the gentle youth chaplain, was the least political of the three, but not ignorant of the regime’s poisonous anti-Catholicism. He saw himself as a “soldier for Christ” who was ready for his persecution. Indeed, he predicted that one day he would land up in a concentration camp.

Fr Prassek was also aware of the dangers of speaking out. But, as he once told a friend: “If even the priests won’t speak out, who will?”

With loyal parishioners the three copied and distributed the sermons of the Catholic bishop of Münster, Count Clemens von Galen, who was a thorn in the Nazis’ side. It is believed that Rev Stellbrink also copied Galen’s sermons.

It is a sign of the parish’s solidarity that for a long time the Nazis were oblivious to the extent of the priests’ subversive activities, one Gestapo raid in 1941 aside.

On the night to Palm Sunday 1942, March 28-29, Lübeck became the first German city to be bombed by the British.

The medieval district around Sacred Heart church was in flames, including the Lutheran cathedral up the road, an imposing 13th-century building. Fr Prassek distinguished himself by rescuing patients from the burning Catholic St Mary’s hospital opposite his church. For his bravery, the city awarded him a medal. 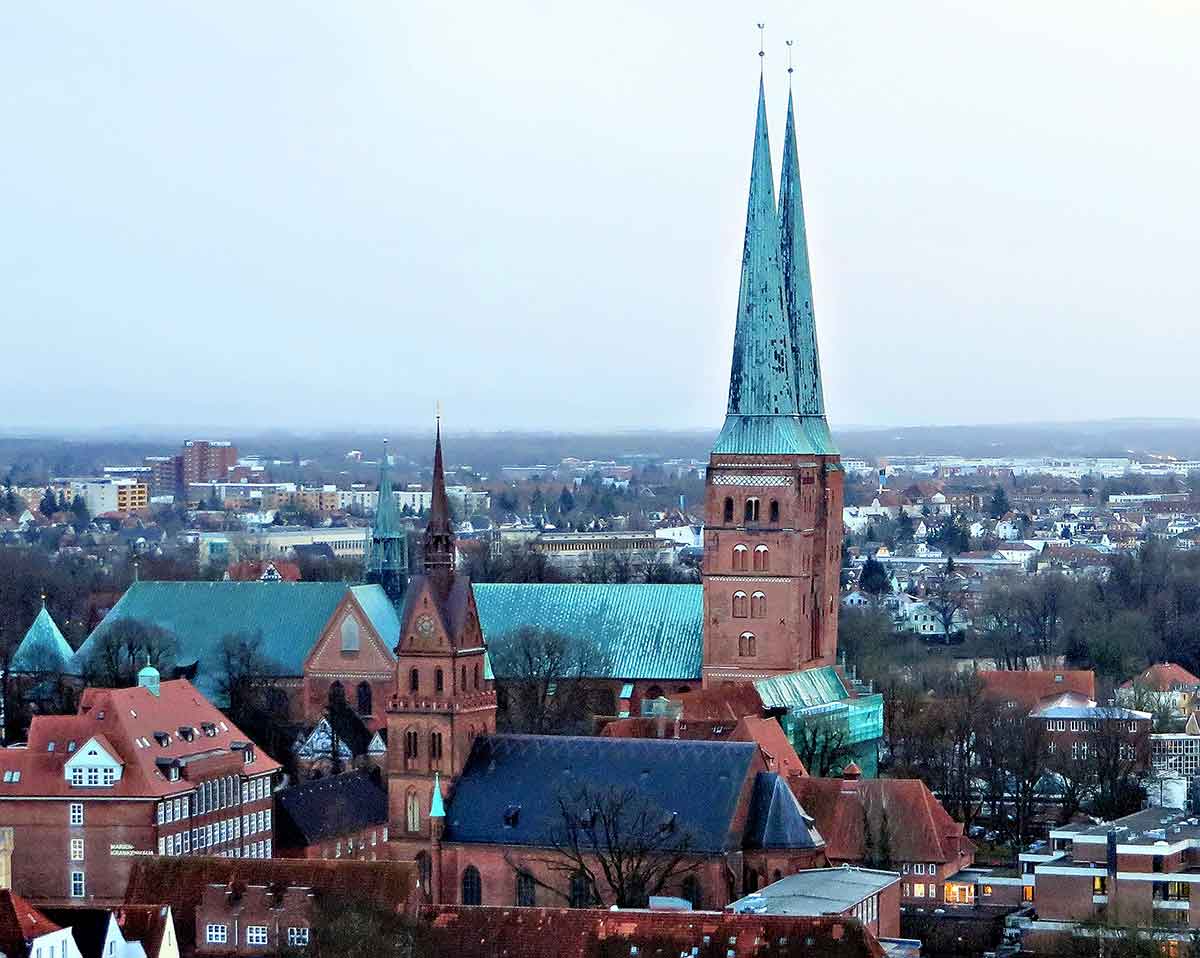 Lübeck’s Sacred Heart church in front, with the 13th-century Lutheran “Dom” (or cathedral) towering behind it. Sacred Heart was where the three martyred priests served. (Photo: Günther Simmermacher)

The next day, at a confirmation service, Rev Stellbrink preached a sermon in which he characterised the air raid as God’s punishment. In the back pew, a Gestapo spy was busy making notes. He didn’t need to: the whole city was talking about the sermon.

After a Gestapo raid on his home, Rev Stellbrink knew that his arrest was imminent. On April 7 he cycled to the Gestapo headquarters, located in the old arsenal building in the shadow of the now severely damaged cathedral, to find out what they had on him. He never came home. Later, his family was told to collect his bicycle.

The three priests, two parish employees and 16 lay parishioners were arrested in the weeks after. Kept in solitary confinement, the clerics were accused of treason, including illegally listening to the BBC (which the Nazis knew to be true, thanks to a Gestapo informant).

Their case was important to the Nazis. While the regime had killed many Catholic priests already (but not yet any Protestant clergy), here they had a chance to discourage any notions of cooperation across sectarian lines.

Moreover, the trial of the three priests from Lübeck would serve as a prosecution by proxy of Bishop von Galen, who was considered untouchable.

There were 1,600 political executions that year, but in this case even Adolf Hitler involved himself. The Führer himself formulated the charges and instructed prosecutors on their strategy. He also ordered that the prosecution omit any mention of Bishop von Galen. 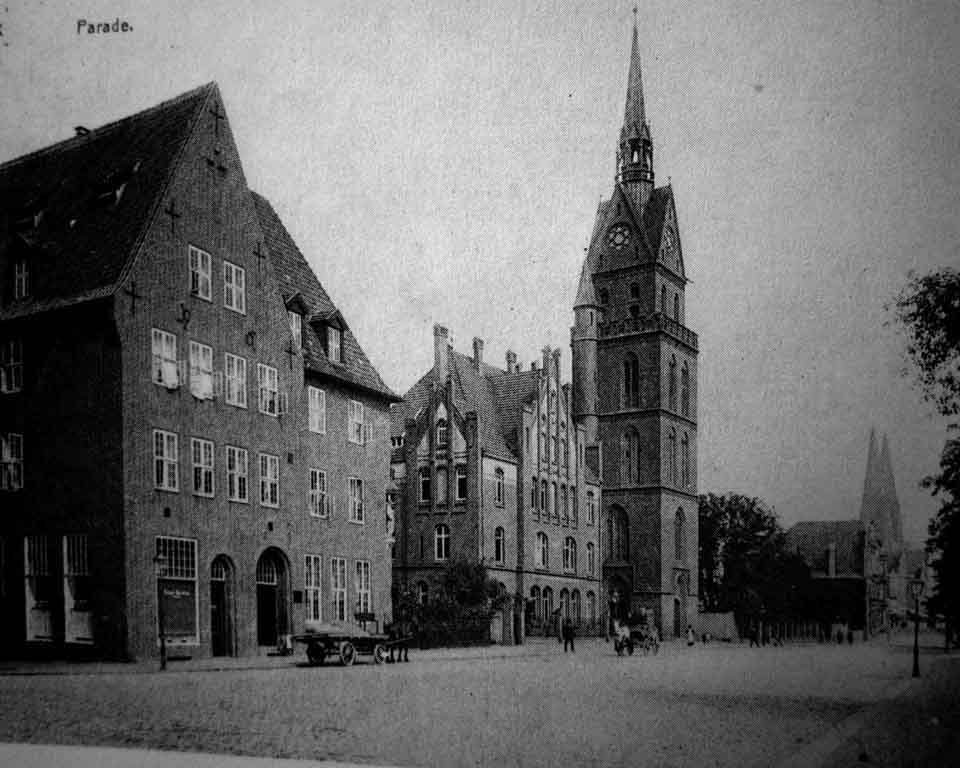 Lübeck’s Sacred Heart Church (or Herz-Jesu Kirche) in 1890, shortly after it was built. The church was served by the three executed Catholic priests.

Send in the Hanging Judge

A hanging judge was dispatched to Lübeck for a showtrial. In the morning of June 23, 1943, Rev Stellbrink was tried and swiftly sentenced to death.

In his verdict, the judge castigated Rev Stellbrink: “As a Lutheran cleric, you did not hesitate to join forces with representatives of the anti-Protestant Catholic Church in the fight against the state.” It was an involuntary admission of the case’s ecumenical dimension.

The Catholic priests were sentenced to death in the afternoon. Surprisingly, the 16 lay accused were exonerated, but the two parish employees were sentenced to jail terms. As he was led away, Fr Prassek exclaimed: “At last this nonsense has come to an end.”

Propaganda minister Joseph Goebbels was pleased with the outcome. He wrote in his diary: “I urge that the death sentences will in fact be carried out.” His wish would be granted.

The four men were transported to Hamburg where they were held until their execution, for which no date was set.

In the afternoon of November 10 — the day before the papal nuncio was going to communicate Pope Pius XII’s plea for clemency — the four condemned men were told that they would be executed that evening at  18:00.

They were given pen and paper, and told to write their farewell letters. In those letters, all four were upbeat, approaching their death with serenity and even joy.

Rev Stellbrink wrote to his wife: “Now all the waiting has come to an end; the way ahead is clearly laid out, and for us Christians the destination is well known. How often I talked about it in my sermons, and now it soon will be accomplished.”

And to his family, he wrote: “Tonight will be the time when I will be allowed to die. I am so happy, I can hardly express how happy. God is so good to have given me several lovely years in which to be his priest. Do not be sad! What is waiting for me is joy and good fortune, with which all the happiness and good fortune here on earth cannot compare.”

Virtually taunting his executioners, he asked: “Who can oppress one who dies?”

None of the letters were passed on. The Nazis were so angered by their serene tone, by that defiant acceptance of their cruel fate, that they withheld them from the men’s families and bishop. And to release them would have allowed for these clerics to be regarded as martyrs.

Written by men with no temporal power, these letters testify to their victory in Christ over their executioners. And the regime which put everything into controlling the minds of its subjects was not going to disseminate that subversion of their supremacy.

For six decades the letters did not exist. Until in 2004, the historian Prof Peter Voswinckel found them in dusty archives. At least Rev Stellbrink’s surviving daughter had the solace of reading her father’s final words, more than 60 years after his death.

The Stellbrink family did, however, receive another letter soon after that November 10, 1943: an itemised bill for the pastor’s execution. The family was forbidden to mourn in public, even to the point of being told not to wear black clothes.

The family of Rev Stellbrink received no support from the Lutheran Church, which rehabilitated him only 50 years later, when it noted its “pain and shame” at the disgraceful treatment of the heroic pastor. 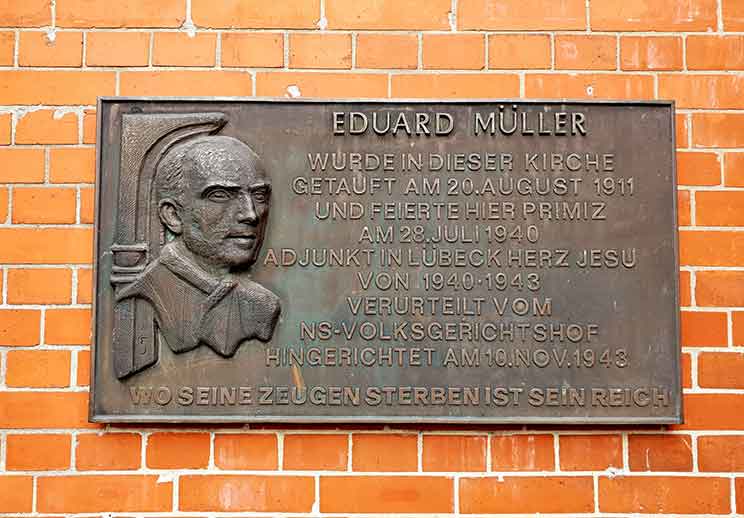 A plaque at St Vicelin’s church in the northern city of Neumünster remembers the martyr Bl Eduard Müller, a son of that parish
before he moved to Lübeck. (Photo: Günther Simmermacher)

Frs Prassek, Müller and Lange, on the other hand, were immediately venerated as martyrs in the local Catholic Church. The day after their execution, a memorial service was held in Sacred Heart church. Even though it was billed as being for all deceased clergy, the grieving congregation knew exactly why they were there.

The three priests were beatified in 2011 in Lübeck’s Sacred Heart church, with Rev Stellbrink being honoured in a special way.

A year earlier, Pope Benedict told the German ambassador to the Holy See: “The attested friendship of [the martyrs of Lübeck] is an impressive testimony of the ecumenism of prayer and suffering which flourished in various places during the dark period of Nazi terror. We can look to these witnesses as luminous indicators for our common ecumenical journey.”

The blood of these four friends, commingled on the floor of a Nazi execution chamber 75 years ago, was the seed for the growth of ecumenical cooperation in Lübeck, giving an example of friendship across sectarian lines to all of Germany and all of the Christian Church.