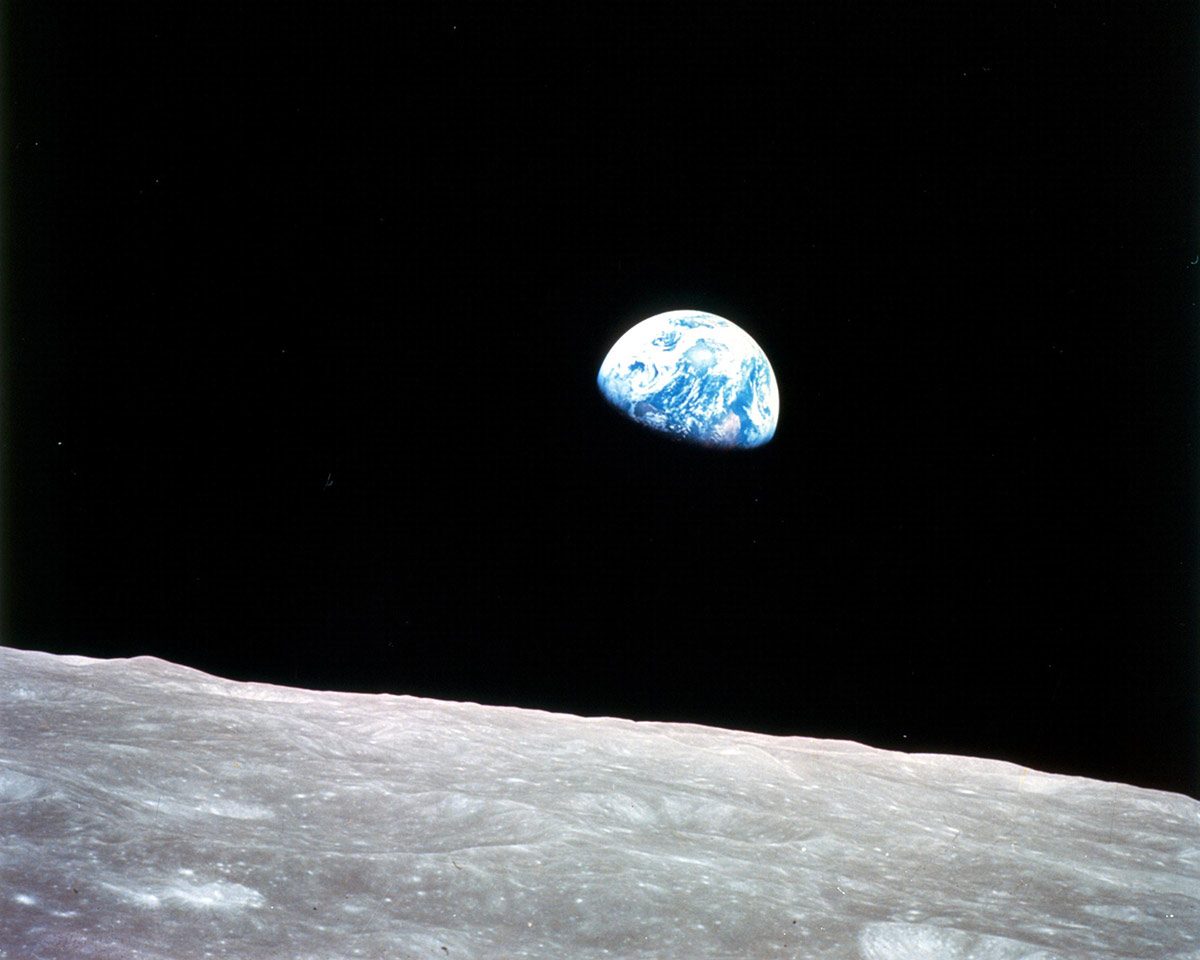 Fifty years ago on Christmas Eve (Dec. 24, 1968) the crew of Apollo 8  entered lunar orbit and began circling the moon – the first time in history for humans to visit another world.

That evening the crew’s astronauts Bill Anders, Jim Lovell and Frank Borman transmitted a live television broadcast including spectacular pictures of the moon just 60 miles below them, and of the Earth – a quarter of a million miles away.

In a most fitting conclusion to the broadcast, the astronauts shared a biblical reading of the first 10 verses of the creation account in the book of Genesis.

Anders started by inspiringly saying “We are now approaching lunar sunrise, and for all the people back on Earth, the crew of Apollo 8 has a message that we would like to send you:  ‘In the beginning God created the heaven and the earth. And the earth was without form, and void; and darkness was upon the face of the deep. And the Spirit of God moved upon the face of the waters. And God said, Let there be light: and there was light.”

Immediately after reading from Genesis, Borman said, “And from the crew of Apollo 8, we close with good night, good luck, a Merry Christmas – and God bless all of you, all of you on the good Earth.”

But in 1968, the good Earth, and countless good people on it, were suffering from various evils. The bloody Vietnam War, the brutal Soviet crushing of the Prague uprising, the assassinations of Robert Kennedy and Rev. Martin Luther King, Jr. and race riots throughout the U.S. were among the critical ills sickening our good Earth.

But humanity’s first manned step toward the heavenly bodies gave 1968, and all of us living on the good Earth that year, an astronomical boost. And the famous “Earthrise,” photographically captured by Anders, offered humanity a fresh heavenly perspective of how we might better view our earthly home.

Give yourself a wonderful Christmas gift. Click onto the following NASA link and meditate on the awesome “Earthrise” photo. And then with an open mind and heart prayerfully listen to Apollo 8’s Christmas Eve 1968 message .

Anders said that despite all the training and preparation for an exploration of the moon, the astronauts ended up discovering the Earth.

Creator God, open our eyes, ears, minds, hearts and souls to discover afresh this planet we all share in common. Help us to discover its magnificent beauty and gentle fragility. And move us to cherish it as faithful stewards. Help us to discover with justice, compassion and love each human being on it – especially the poor and vulnerable. And help us to discover your way – the only way – to bring heavenly peace upon our Earth home.

On Christmas Day, with a view of the distant Earth from above the moon,  Apollo 8 astronaut Frank Borman offered this deeply inspiring prayer. Let’s pray it together: “Give us, O God, the vision which can see thy love in the world in spite of human failure. Give us the faith to trust the goodness in spite of our ignorance and weakness. Give us the knowledge that we may continue to pray with understanding hearts, and show us what each one of us can do to set forth the coming of the day of universal peace. Amen.”

A Wonderful Christmas Gift for your Mother