A Pop Classic Was Born in a Church 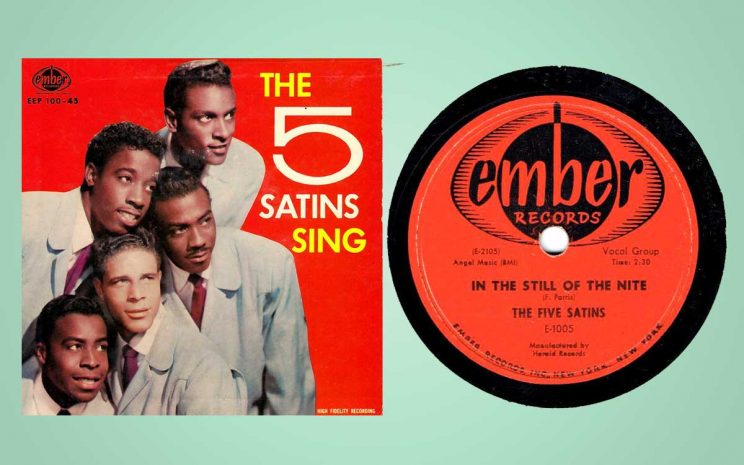 The four Five Satins, plus a token Satin to make up numbers, on the cover of their debut LP in 1957.

A great pop classic of the 1950s was recorded in the basement of a Catholic church, as GÜNTHER SIMMERMACHER explains.

One of the songs that gave the 1950s musical genre “doo wop” its name was recorded in the basement of a Catholic church. This, I’m sure, was mentioned at the funeral of Vinny Mazzetta at St Bernadette’s church in New Haven, Connecticut, in October.

Mazzetta was an altar server at the church in 1956 when he arranged for an unknown vocal band named The Five Satins to cut two songs in the church’s basement. One of them was “In The Still Of The Nite” — and Mazzetta played the saxophone on it.

The song has made history: it’s the only record to have entered the US charts with the same version three times. In 1987 it featured on the soundtrack of the movie Dirty Dancing; in 1992 a cover version of the song was a hit for Boyz II Men.

In early 1956, all that was beyond the dreams of the teenage African-American singer Fred Parris, who had formed the group. Although it had only four singers, he gave the group the numerically misleading name Five Satins, since vocal groups that enumerated five members — The “5” Royales, The Five Crowns — were coming into fashion, while the Four Aces and Four Coins were on their way out.

Written for An Ex-Girlfriend

As a US army recruit, Parris was travelling between New Haven and his army base in Philadelphia when he wrote “In The Still Of The Nite” for a former girlfriend whom he was hoping to win back. He failed in that endeavour — she soon moved to California and Parris never saw her again—but he knew he had a good song in his hands.

And so did manager Marty Kugell, who ran his own small label, Standord Records, which had released The Five Satins’ debut single in 1955. But Kugell had no studio in which to cut his clients’ new record. A first attempt failed when traffic noise polluted the recording.

A solution arrived when Kugell bumped into his old high school pal Vinny Mazzetta. Remembering that the basement of St Bernadette’s church was secluded from traffic, he asked Mazzetta — himself still a teenager — to use his connections as an altar server there to secure the premise as a makeshift recording studio.

Mazzetta duly asked the parish priest, Fr Charles Hewitt, if the basement could be used for a recording session after Sunday Mass. The priest agreed, with the casual response, “Sure, why not?” And that was not to be taken for granted: in 1956 the new-fangled rock & roll music which the young people listened to still attracted moral resistance from older people, including many a parish priest.

For Mazzetta, Fr Hewitt’s response was rooted in Catholicism. “That’s right in line with the Catholic philosophy of giving and of charity,” he told the New Haven newspaper The Courant 60 years later.

In the Basement of St Bernadette’s

And so, on February 19, 1956, the four Five Satins, four amateur musicians, a recording engineer, and Kugell as producer gathered in the basement of St Bernadette’s church to record “In The Still Of The Nite”, and another track, “The Jones Girl” (which was originally the A-side).

There was no bass, so a low-tuned cello was used instead. The piano was the property of St Bernadette’s. Mazzetta played the saxophone.

“I wasn’t doing much on Sunday afternoons in those days, so I said, ‘Sure, I’ll play for you’,” he later recalled. “Never in a million years did I think it’d be such a hit.”

The song quickly picked up fans, even if a local radio station responded to listeners’ requests by playing Ella Fitzgerald’s version of “In The Still Of The Night”—by Cole Porter.

By the time The Five Satins’ song was a hit, Fred Parris and fellow army recruit Al Denby had been shipped off to Japan, so other Satins were performing Parris’ song. One day, Parris heard it on the US Army radio station in Japan.

Parris reclaimed The Satins in the 1960s, and has been performing with various iterations of it ever since, even for Richard Nixon on his 1968 election campaign and in the White House.

Mazzetta never turned professional, but for much of the rest of his life performed with amateur bands for fun, while running a grocery store for a living. He remained at St Bernadette’s his whole life, serving as an usher for many years and being a Knight of Columbus (the US version of our Knights of da Gama).

On October 19 Mazzetta’s Requiem Mass was celebrated in St Bernadette’s church — above the basement where on that Sunday in the winter of 1956 he helped make rock & roll history.