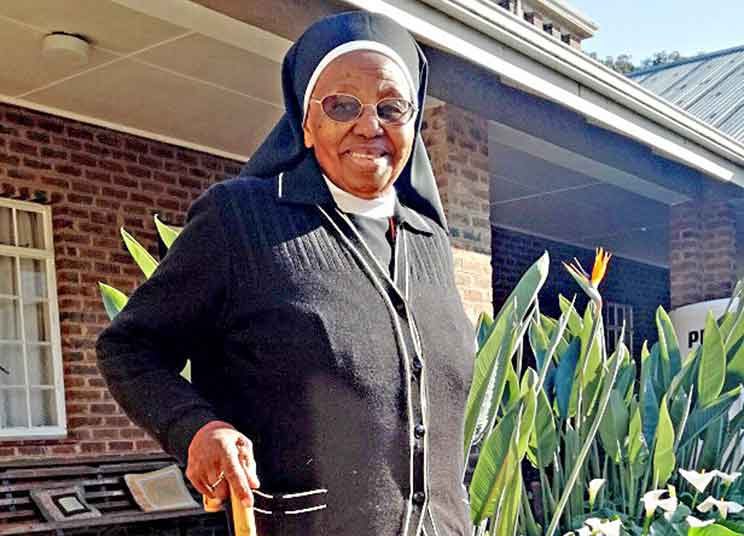 Precious Blood Sister Bernadette Mtimkulu will turn 100 years old on November 26. She entered the congregation’s novitiate in 1944, and served her working life as a teacher. (Photo: Sr Bettina-Maria Berens CPS)

Sr Bernadette Mtimkulu CPS of Mthatha has been a professed nun for almost 70 years and will turn 100 on November 26. Sr Mary Florence Sitwala cps looks at Sr Bernadette’s long life of service.

On November 26, Sr Bernadette Mtimkulu will become the first African Missionary Sister of the Precious Blood to reach the age of 100.

Sr Bernadette, who will celebrate her 70th jubilee in religious vows on January 6, is still clear in her mind. She walks about mostly unaided, and her eyesight is perfect as she sits in her working room doing embroidery on pieces of cloth.

She says her favourite pope is Pius XII, of whom she requested three favours, two of which, she says, have been granted. The last favour is yet to be granted at the end of her life.

Sr Bernadette Mtimkulu was born on November 26, 1918. Her grandfather on her mother’s side was a Mosotho of the Bafokeng tribe.

When her grandfather was still a boy, herding cattle and flocks of sheep on the mountain sides at Metebong, he and other boys with all their beasts were taken by a Zulu army to Zululand. That was during Shaka’s time.

Thus, he grew up in the Ixobho area called KwaNokweja. He eventually married and the couple was graced with three children, including Tharsilla, who would become Sr Bernadette’s mother.

The family came to live near Lourdes mission in Umzimkulu district. This is where Tharsilla married Julius Mtimkulu, with Fr Bonaventure Feurer officiating.

They moved to Julius’ home in Makhoba’s location in Kokstad, near Mount Currie, where Maria Telgte mission still stands.

Sr Bernadette remembers Makhoba’s as a peaceful, treasured location which was very productive.

Long before Sr Bernadette was born, Julius had gradually become a catechist under Fr Damascus. As he worked in the mission, he was first a guide in the location and a companion to the priest. Later, he rose to become a full-fledged catechist.

“I am not boasting, to say that my father was a gentle, kind, loving, polite, understanding, just and a generous man,” Sr Bernadette recalls. He won many people to the Catholic Church in places he went to.

From these small beginnings where her father started now stand big church buildings. 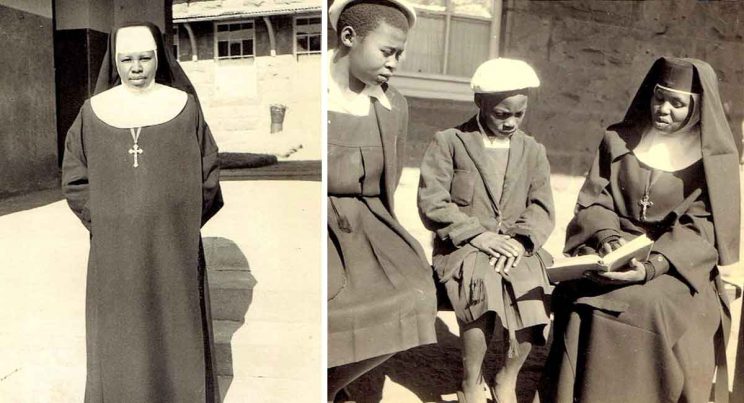 Two photos from Sr Bernadette Mtimkulu’s personal album show the centenarian nun in her younger days. In the photo on the right she is seen giving religious instruction.

Maria Telgte was Sr Bernadette’s first school. The first principal of the school was Sr Bona Kutzmann. The pupils had to rise as early as 5am as classes started at 7:00. Sr Bernadette’s mother would accompany them through the fields and then watched them until they disappeared to the other side of the hill.

For little Bernadette, Makhoba’s location and Maria Telgte were the whole world. She never thought that there would be a better place or country than these.

When classes were over, going back home westwards along the mountain under which the mission is built, the children would linger, picking the most delicious purple wild berries. “Ï have never since seen the like anywhere,” Sr Bernadette said.

In order to escape punishment at home for being late, the children would pick the best berries and fill their little provision tins. At home, they would be asked why they had arrived so late from school.

“We would then be asked to open our mouths in order to check for purple tongues that had been feasting on those purple berries,” Sr Bernadette recalled. To that, little Bernadette would produce her provision tin full of berries. Her pacified mother would make the most delicious jam from her berries.

As political changes came in force, Sr Bernadette recalled, they could no longer go back to Makhoba’s location because the people had been driven away towards Matatiele, Mzongwana and other places.

This was a most difficult era for many people who could not comprehend why they had to be driven out of their homes. Those who refused to move out, were shot dead. And so the large family was scattered all over.

Eventually, they found a new home at Lourdes, in Umzimkulu district. “My mother could not go back to our old home to gather her property,” Sr Bernadette remembers

There were many jealousies and much greed. Some uncles deprived her mother of all her father’s cattle, horses, goats and cultivated land. This resulted in poverty. Their house was broken into and furniture stolen. Window frames, door frames and crockery were all stolen. Thus, they were obliged to begin a new life from scratch.

In 1938, the family built their own home on a plot at Lourdes. The cost of this plot added to the family’s debt.

But just as it looked like Bernadette’s education would come to an end because  her sickly mother could not afford to pay her fees, God touched the heart of Fr Henry Jacob, who had been transferred from Mariannhill to Lourdes. He offered to pay her fees.

In 1938, Bernadette joined the first intake of students at the newly-opened secondary school at Lourdes. In 1940, when Bernadette had completed her Junior Certificate, she was ready to enter the  Teachers’ Training College at Mariazell. She completed her course in 1942.

In 1943, because of the prospects of entering the convent by the end 1944, she was transferred to the Industrial School to teach there—under the care of Precious Blood Sister Imeldis Mülder, her future superior-general.

And so, prior to entering the convent, Bernadette was able to pay off the debt of the farm which she had bought for her mother. Unfortunately, her mother passed away on January 14, 1944.

In 1944, Sr Bernadette entered the novitiate of the Missionary Sisters of the Precious Blood, at St Patrick’s, about 10km from Mthatha. Mother Germelina soon sent Sr Bernadette to Mariannhill to complete her matric.

In 1947, she and other young women were received as novices. She was handed the constitutions of the Missionary Sisters of the Precious Blood at the altar when she became a novice, and this moulded her life as a full-fledged missionary until she will sing her last Nunc Dimittis.

On January 6, 1949, Sr Bernadette made her first profession. Soon after, she was transferred to Mariazell Teachers’ Training College. There she was the first African Sister among the white Sisters. She embraced their lifestyle, knowing that she had entered an international congregation.

She recalled that the congregation’s founder, Abbot Franz Pfanner, detested discrimination. “So I picked up courage and ventured into the unknown with a firm hope that the transfer to that place was by God’s order.”

Apart from being a classroom teacher, she also directed the Girl Guides and Scouts.

In 1962, she became principal at St Michael’s mission in Indonyane, and two years later was transferred to St Francis Training College, Mariannhill.

The same year, she passed her examination, in Afrikaans.

In 1970, under obedience, she was transferred back to Mariazell, and then served as principal at St Michael’s, in Cwele mission.

Sr Bernadette retired from teaching in 1986 and handed over the reins to a younger Sister.

“I want to thank God, despite the many difficulties and joys of this long journey, that from my first “Yes”, I learnt that one receives many blessings from God. This I can say with certainty,” Sr Bernadette said.

“How many blessings did I receive from my loving God on the work I was doing? As I look back, I realise that God was always on my side. I received many blessings, not only good results, but many converts and nuns of my area who later followed me to enter the convent,” she said.

“Likewise, I want to thank all the people who moulded me into what I am today. I am grateful to all my superiors who afforded me to advance in education, so I could give my students quality education,” she said.

“When I take stock of my life, I discover so many manifestations of love and care of God for my family.  Difficulties were there in plenty, but also good happenings which make me smile when I remember them,” Sr Bernadette recalled.