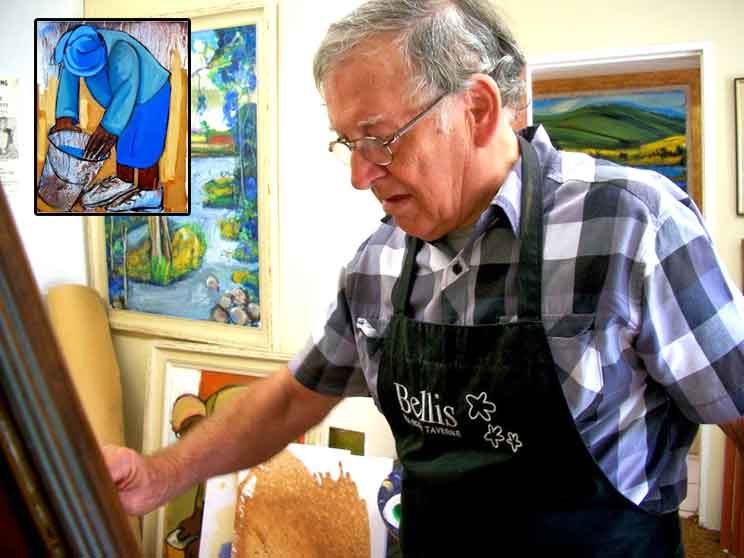 Artist-priest Fr Wilfried Joye OMI, who has died in Belgium, at work in his studio. (Inset) One of Fr Joye’s paintings, entitled “I am looking into life…”

A well-known and prolific artist and Oblate of Mary Immaculate priest who has died at 79 was recalled as a man who used most of the income from his paintings to build churches and support programmes in Klerksdorp diocese.

His paintings have been decorating the walls of Oblate communities and of art lovers for many years, and have been seen in numerous exhibitions in South Africa and overseas.

Born on July 4, 1939, into a working class family in Dadizele, Belgium, Fr Joye completed his humanity studies at the Oblate College in Warege, and made his first vows in 1959.

He was ordained to the priesthood in 1964 and two years later was appointed to the prefecture of the Western Transvaal (since 1978 the diocese of Klerksdorp).

After studying Setswana, he worked in the districts of Wolmaransstad, Klerksdorp and Potchefstroom, where he remained for all his years in South Africa. Fr Joye loved working in the rural areas and was very close to the people.

He also served as chaplain at the University of Potchefstroom for a few years.

Fr Joye was very involved with the Chiro Youth Movement in the diocese, of which he was a great animator.

From the beginning of his stay in South Africa, he spent a lot of his free time painting. He was inspired by the people he ministered to, and loved the rural and township life.

Many of his paintings were inspired by these surroundings, as well as by the psalms and the parables.

“I love to paint the farm people of South Africa. By nature they are very religious and very good people,” Fr Joye said in a 2003 interview. “Each time I paint, I hang myself on the wall,” he said.

The Belgian priest’s great gift of drawing, especially charcoal illustrations, was already apparent in the scholasticate.

While on a sabbatical, he studied iconography in Paris. “To me, an icon is painted theology. As you grow as a person, painting becomes an expression of your soul,” he said.

Fr Joye’s icons have oval heads, small mouths, and open, rounded eyes. “Small mouths show an attitude of being overwhelmed by the reality of truth,” he said in the 2003 interview.

“Big, open eyes are an expression of a seeing person, somebody who lives in the truth and understands the truth. Eyes are very important to me because they show an atmosphere of silence, wonder and mystery. That’s how I feel reality is,” he explained.

One of his icons hangs today in his previous parish church of St Michael’s in Potchefstroom. Others are displayed in places such as Potchefstroom University for Christian Higher Education and Good Shepherd Centre in Pretoria.

Fr Joye’s paintings interpreting the 15 traditional mysteries of the Rosary hang in the basilica in Dadizele, his hometown.

He published a book of art and poetry with Bernie Mullen, who was impressed with the profound contemplative silence she experienced in Fr Joye’s paintings and penned the inspiring poetry to accompany it.

A second book is almost ready for publication.

In the new book’s tribute, Ms Mullen writes that Fr Joye’s style speaks of traditional icon artistry; the influence of his art mentor and teacher Egon Sendler, in that the figures have small mouths, large and usually wide-open eyes, straight-lined and small noses, and very delicate, gesturing hands.

As icons do, Ms Mullen writes, they draw the observer into contemplation and deeply prayerful attentiveness.

Fr Joye himself was a joyful person, a dedicated Oblate of Mary Immaculate priest, and a friend to everyone, said Oblate provincial Fr Neil Frank.

He refused further chemotherapy and embraced his death with deep faith and contemplative peace, Fr Frank said, adding that he was truly happy with his vocation and missionary life in South Africa.

Fr Joye’s Requiem was celebrated in the Oblate chapel in De Panne, Belgium, with memorial Masses held throughout the Klerksdorp diocese, including at his old parish, St Michael’s in Potchefstroom.