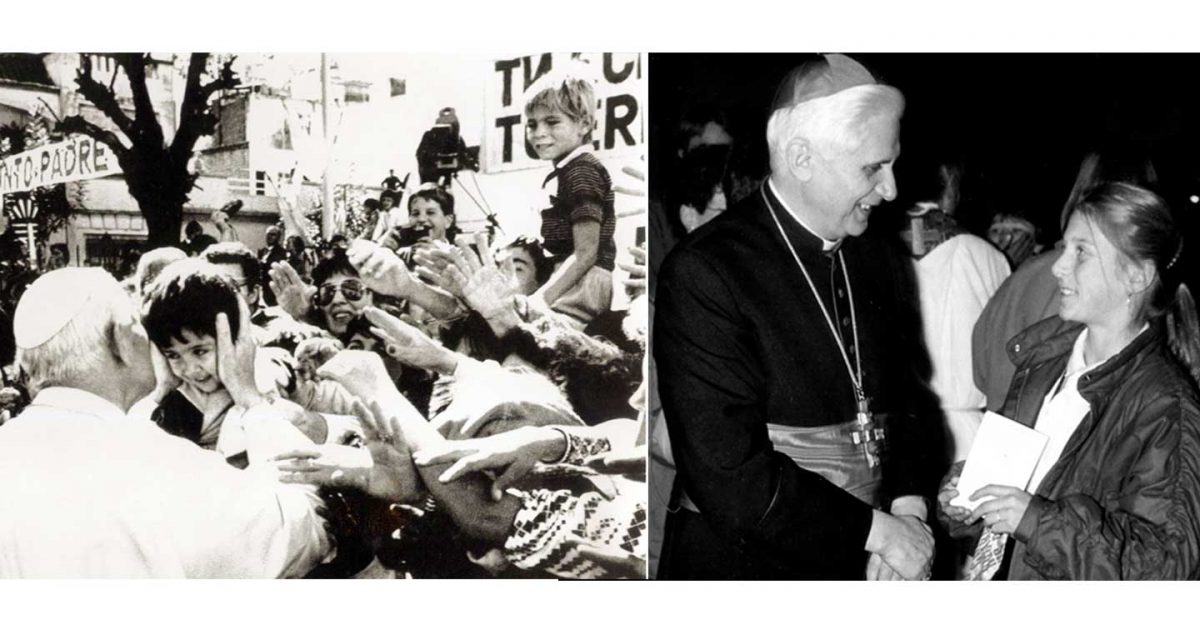 On January 22, 2019, World Youth Day will be held in Panama City. Over the next few weeks, Günther SImmermacher will look back at all the WYDs that came before, since 1984.

In January, the international World Youth Day will be held in Panama City, the first time the event will be hosted in Central America. In preparation for this massive event, let’s look back at former World Youth Days.

While the Church celebrates a Youth Day every year on a diocesan level on Palm Sunday, World Youth Day is a bit like the Olympics of our faith: a time every two or three years when the Catholic youth (and non-Catholics, who are also invited) comes together from all over the globe.

The World Youth Day event was brought to life by Pope John Paul II, who based it on activities he ran as a young priest in Poland.

Some of the youth that will come to Panama City in July may well be the children of participants in the inaugural Youth Day.

The first event had no scriptural theme yet: it just commemorated the Holy Year of Redemption. It also had no anthem, and was a youth meeting rather than the fully-packed event we have come to know since.

Pope John Paul II, in a speech in Milan, simply called the youth to come to Rome “for a prayer meeting” and “for sharing, conversion and joy”. And they came, in numbers.

Some people don’t count the Rome event as a proper WYD. Still, it brought together more than 300000 young people who took part in a Mass in St Peter’s Square on April 15 that year.

And it inaugurated the 3,8m-high Youth Cross, which makes its worldwide journey before it comes to the host city.

The first Youth Day had been a success. With the United Nations having declared 1985 a “Year of the Youth”, Pope John Paul issued an invitation to the world’s youth to come to Rome on Palm Sunday to “celebrate, proclaim, bear witness together ‘that Christ is our peace’”.

And so the theme for the second WYD was “You are called upon to build peace”.

It was also the first Youth Day to have its own anthem, “Resta qui com noi” by the group Gen Rosso.

This time 450000 people attended the Youth Day Mass in St Peter’s Square. This impressed the pope who in December that year formally proclaimed that  a World Youth Day would be held regularly.

The movies: The Falcon and the Snowman; Witness; The Breakfast Club.

On TV: Newhart; The A-Team; Cheers. 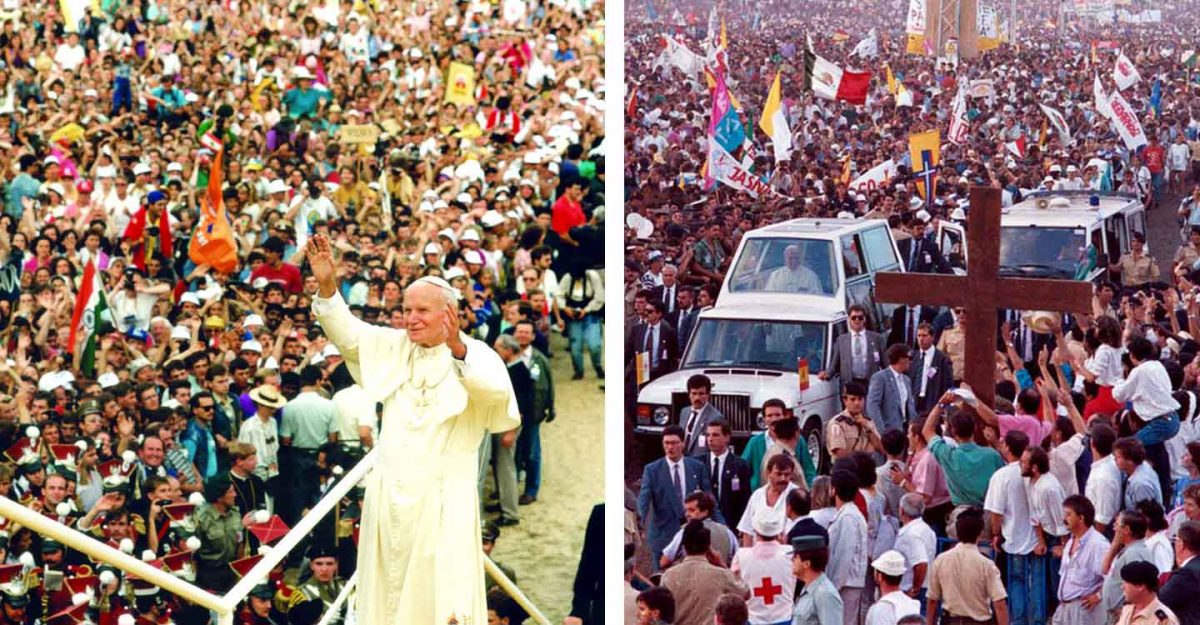 Left: Pope John Paul II arrives for World Youth Day in Santiago de Compostela in 1989, and (right) greets pilgrims at Czechostowa in his native Poland in 1991.

The first proper, formally proclaimed World Youth Day took place in Buenos Aires, Argentina—a signal by the globetrotter John Paul II that this was intended to be a truly global event.

In keeping with the original idea, the WYD Mass was celebrated on Palm Sunday, April 12, with activities and the vigil the day before.

Several dioceses in South Africa tied local celebrations to the event in Argentina.

In his message for the festival, Pope John Paul said: “The construction of a civilisation of love demands vigorous and constant strengthening, disposed to sacrifice and desiring to open new roads to the social life together, surpassing divisions and conflicting materialism.

“This is a specific responsibility of today’s young people that they will have towards the men and the women of tomorrow.”

Much as the WYD meant a lot to the pope, when he reflected on his round-trip, he said his experiences in Chile had been the highlight. And well he might: many historians say that the pope’s visit was a key factor in that country’s brutal dictator, Augusto Pinochet, being forced to introduce democracy there two years later.

Music: “Respectable” by Mel & Kim; “Scatterlings of Africa” by Johnny Clegg & Savuka; “With Or Without You” by U2.

For World Youth Days, the accent is on the virtuous practice of pilgrimage, a journey that is not only physical but also spiritual.

And so 1989 WYD was held at one of Europe’s most ancient pilgrimage shriness— Santiago de Compostela, where the relics of the apostle James are said be kept (Santiago is Spanish for St James).

The next WYD, in 1991, would also be held at a great site of pilgrimage: the Marian shrine of Czestochowa in Poland. The idea of WYD as a pilgrimage itself certainly became formally entrenched afterwards.

For Pope John Paul II, every foreign trip was a pilgrimage. He used to call his travels “pilgrimages to the heart of the Church”.

When he invited the world’s youth to meet in Denver in the United States for WYD 1993, he said: “My visit to Denver will be truly a pilgrimage which I, along with so many young men and women, am preparing for through reflection, prayer and penance.” It is fair to say that before that, nobody had ever thought of a trip to Denver as a pilgrimage—and possibly nobody has done so since.

In 1989, however, the world’s Catholic youth gathered in northern Spain, at a place that has attracted huge numbers of pilgrims, before and after (and is fashionable these days even among non-Christians as the destination of the Camino walk).

The theme for the fourth international WYD was from John 14:6: “I am the Way, the Truth and the Life”, a reminder to the youth of the world that Christ always leads to the Father.

Pope John Paul called on the youth: “For all of you it must therefore become the day of a new, a more mature and a deeper discovery of Christ in your life.”

For the first time, the WYD event was not held around Palm Sunday, but from August 19-21.

Pope John Paul travelled to Spain, presiding over prayers before St James’ tomb, over a prayer service for the disabled and infirm, and, of course, over the night vigil and the closing Mass next day, both on the Monte del Gozo, with about 400000 in attendance.

And at the vigil, Pope John Paul let out the secret of the meaning of life: “Keep loving. Only the person who forgets self in order to give himself to others fulfils his own life and expresses to the greatest extent the value of his earthly existence.”

Music: “Special Star” by Mango Groove; “Hand On Your Heart” by Kylie Minogue; “Forever Your Girl” by Paula Abdul.

When the globe’s youth gathered in 1991, the world was not the same as it had been at the previous World Youth Day just two years earlier.

In the interim, South Africa had effectively dumped apartheid. Nelson Mandela had been freed in February 1990, and the old apartheid leaders and the liberation movements were gingerly stepping towards negotiations for a democratic solution (albeit within a climate of much terrible violence).

More seismic internationally was the sudden collapse of communism in Eastern Europe—a domino effect that started in Poland. In August 1989, when WYD was held in Spain, the communist regimes of Eastern Europe were still in charge. By August 1991, they were all gone, with even the Soviet Union communist in name only.

So this was the first time that young Catholics from the formerly communist countries, where the Church was oppressed and citizens couldn’t travel freely, were able to take part in a WYD. About 100000 did.

Altogether, an incredible number of 1,6 million participated in the event—four times as many as in 1989.

For Pope John Paul it was not his first visit to his homeland as a free country: he had travelled to Poland just two months earlier.

As mentioned previously, it was significant that the World Youth Days in 1989 and ’91 were hosted at sites of popular pilgrimage, because Pope John Paul wanted to promote the idea of WYD as a pilgrimage; and the idea of pilgrimage not as something that just older people get into but as an enriching spiritual journey—one that is devout and fun—also for young Catholics.

The theme for WYD ’91 was “You have received a spirit of sonship” (Rom 8:15). “These words,” the pope wrote in his message for WYD, “lead us into the deepest mystery of the Christian vocation: in the divine plan, we are indeed called to become sons and daughters of God in Christ, through the Holy Spirit.”

In his message, the pope also promoted the idea of evangelisation—important especially in countries where the Church had been oppressed and silenced. He asked the youth for a “commitment to evangelisation in today’s world, looking towards the year 2000”.