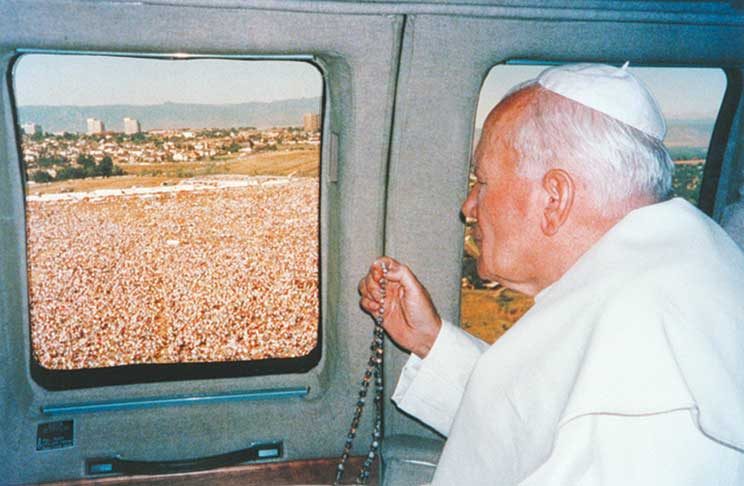 On January 22, 2019, World Youth Day will be held in Panama City. In last week’s first part of his series on past World Youth Days, GÜNTHER SIMMERMACHER looked back at the first five events. This week he recalls the WYDs of 1993, 1995 and 1997.

After the success of two tentative Youth Days in Rome in 1984 and ’85, the first proper World Youth Day (WYD) took place in Buenos Aires, Argentina, in 1987. It was a resounding success. The next two WYD were held in Europe—Spain (1989) and Poland (1991)—before it crossed the Atlantic again, to the United States.

With successive World Youth Days in Santiago de Compostela in 1989 and Czechostowa in 1991, Pope John Paul II established the notion of these gatherings as a pilgrimage. Those taking part in it were to be not just participants but pilgrims.

That point made, the next World Youth Day would be in Denver, in the US state of Colorado—a city perhaps most famous as the setting for the materialistic ’80s soap opera Dynasty.

Denver is on nobody’s list of pilgrimage destinations. But that choice made a point too: World Youth Day should be seen as a journey of faith (which is a brief but useful definition of a pilgrimage).

The choice of Denver as a host symbolised that not every pilgrimage needs a shrine as an endpoint: the people who take part in WYD, from parish teenager to Holy Father, are the physical endpoint (the real destination on any spiritual journey is, of course, the Father, the Son and the Holy Spirit).

The pope reached Denver by a pilgrimage of detours which took him first to Jamaica and Mexico.

In Denver, Pope John Paul was greeted by President Bill Clinton, who presumably was not in total agreement with a recurring theme throughout the WYD celebrations, from August 12-15: the sanctity of life.

The theme for WYD ’93 was “I came that they might have life, and have it to the full” (Jn  10:10). Jesus’ proclamation in John’s gospel can be applied to various circumstances; but in the United States, where abortion was and still is a big issue of debate, the theme also sent a potent political message.

The pope’s schedule in Denver was very busy—still, he was able to squeeze in a hike in the Rocky Mountains. The highlights, as always, were the Vigil and closing Mass the following morning, attended by 750000 in Denver’s Cherry Creek State Park. The pope addressed WYD pilgrims in English, Spanish, French and Italian.

At the vigil, he delivered a strong pro-life message, and listed a number of modern evils before asking: “Why do the consciences of young people not rebel against this situation, especially against the moral evil which flows from personal choices? Why do so many acquiesce in attitudes and behaviour which offend human dignity and disfigure the image of God in us?

“The normal thing would be for conscience to point out the mortal danger to the individual and to humanity contained in the easy acceptance of evil and sin.

“And yet, it is not always so. Is it because conscience itself is losing the ability to distinguish good from evil?”

Writing in The Southern Cross about the event, South African pilgrim Simon Donnelly (now a priest working in the Vatican) described the uninhibited yet faith-filled atmosphere in Denver during those three days.

“Downtown, Catholics were everywhere: singing, praying and waving banners. Although the weather was hot, the afternoon rain interrupted things, the organisation was ropy at times, and despite many taking over six hours to get registered, everyone was remarkably good-natured and well-behaved: no drunken, riotous sports crowds these!”

It is perhaps not surprising that a World Youth Day in the United States—the land of conspicuous profiteering and overeager lawyers—would become subject to litigation over the sale of memorabilia. 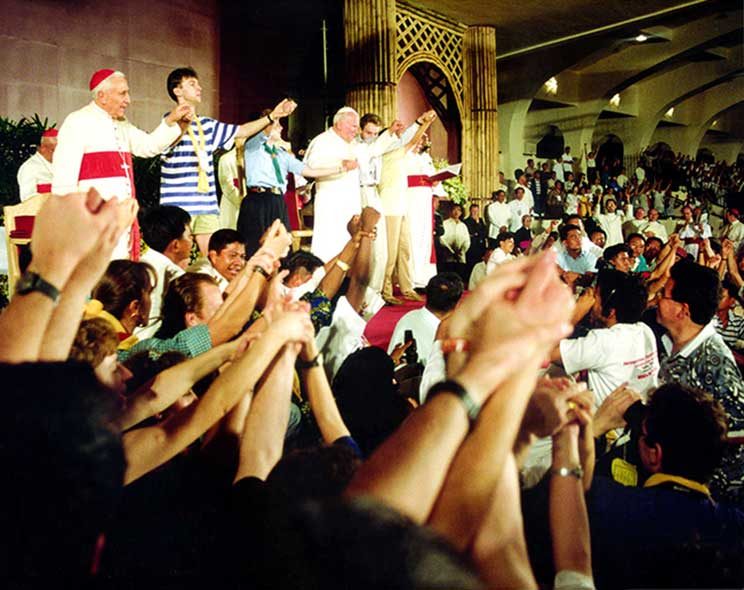 In January 1995, one of the world’s biggest-ever single gatherings took place. The headliner was not a hot rock star, but a 74-year-old man in a gown.

The previous three World Youth Days, and every WYD after 1995, had taken place in the northern hemisphere’s summer months (when schools and institutions of higher learning are closed there). The 1995 version, held in Manila in the Philippines, was held in January.

Two years earlier, three-quarters of a million participated in the WYD Mass in Denver. In Manila, at least 5 million people were at he closing Mass in the city’s Luneta Park.

Even if one takes into account that the Philippines is predominantly Catholic, that figure is staggering. Even Rome in the Jubilee Year 2000 would not nearly match Manila’s record—and Rome attracted an impressive 2 million youths. Considering that Manila is pretty far-flung on the map, 5 million is all the more an astonishing figure.

At the WYD vigil, Pope John Paul II explained why WYD is held in different countries: because “the Good News is for everyone”.

“The pilgrim cross goes from one continent to another, and young people from everywhere gather to experience together the fact that Jesus Christ is the same for everyone, and his message is always the same. In him there are no divisions, no ethnic rivalries, no social discrimination. All are brothers and sisters in the one family of God.”

There were some unsavoury rivalries at Luneta Park, as local Catholics began to jostle for space with WYD delegates occupying their allocated spaces.

WYD ’95 formed part of an extensive papal tour of Asia and Australia. In the land Down Under, Pope John Paul beatified Sr Mary MacKillop (1842-1909), who had at one point been excommunicated for “disobedience” by her bishop because of her progressive education methods and “excessive singing” (the excommunication was lifted a year later after an appeal to the pope).

Music: “(At Your Best) You Are Love” by Aaliyah; “Circle Of Life” by Elton John; “Zombie” by the Cranberries.

On TV: The X-Files; Frasier; The Nanny. 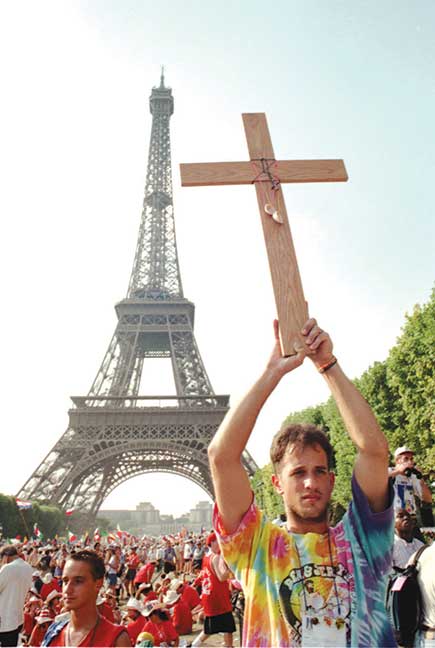 Foreign pilgrims outnumbered local representatives during the WYD ’97 celebrations in Paris, with 300000 registered participants from outside France, but only 100000 French youth.

One of the reasons for that, of course, was France’s location: a Catholic country itself, its neighbours also had strong Catholic populations.

But the pilgrims did not come just from Italy, Spain and Germany. More than 140 countries—including South Africa, with a contingent of 200 participants—were represented in Paris.

Another reason was simply that the French youth was not into the Church any longer, as the bishops of France admitted.

While Paris could not match Manila’s incredible numbers (try to fit an extra five million people into Paris!), the organisers’ expectations were still far exceeded.

They didn’t know how many above the registered 400000 pilgrims would  participate in the Saturday night vigil and closing Mass on Sunday. They reckoned around 500000 would come.

WYD ’97 saw the introduction of a new innovation: the baptism and confirmation of ten young converts—representing different continents—to Catholicism during the WYD Saturday night vigil, and the concurrent renewal of baptismal vows by the assembled world youth.

By 1997, Pope John Paul’s health was deteriorating rapidly. As he arrived for WYD, he seemed tired and frail. But, as so often, being around young people inspired the Holy Father, who became increasingly energetic, despite the hottest August weather on record.

For WYD, the French Church moved the relics of St Thérèse of Lisieux, considered a model to young people especially, from Lisieux to the basilica of Our Lady of the Victories, the church where St Thérèse used to pray on her visits to Paris.

At the end of the closing Mass, Pope John Paul announced that St Thérèse would be declared a Doctor of the Church two months later.

Adding to a theme of saints as role models for the youth, Pope John Paul during the five-day WYD event beatified Frederic Ozanam, who was 20 years old in 1833 when he co-founded the Society of St Vincent de Paul in Paris. The SVP is now represented all over the world, including South Africa.

South African pilgrims travelled to Taizé and spent time in Bayonne (where they reportedly moved the locals to tears by singing the national anthem).

At a catechism session in Paris,  youth coordinator Paul Hooper recalled at the time, an American bishop pointed to the South African delegation as a symbol of hope, three years after the first fully democratic elections.

Music: “Vulindela” by Brenda Fassie; “Mmmbop” by Hanson; “I’ll Be Missing You” by Puff Daddy.

On TV: Egoli; Mad About You; Home Improvements.