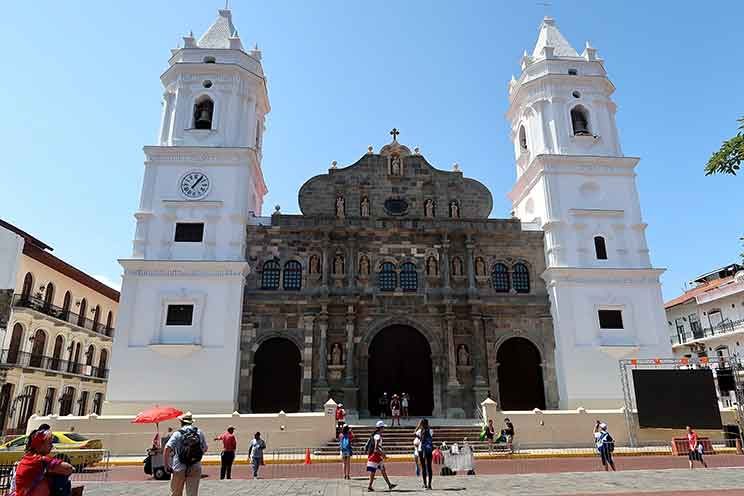 Panama City’s basilica of Our Lady of Antigua

Normal life will have returned to Panama City in the weeks since the 200000 World Youth Day pilgrims departed.

The banners welcoming the young people — every one of whom now knows that the Spanish word for welcome is “bienvenido” — have come down, but the happy memories of the Catholic youth festival will remain in this city of faith.

Aside from the posters and banners relating to JMJ—the Spanish initials for WYD—the signs of the Catholic faith are everywhere. 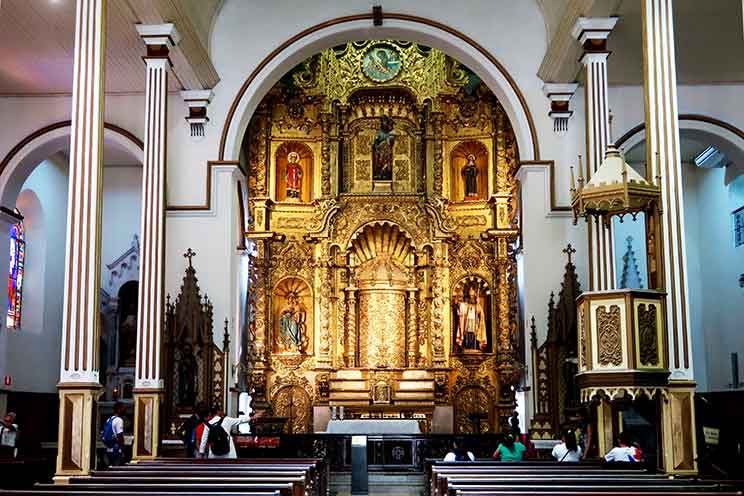 The golden altar of the church of San José.

For example, of the many taxis I had to take in this sprawling, chronically gridlocked city, about two-thirds displayed a rosary or a small statue of a saint.

It’s the sort of place where you’ll find a shrine of Our Lady outside a lively bar.

And that faith-filled sensibility is reflected in the people, who in Panama City are warm, helpful and of good cheer (except for the staff at the extortionist airport who seem to be trained in wretched insolence).

As in all traditionally Catholic cities, there are churches everywhere. In the old city, called Casco Viejo (“Old Helmet”, a geographical reference to the bay that almost encircles its shores), there are several remarkable churches dotted around the streets that flow from the cathedral.

The 18th-century basilica of Santa Maria la Antigua de Panamá is impressive. It is the seat of what is believed to be the oldest diocese in the Americas, though the first bishops served from the original site of Panama City, which we’ll come to in a couple of paragraphs time.

The locals were immensely proud when Pope Francis came to elevate their cathedral to the status of basilica.

But there’s an even more impressive church just a road away from the cathedral.

The church of San José has great story to tell about its magnificent golden altar — which is made of wood and covered with gold flakes.

That altar stood in the first church of San José, in the original settlement of Panama City, which was founded by the cruel conquistador Pedrarias Dávila 500 years ago, on August 15, 1519.

That city was a gateway for the export of American gold and silver to Spain, and a point of import of slaves from Africa. 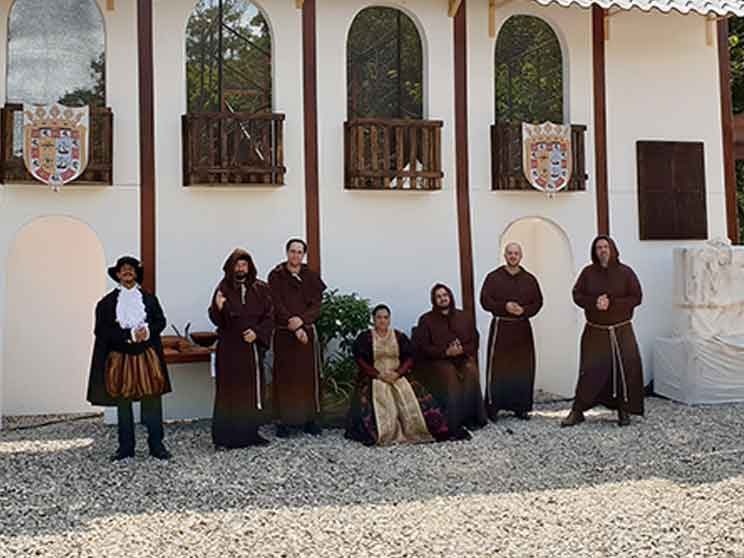 People dressed as monks in a recreation of 16th-century Panama Vieja.

The settlement of about 10000 went its prosperous slave-trading and gold-transporting ways, albeit interrupted by earthquakes, until the British buccaneer Captain John Morgan — the mass murderer celebrated with his leg-up pose on rum bottles — sacked the city and burnt it to the ground in 1671 (other sources suggest it was burnt down by the governor before Morgan could do so).

The priest at the church of San José was concerned that Morgan might find the golden altarpiece and steal it. A shrewd Jesuit, he had an idea: he painted it black. Who’d want to steal an altarpiece made of tin?

Another story has the priest bury the altar in the mud; a plausible notion since the receding sea at ebb tide leaves a plain of mud just 50m from that church.

Stripped of its ugly coat, or mud, the altar was installed in the new church of San José which was built when the new Panama City was constructed a couple of years after Morgan’s attack in a more fortifiable area 8km away; the area now called Casco Viejo.

The facade of another incinerated church was transferred from old Panama City to the new centre.

The ruins of the church of Nuestra Señora de la Merced (Our Lady of Mercy) survive among what’s left of the burnt city. On a niche above where the altar once stood, a statue of Our Lady surveys what once was an impressive church.

The walls still stand, but the façade was removed brick by brick to be reassembled at a site in the new city, where it is flanked by two stucco towers whose bells chime every 15 minutes.

The interior of the church of Our Lady of Merced is simple yet ornate. The wooden roof is held up by columns that seem rather too spindly for the job, which they nevertheless seem to perform.

There are statues everywhere. St Anthony of Padua (or, for our Portuguese friends, of Lisbon) shares a niche with St Philip Neri and Our Lady. As almost anywhere in Latin America, St Rita of Cascia is present. Our Lady of Guadalupe reigns in all her glory, while St María de Cervelló, who is a patron for shipwrecked sailors, stands there with a boat in her hand. And the statue of the Cristo Probre (The Poor Christ) is clad in extravagant vestments, which are changed periodically.

Near the sanctuary is a side altar dedicated to one of Latin America’s favourite saints: St Hedwig, or Santa Eduviges. Panamanians pray for her intercession in their housing needs. 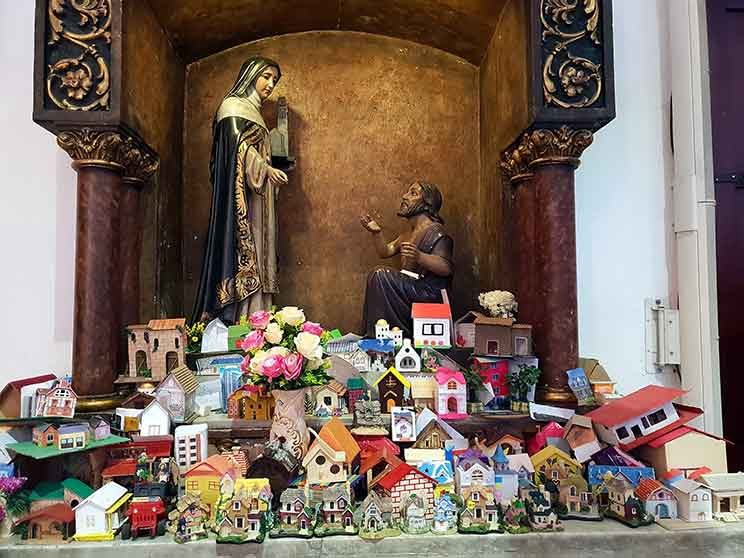 The shrine of St Hedwig in the church of Our Lady of Mercy, covered in miniature houses

Dark side of development

But housing is a sensitive issue in Panama City. Much like South Africa, Panama has a huge income-equality gap. Excessive wealth, created by the canal and the long-deregulated banking system (which has facilitated money laundering and tax evasion), stands in contrast to dismal poverty.

Panama City is proud of its impressive skyline of multi-millionaire towers, and its reputation of being “the Dubai of Latin America”. But the property development mania masks the city’s impoverished neighbourhoods.

As in many cities in the world, gentrification is a real problem in Panama City. I contributed to it, in a way, by staying in a new apartment block built in the working-class neighbourhood of Rio de Abajo.

From the balcony I looked upon modest working-class homes. A couple of years ago, homes just like these stood where I was now enjoying my panoramic views (including Pope Francis’ endless convoy coming from the airport along the Via España). Soon, these houses I gazed upon might make way for another property development. 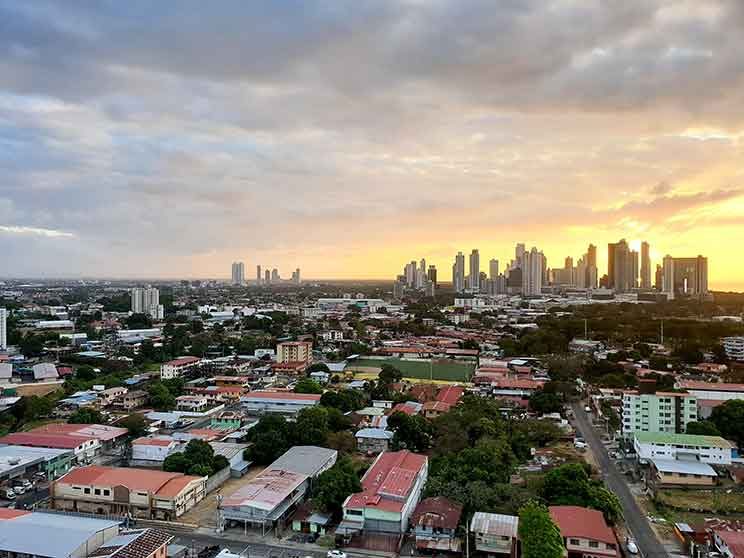 Even more alarming is the city’s plan to turn the working-class suburb adjacent to Panama Viejo, which bears the same name, into a luxury resort.

At present the residents are refusing to sell — what price a community? — but they are up against the mighty current of politicians and property developers, with all the potential for corruption that entails. Will they be able to hold out?

The neighbourhood adjacent to Casco Viejo is also battling gentrification. Tourists are earnestly warned to avoid falling victim to crime by not wandering into the suburb El Chorillo, which begins just a couple of blocks from San José church.

Casco itself used to be a rough area before it was renovated and sanitised, becoming a UNESCO World Heritage site. Now it boasts smart restaurants and hotels. As a result, El Chorillo has become targeted by property buyers and developers, slowly pushing out the neighbourhood’s community.

It is a global battle in which politicians are never on the side of the poorer people and almost always complicit in gentrification, as one sees now in Cape Town’s Bo-Kaap and Woodstock neighbourhoods. Invariably, communities and individual lives are destroyed in the process.

As in South Africa, those affected by gentrification in Panama have recourse to the ballot box (in as far as that is any help to them).

After gaining independence from Colombia in 1903, until 1989 Panama had a series of strongmen who undercut all attempts at creating a stable democracy. 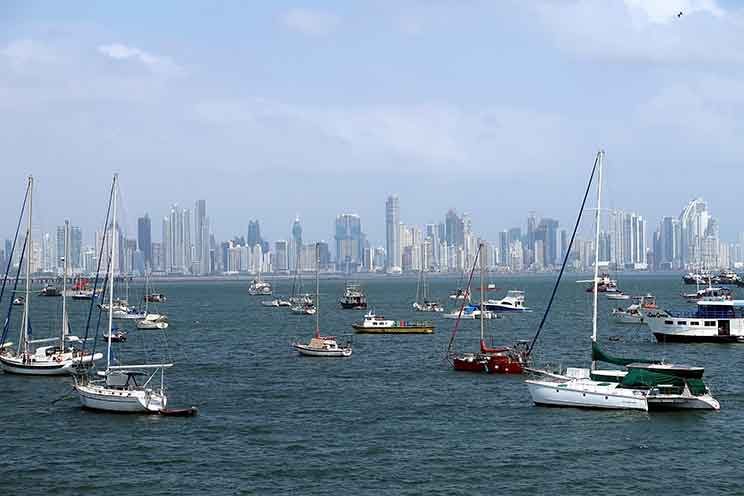 The skyline of Panama City is seen from Flamenco island which one reaches via a causeway built from the rubble of the excavations for the Panama Canal.

That changed after the bizarre Manuel Noriega was toppled by the United States in 1989 (you may remember that the US drove him out of his refuge in the Vatican nunciature by means of blasting loud rock music 24/7).

Since then, Panama has had a functioning democracy with governments changing regularly and peacefully.

Like northern neighbour Costa Rica, Panama has abolished its army. Instead, the police is all-powerful. The alarming sight of two men on a motorbike with machine guns slung on their backs is common. And these guys don’t have a great sense of humour, if the resentment one of my more peculiar taxi drivers expressed about them is any indication.

For people outside the Americas, Panama City is not an automatic tourist destination, so hosting WYD was an opportunity for the city to put itself on the tourist map (and the fact of the present article is the self-evident result of that).

And Panama City is worth a few days’ visit. The Panama Canal, with its Miraflores Locks, is a marvel of engineering; the Metropolitan Park is a rainforest in the middle of a city; Panama Viejo is fascinating and Casco Viejo is lovely; the banking district’s skyscapers provide some architectural marvels (google F&F Tower for an example), as does the Biomuseum; and the Amador Causeway — made of rubble excavated during the building of the canal — provides for the unusual experience of being able to walk on terra firma to an island.

And then there are the people; these kind, always polite people who sound like they are reprimanding you when all they want to do is to help. These are the people whom every World Youth Day pilgrim had learnt to love.

Next Week: A visit to Cuba.