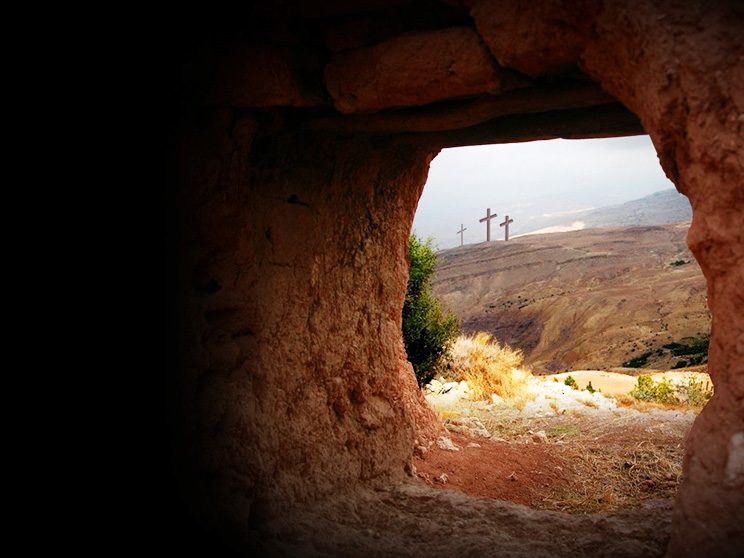 Together as humble people of hope, as people of the resurrection, we have journeyed with Jesus through the chaos, the pain and the bloodshed of Good Friday and the hushed Holy Saturday and into the dawn of a new day. We do not depend on ourselves, our tenacity and strength, our abilities or structures, we hold onto Jesus who goes before us.

Let us think carefully of the Angels accusation “Why do you seek the living among the dead?”

Journeying through Good Friday with the sick and the dying is a privilege; learning compassion in our shared human story. This is our inherent human dignity that we cradle in our hands as a busy world looks the other way; let’s not talk about death.

The last year that I spent as pastor at the Ladysmith Parish, the community and I journeyed with a young woman on her pilgrimage through the various stages of terminal cancer. As her strength slowly slipped away, the weekly Thursday morning masses she attended became more and more difficult. She constantly reminded me that her goal was to be able to attend the celebrations of Easter Sunday morning. The peace garden that had been established in memory of my late brother Shaun became a sanctuary for many walking that same road.

Easter Sunday morning arrived as so many times before, yet now there was a new light shimmering. This is the same light that each one of us will come face to face with. That translucent moment between life and death, between what is imminent and what is transcendent. There were no easy words as we embraced on the church steps on that Easter Sunday morning. I thought of the death of my younger brother Shaun who had died earlier in that year, so that all I could whisper into her ear; “death is not the end; death is not the end!”

I have spent the last few years in my own journey through illness that has been teaching me to let go of that pesky ‘illusion of being in control’; learning again like a child what I am capable of doing and the things I have to let go of.

Philosophy tells us that when we as human beings suffer we suffer as a whole human being; emotional, cognitive and spiritual suffering. We do not only suffer from bodily illnesses, physical pain, and the lack of decent opportunities to satisfy our basic vital, social and emotional needs, we also suffer when we are not able to experience and grasp any meaning of our suffering.

Suffering from the lack for the sense of the meaning of life is a special form of suffering. Although all human beings share the same basic human need for some meaning of life, the fulfilment of this need is highly individual and personal. I have witnessed some who suffered terribly, clinging to life or belongings, clinging to their own dying image of importance and achievements.

When Pope emeritus Benedict XVI opened his office to the world to answer questions from ordinary people. A Japanese child asked about the reasons for the suffering of the children. A Muslim woman from the Ivory Coast asked about the ordeal of women in conflict. These are the questions of the world’s children, women and displaced peoples; the innocent victims of disaster, wars and violence; “why this terrible suffering?”

The pope replied that these were his own questions also. These are the questions that the Gospels must answer; the suffering and the sorrow following the violence suffered by the innocent God/man who aligns himself with all innocent victims who cry out, “Why?”

In his apostolic letter SALVIFICI DOLORIS, Pope John Paul II asserted: This is the meaning of suffering, which is truly supernatural and at the same time human. It is supernatural because it is rooted in the divine mystery of the Redemption of the world, and it is likewise deeply human, because in it the person discovers themselves, their own humanity, their own dignity, their own mission.

This is particularly poignant in a world that relegates all illness, disease, ageing and suffering to the room of forgetfulness as something completely without value; something to be overcome!

Robert Browning Hamilton expressed this thought so wonderfully in verse:

I walked a mile with Pleasure

She chatted all the way,

But left me none the wiser

For all she had to say.

I walked a mile with Sorrow

And ne’er a word said she;

But oh, the things I learned from her

When Sorrow walked with me!

Without hope there is only despair. There has to be meaning; a purpose! Look upon Jesus! We too can be SURPRISED BY JOY with Christ’s resurrection, the promise of our own resurrection. This is the choice between despair and hope. Our sorrow, darkness and despair defeated by the SURPRISING, JOYFUL NEWS OF THE RESURRECTION.

As we, that very disciple that Jesus loves, gaze into the empty tomb and believe, our fear is also transformed into Easter Joy. God has shown us a new way; revealed to us a new ending to our own story. Just as Jesus human suffering has been transformed, so also our own suffering and passion will be transformed by God into the joy of Easter resurrection.

The resurrection of Jesus the Christ in the body, spirit and body entwined, earthly and divine is the final template of what we too are called to become. This is not some disembodied spirit, but fully a person. Death has been overcome and now for me also the world will never be the same again.

On this Easter Sunday of the resurrection, we pray for those who find themselves trapped in darkness and despair:

Let your gaze move from the cross to the mural of the resurrection to witness to the Light coming out of the tomb. You are a follower of Jesus and you also are the beloved disciple!

Jesus says to you, his beloved disciple, “this is where your hope and joy is to be found and I am going to prepare a place for you also so that where ‘I am’, you also may be”. This is the promise of Jesus in whom we trust. Darkness, evil and death have been overcome and for you and for me, the world will never be the same again. Even in the midst of turmoil and unspeakable evil, Jesus the Christ is risen from the dead, evil is overcome by Love and the world will never be the same again.

Hope and joy replace the fear of the dark tomb so that our lives in this world, the lives of Jesus’ beloved disciple, may be lived in the light of this new revelation.