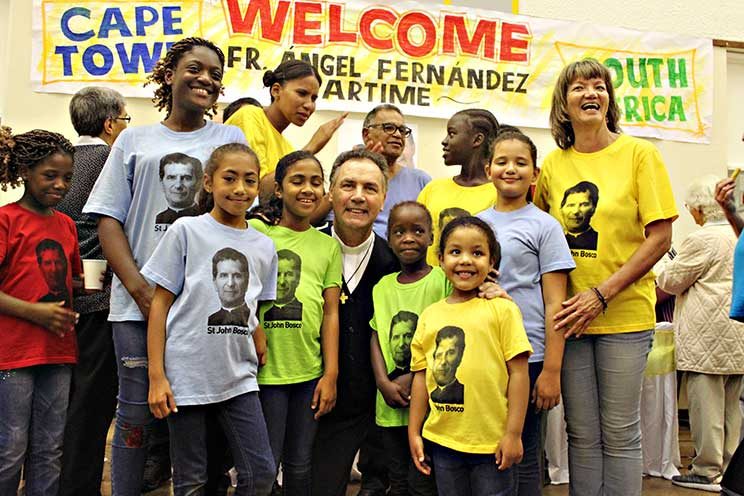 Rector major Fr Artime has 134 countries with a Salesian presence under his leadership.

The first stop in South Africa was the Learn To Live School of Skills at the Salesian Institute in Green Point, Cape Town, where he thanked learners and staff for their welcome.

“We are all of us part of a big family,” Fr Artime said, “and I want to emphasise the unity among us. It is not so much the magnitude of our work but the communion we share. This is important.”

Fr Artime told the youngsters gathered that Salesians founder Don Bosco had the dream of achieving great things for the young. “We need young people who are willing to help those with doubts. Jesus needs young people like you to communicate his message to others,” he said.

In Johannesburg, Fr Artime met members of the Salesian Youth Movement of Gauteng, and commended local volunteers who give one year in service to other young people. “In their life they give their own lives as a gift to others,” he said.

He urged the youth to know Jesus: “Don’t ever live without Jesus, even in difficult situations, don’t ever leave Jesus.”

“Holiness means to live like the disciples of Jesus,” he said. “Do you have to do miracles? No. It is simply the miracle of serving, the miracle of giving a smile, listening to the young person who is lonely, having eyes to see how others are. When you live like this, you are happy!”

Fr Artime arrived in Maputsoe, Lesotho, as rain soaked the landscape. This prompted the people of Lesotho to give him a fitting Sesotho name, Motlalepula, which means “the one who brings/comes with rain”.

The rector major met the Salesian family and members of the youth movement.

The Salesians of Southern Africa said they had experienced a moment of grace during Fr Artime’s visit, and would continue to pray for him on his many other trips around the world.