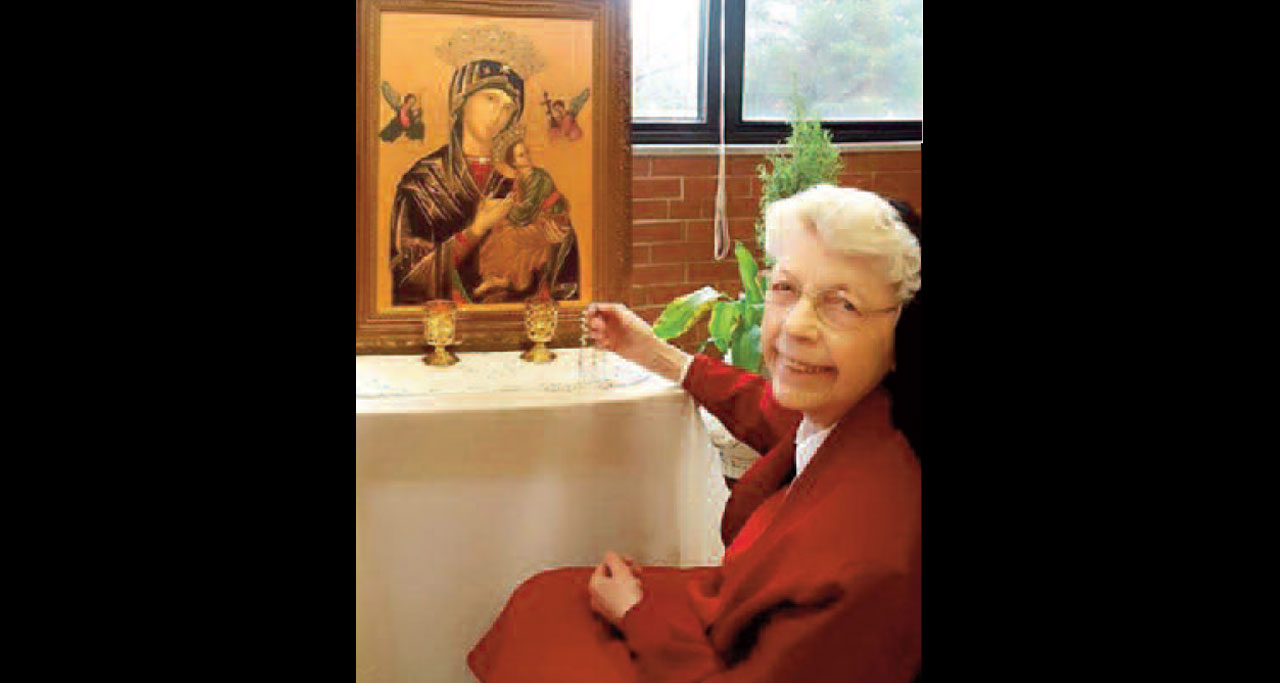 By Sr Ann Marie CSsR  – Redemptoristine Sister Eleanor Wilkinson died on May 13 in Missouri in the US at the age of 85.

Sr Eleanor headed the Redemptoristine community of four contemplative nuns in South Africa from 1991 until 2010.

She was born in Montreal, Quebec, Canada, into a large and loving Catholic family on December 12, 1934. Her lovely voice — which remained with her almost to the end of her life — was fostered by her father, who played the organ at church, and the weekly singalongs the family enjoyed.

Early on, she felt a call to be a contemplative nun—to give her life in prayer and praise. A Redemptorist visiting their parish told her about the Redemptoristines, so she and her mother went to the monastery in Barrie, Ontario, Canada, in 1954. Sr Eleanor said that she knew this was the place God was calling her to as soon as she stepped in the front door.

She made vows and received the name Sr Mary Julia of the Divine Word (Julia after the foundress) in 1957. A foundation was established in Liguori, Missouri, in the US, in April 1960, and Sr Eleanor was shocked when she was chosen as novice mistress, a delegated job usually reserved for a Sister who had been professed longer.

She often mentioned how grateful she was for the wise spiritual guidance given by Fr Donald Miller during those confusing times of religious life right after Vatican II.

When a new foundation was established in the South African Province in 1991, Sr Eleanor was selected as founder, and was sent with Sr Alice.

Archbishop Denis Hurley and his successor Archbishop Wilfrid Napier welcomed them to Bergville, at the foot of the Drakensberg bordering Lesotho.

As Sr Eleanor saw the shepherds leading their sheep along the mountains, she thought of the ideal name for the new monastery: Jesus, the Wayfarer.

For their remunerative work, the Sisters mounted icon prints on wood. The Redemptorists used these plaques during their missions, and people bought them and proudly hung them in their homes.

The favourite one was Our Mother of Perpetual Help, which has an association with the Redemptorists.

“Contemplative” was not a common word for the local people, so they called the Redemptoristines the “Church Ladies, the Ladies that Pray”.

It was deep sorrow for Sr Eleanor when lack of vocations and health issues brought the foundation to an end in August 2010.

The following year, having returned to the US, she was elected prior at Liguori.

Her commitment was always strong, and community life and interest in her Sisters was blended with compassion, prayer and a listening ear.

Sr Eleanor’s influence was great through her many years as prior and formator. If she felt God was asking her to do something, she went forth in his will, accepting whatever charge the community gave her and doing her very best.

Several times, she was appointed to international Redemptoristine meetings.

Sr Eleanor’s earthly life ended in the same spirit that guided her through her 60-plus years of religious profession: I am here, Lord, to do your will.

She was buried in the Redemptorist cemetery in Liguori.