How to be a Christian Government 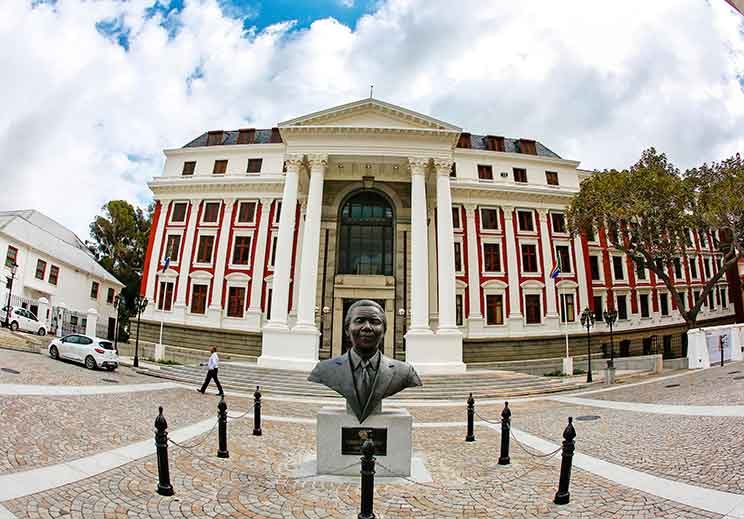 Parliament in Cape Town. How many principles of good Christian governance, as outlined in Prof Michael Ogunu’s article, are met there? (Photo: Nic Bothma, EPA/CNS)

Catholic teachings give a blueprint for good governments. As we approach the May 8 elections, Prof Michael Ogunu explains how.

The Church views politics as an important aspect of human life. The human person belongs to the earthly (temporal) as well as heavenly (divine) kingdom.

The public affairs of the earthly kingdom are what constitute politics. The success of public affairs calls for the existence of peace and justice. Therefore, Christians have a social responsibility in politics.

There are some basic Christian principles to guide the Christian in politics. The Catholic Church has a well-articulated Catholic Social Teachings which are based on the foundation of Scripture. The following are among the main items on this social teaching as regards political leadership:

Man is created in the image and likeness of God. Because of this, he enjoys some inalienable rights. No human being should ever be treated less than his dignity demands.

The African wisdom says, “I am because we are”, which means that unless I am in a community, I cannot survive. The fact that man lives in community raises the issues of rights and duties.

The power of rulers is also limited, on the other hand, with regard to the responsibilities of rulers to the people. Thus, the ruler has no absolute power over his people. He must respect their rights and serve the common good.

It is a basic principle of Catholic Social Teaching that society and especially rulers must take particular care of those who cannot take care of themselves, whether they be physically handicapped, mentally challenged or simply sick, old and aged.

The greatness of a nation is to be gauged by how it treats its weakest members, just as the strength of a chain depends on its weakest link.

This is important in a country where the poor and the weak tend to be totally neglected while the rich and the powerful are pampered beyond their needs and rights. The Bible is full of many injunctions calling for care and attention for the poor, the widows and orphans.

The following are some basic principles of good governance:

Participatory Democracy: A government has to listen to the diverse views of its people. It has to consult the citizens from the grassroots before making major decisions.

Listening to the views of others, analysing and synthesising them is imperative. Democracy is listening and including the majority while accommodating the minority, then coming up with one whole idea. The people must agree on how they want to be governed.

A constitution, therefore, which is a country’s lifeline, must be community/people-owned. People must be governed through their will and consent.

Justice has to be dispensed without partiality. All are equal and have to be treated in the same way (cf Gal 3:28). No person should be discriminated against on account of gender, race, ethnicity, creed or disability. The dignity of all must be upheld; ideas and policies that are agreed upon should be implemented impartially. There has to be respect for the law by all.

Democratic principles must be clear and the will of the people must be supreme if it is in accordance with the will of God.

The rights and duties of the individual, of the family and of the community are contained in the natural and revealed laws of God. The happiness of the individual and the family depends on the recognition of the peoples’ observance of these laws based on the constitution. These must be respected and upheld by good governance.

Visionary Leadership: Visionary leadership is crucial in the running of any country. It must be beneficial to all and must promote the common good.

Effective governance must give direction. It must have a vision for the country. Presupposing respect for all persons, focusing on the social wellbeing and development of every person and promoting peace at all levels of the political community. This is good governance.

Leadership with vision has to point to and lead the nation to higher ideals: “Show them the way they must follow and what their course must be” (Ex 18:20).

Good governance ensures that sectors such as agriculture, education, health, and natural resources have sustainable plans. It must be able to effectively address issues of unemployment, just wages, gender, justice and a sustainable economy.

It should not set precedents where well-connected people plunder national institutions in the belief that their actions will be later regularised to make it respectable wealth.

Good governance has to create a conducive environment for the economic development of the people. A visionary leadership devotes its energies to holistic development as opposed to dividing people. The welfare of its peoples is at the centre of priorities.

Integrity and Credibility: Good governance should be credible. This is through social integrity, honesty, faithfulness, and truthfulness in the management of public and private affairs of the country. It must be seen to be hardworking. “Sincerity and truth is what you require. Fill your mind with wisdom” (Ps 51:6; 91:4; 2 Tim 2:22-25). Everything else will fall into place.

Promote Cohesiveness: A cohesive society is mandatory for development and promotion of the common good. Effective governance must create harmony within the nation and its institutions.

This is by respecting the right to different opinions, association, movement and ownership of private property, as well as right to life and bodily integrity.

It should also promote the right to necessities of life and decent living. Good governance has to lead to happiness, peace, prosperity for the individual, family, community and the nation at large.

Good governance must create responsible citizens by promoting solidarity, patriotism and respect for others thus leading to unity among the people.

As St Paul states: “Do your best to preserve the unity which the spirit gives by means of the peace that binds you together” (Eph 4:3).

Equitable Distribution of Resources: A country’s resources must be shared by all, exploited for the benefit of the people and the country.

A country’s most precious resource is her people. Therefore, a responsible government has to provide for its people’s shelter, food, education, health and development.

It has to practise fairness in employment; that is employment by merit.

Resources must be well-managed for the present and future generations through proper registration. Resources include land, water, forests and people. Natural resources should not be used to enrich a few individuals.

As St Peter states: “Behave like free men and never use your freedom as an excuse for wickedness. Have respect for everyone and love for your community, fear for God and honour the emperor” (1 Pet 2:16-17; cf Gal 5:1). This is social responsibility of freedom and prosperity.

Right to Vote Freely: Citizens have the sovereignty of choice. They have a right to elect their leaders and to drop them when they fail or do not measure up to the standards of the governed.

The government must meet the hopes and expectations of the electorate, otherwise it quits (cf Eph 6:9). Those in authority should always remember that they are “working for God when they fulfil their duties” (Rom 13:6).

Good governance has to vet sects and cults that are a threat to the wellbeing of its citizens. It must foster development, goodness, faith, knowledge, self-control, godliness, and brotherly and sisterly affection (cf 2 Pet 1:5-9).

Promotion and Protection of the Family: The family is the basic unit of any society. Its welfare has to be the priority of any responsible government.

A dependable government has to provide the necessities of life, food, shelter, health and education to its families. No child should miss school due to lack of school fees or shortage of schools.

No person should die from a curable illness due to expensive medicine or inaccessibility to health care; street families should be unheard of; family violence, child defilement and rape should be dealt with firmly by the law.

Good governance has to protect the born and unborn.

Sharing of Power: Good governance delegates power. It decentralises activities for effective service to the people. The delegation of power ensures that there is no temptation of setting personal interests against those of the community.

Delegation of power guarantees that the exercise of authority facilitates freedom and responsibility by all. Those in authority should exercise distribution of justice wisely.