Is This From Where Christ Ascended into Heaven? 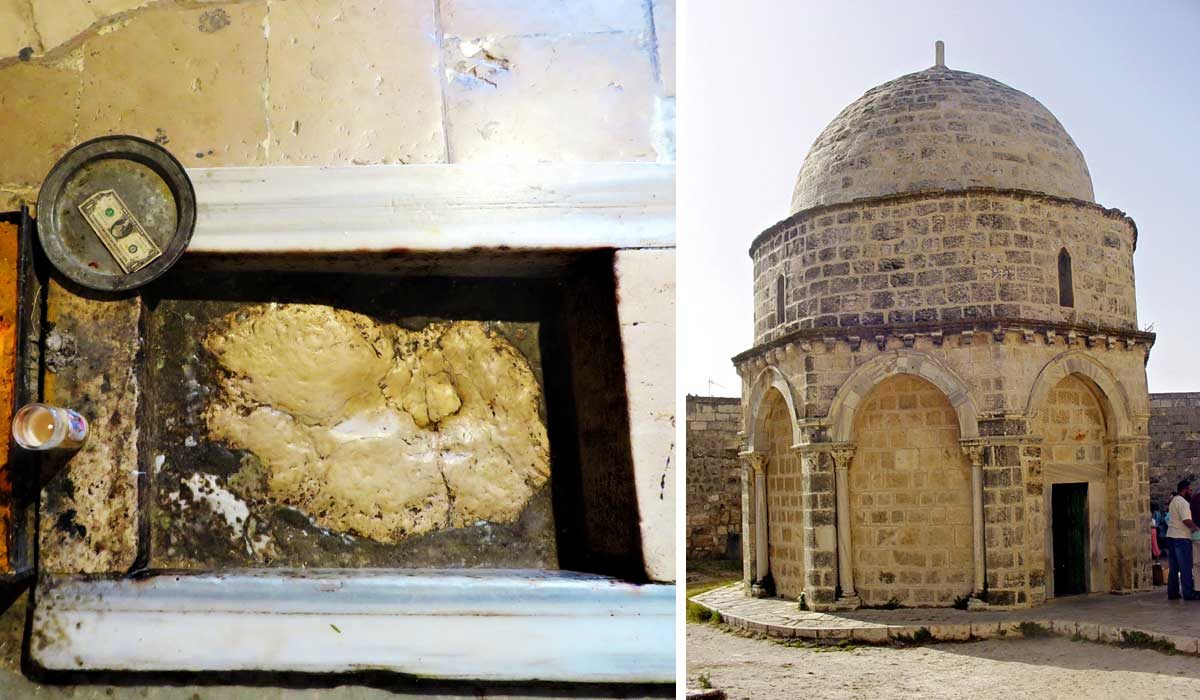 The reputed left footprint of Christ imprinted in a rock in the mosque-chapel of the Ascension on Mount of Olives, Jerusalem, seen right. (Photos: Günther Simmermacher)

Ancient tradition places the spot of Christ’s Ascension in a small mosque in Jerusalem, as Günther Simmermacher writes.

The Mount of Olives in Jerusalem marks at its foot the place of Jesus’ arrest, in the Garden of Gethsemane, and at the top the point where tradition places the Risen Christ ascending into heaven.

More than One Place?

Unlike most sacred shrines in the Holy Land, there is more than one credible claimant to the authentic location.

Before Christianity was legalised in 313 AD, Jerusalem’s Christians used a cave near the summit of the Mount of Olives for gatherings and Mass.

That cave was remembered as the place where Jesus taught the disciples the Lord’s Prayer, and it is still venerated as such in the Paternoster monastery complex.

Initially, the Ascension was commemorated at that place as well.

By the end of the 4th century, the pilgrim Egeria reported participating in a celebration of the Ascension a little further up the mount. In her description she mentions a footprint which tradition said was that of Jesus.

That church, like most churches in the Holy Land, was destroyed by the Persians in 614.

By the end of that century it was rebuilt. In 680, the pilgrim Bishop Arculf described what he saw: “A round building open to the sky, with three porticoes entered from the south. Eight lamps shone brightly at night through windows facing Jerusalem. Inside was a central edicule containing the footprints of Christ, plainly and clearly impressed in the dust, inside a railing.”

And we will come to those footprints in a moment.

In the 12th century, the Crusaders rebuilt the church on the ruins of the previous one.

The huge Crusader church was built without a roof, open to the sky, the better to allow the risen Christ to ascend symbolically in perpetuity.

After Saladin defeated the Crusaders in 1187, the basilica was at least partly demolished, with its exterior walls preserved, presumably to function as a fortification.

Muslims Believe in the Ascension

Muslims regard Jesus as a prophet and share our belief in the Ascension, so they converted the edicule which marked the spot of the Ascension to a mosque.

The bottom section of the structure we visit now is from the Crusader church, the upper part was built by Muslims.

But it was never used as a mosque because great numbers of Christians came to venerate here, as they would through the centuries. In a show of admirable magnanimity, the Muslims built another mosque next door instead for their celebration of the Ascension.

For the feast of the Ascension, Christians are now allowed to set up altars in the courtyard of the chapel, for worship and celebration.

The supposed footprints of Christ are preserved in a rock. What we can see now is the imprint of what vaguely resembles a left foot, the obvious implication being that the imprint was left by Christ’s Size 9 as he ascended.

The tradition of the left footprint and a matching right one was documented,  as mentioned earlier,  in the 4th century. The other footprint was taken by Muslims; some say to the Dome of the Rock.

Günther Simmermacher is the author of The Holy Land Trek.

2 Priests and Deacon for the Archdiocese of Cape Town!
Share